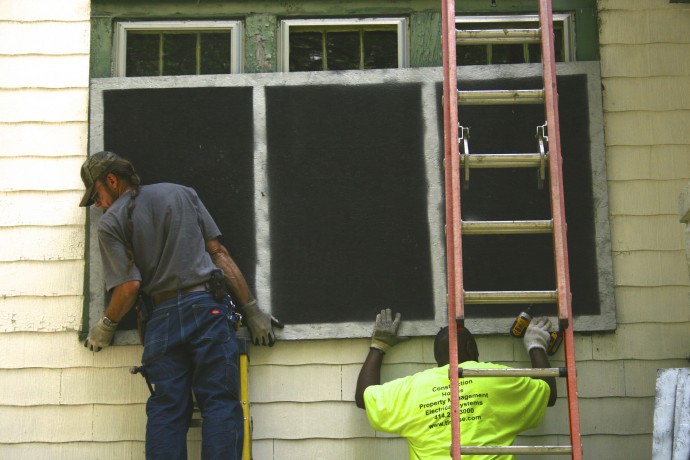 The foreclosed property on the corner of 24th Street and Chambers is different from many other abandoned properties in the city. It is not covered in trash, and its windows are not broken. Instead, the lawn is clean and the boards covering doors and windows are decorated.

Milwaukee was one of 23 cities nationwide that was awarded a grant last year from the Cities of Service Impact Volunteering Fund for Painting with Purpose (PwP), a project that engages local youth to clean up their neighborhoods and paint the boards on foreclosed houses.

Other partners include the Dominican Center for Women, Amani United, ArtWorks for Milwaukee, The Volunteer Center of Milwaukee and Jazale’s Art Studio. 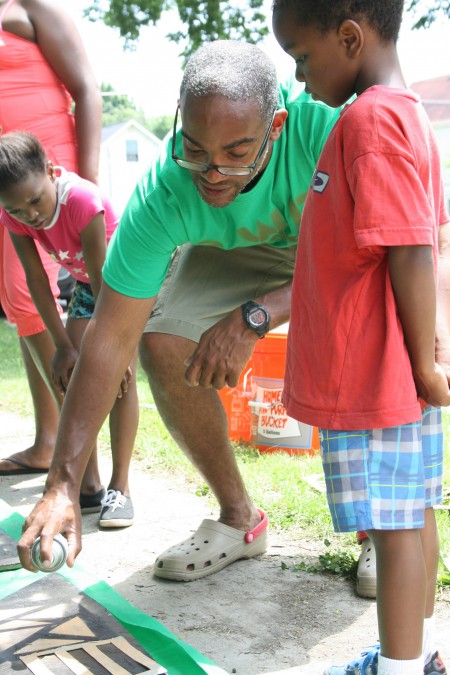 The project started last year when volunteers placed boards decorated by PwP on foreclosed houses around the city. According to Llanas, NIDC has now decided to focus on 40 properties in Amani, one of the five neighborhoods most heavily hit by foreclosures. Seven have been completed, she said.

Marvin Ealy, the volunteer recruiter, said the project seeks youth volunteers to inspire them to get involved in their community, and to gain work experience and skills.

“Who better to solve the problem than the youth who have to see it everyday, and grow up in the neighborhood?” said Vedale Hill, lead artist for PwP.

Hill and his volunteers used simple stencils to paint windows and doors on the boards, giving each house a different design. Hill explained that painting the boards on the foreclosed houses decreases the chance of break-ins.

There is not enough data yet to know whether the decorated boards decrease criminal activity, but according to Hill, the Milwaukee Police Department will release comparative information in the next few months.

Llanas said the designs seem to be keeping people from breaking in. Since the city’s pilot in 2013, there have been no break-ins at those properties. She added that the goal is to eventually put artistic boards on every foreclosed house in the city.

Hill said he hopes his artwork can help change people’s negative perceptions when it comes to abandoned properties.

“I want (people) to look at the houses we board up and stencil and feel like there is hope, and that there are possibilities for the neighborhood to advance,” Hill said.

Quan Caston, the assistant lead artist on the project and a teacher at NOVA High School, pointed out that the project also gives young people something to do.

“Every summer we have to deal with violence in our neighborhoods, particularly among young people, and we know that any kind of constructive activity can help,” Caston said. “There have been too many occasions where we leave in May and come back in September and someone is missing.”

Javin Smith, a 16-year-old PwP volunteer, said the project is more than painting boards for him.

“(The boards) are not just made for art. They are actually made to keep people from breaking into the houses,” Smith said. “We really shouldn’t have boards on the houses. We should have people living in them.”