You are here: Home / News / Arts and Recreation / Greater Together coalition unites to combat Milwaukee segregation
Share this... 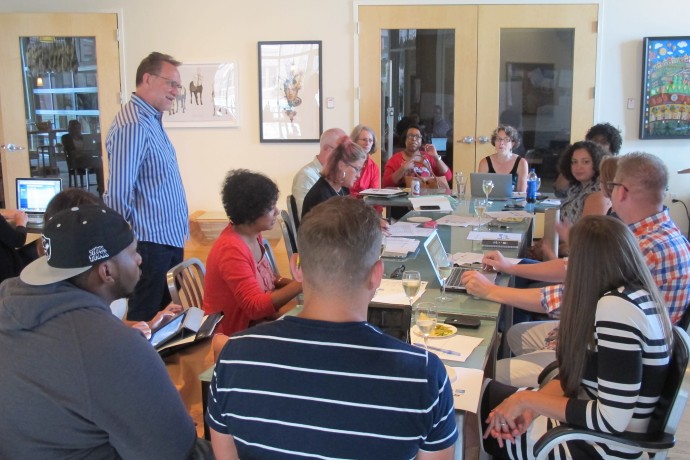 On a recent weeknight, a multi-cultural group of people gathered around a table to discuss an issue that some have spent years addressing, and others are confronting for the first time: segregation.

“I’m going to be the first one to admit that I don’t have the solutions and I am not the most knowledgeable person about it,” said the meeting’s facilitator, Hanson Dodge Creative CEO Ken Hanson. “I’m a pretty good designer, but I’m not necessarily an authority on this subject.”

Attendees were members of the newly founded initiative Greater Together, which is focused on addressing what they consider Milwaukee’s most pressing issue, racial inequality. The coalition comprises local designers and activists from a variety of backgrounds.

Hanson is the founder and former president of the American Institute of Graphic Arts (AIGA) chapter in Milwaukee. AIGA asked him to lead an effort that would commemorate the national organization’s 100th anniversary in a special way. 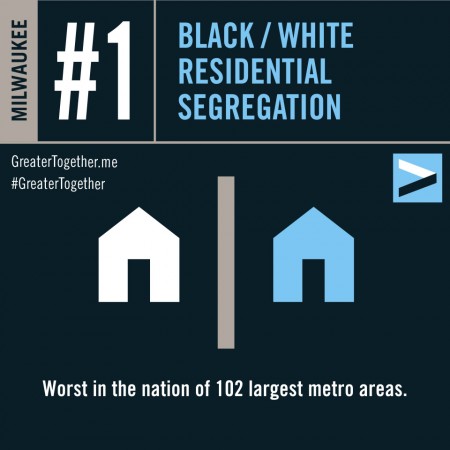 (Photo courtesy of Greater Together)

“I said ‘what if instead of looking backward, we look forward, and we thought about what we’d like the power of design to accomplish,’” Hanson said.

Inspired by recent stories by National Public Radio, the Huffington Post and the Milwaukee Journal Sentinel, Hanson decided to focus on segregation. But what started as a simple awareness campaign changed when NEWaukee Chief Idea Officer Jeremy Fojut pitched a competition for ideas designed to dismantle segregation, racial and economic inequality in greater Milwaukee.

“What I want to see is long-term systemic change and innovative solutions that can be funded,” Fojut said.

“That idea has morphed into this beautiful collaboration of people actually wanting to make a difference.”

The Greater Together Challenge kicks off at a news conference July 15 at City Hall. Submissions are due Sept. 7 and the 10 finalists will be named Sept. 14. Finalists will present their ideas publicly in early October. The coalition is seeking sponsors to fund implementation of the winning project or projects.

Fojut helped the coalition attract activist groups from around Milwaukee, such as the NAACP, ACLU, Milwaukee Teachers’ Education Association and Schools and Communities United.

“The activist community is incredibly dedicated and talented,” Hanson said. “They struggle with communication and marketing and building their audience. Designers are really good at helping with those things.”

No one wants to see the project succeed more than NAACP Milwaukee communications chair Lashawndra Vernon. At the meeting, she challenged Hanson and the coalition to take concrete steps to dismantle segregation.

Vernon said she wants to make sure the coalition is committed for the long haul. “At the core, I got involved because I’m really interested in making sure that race equity work dives deep,” she added.

NAACP Milwaukee president James Hall, an early supporter of the initiative, views Greater Together as different than anti-segregation projects he has seen in the past.

“There are many efforts where people get together and just talk about something,” he said. “This is actually bringing people together and doing things, trying to take some action steps.”

Hall said he is excited about the awareness the coalition is raising.

“Even in this meeting, all of the graphic design firms that are a part of AIGA, those are people who wouldn’t normally be talking about this,” he said. “If they’re talking about it and telling their friends, clients, colleagues and associates, it can’t help but raise awareness.”

Fojut said he believes in the group’s potential to make a long-term impact on the city.

“You don’t solve this problem overnight. … You’re talking generational shifts.” But if the coalition can inch toward reducing segregation with stepping stones along the way, it can change perceptions, Fojut said.

“I don’t want to be known as the city with the biggest segregation problem anymore.”