As children run around in the grass, adults sit comfortably in lawn chairs or sprawl out on blankets. As the band finishes a song, a woman in the crowd shouts out, “La Bamba! Play the La Bamba!” In response, the band begins to play. The audience cheers and some sing along.

This is what the Silver City Sounds of Summer is about, according to Natanael Martinez, economic development manager at Layton Boulevard West Neighbors (LBWN) and event coordinator. Sponsored LISC Milwaukee and Joy Global, the concerts offer the opportunity for neighbors to have fun and connect with one another for a couple hours a week.

For the past seven years, the Silver City neighborhood has hosted a free concert series on Wednesday evenings in July at Arlington Heights Park, 3429 W. Pierce St. Local bands perform, displaying various music styles and genres from week to week.

“Every year we do our best to create a diverse line-up because Silver City is one of Milwaukee’s most diverse neighborhoods,” Martinez said. “So we’d like to reflect that in the [musicians] we invite to play at the concert.” 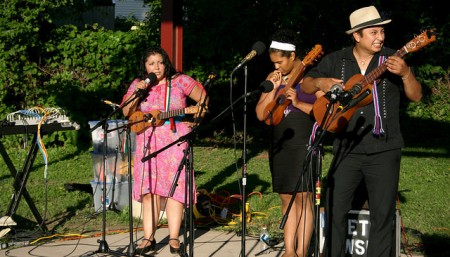 Linda Serna, a member of ¡Ay Cosita!!, said son jarocho is rooted in bringing people together.  “It’s not just music you play on a stage; it’s music to build (the) community,” she said.

According to Serna, fandangos, or sessions at which musicians play, sing and dance around a wooden platform, called a tarima. “It’s a way to interact with people — some times with someone that you’ve never even met,” she added.

Alternative folk rock singer Brett Newskialso performed at the concert. “Wisconsin is only nice for about four months out of the year, so any chance I get to play outdoors I take it,” Newski said.

This year, Artists Working in Education (A.W.E.) was invited to be part of the activities, bringing its Truck Studio to the concerts. The Truck Studio is a vehicle filled with art supplies that offers free hands-on art activities.

Beth Haskovec, executive director of A.W.E., said the studio allows children to explore their imaginations and brings the art directly to the young people.

“It’s an accessible program that reaches neighborhoods where children play,” Haskovec said. “They don’t need a permission slip, they don’t need transportation; the art is where they’re at.” The Truck Studio will be parked at Arlington Heights Park for the remainder of the concert series, from 6 p.m. until 8 p.m.

“I really love this concert series because we get to come make music and come make art,” said Kim Loper, lead artist at the Truck Studio.

Haskovec said she thinks incorporating the arts into communities is essential to the growth and positive development of neighborhoods.

“A way to beautify a neighborhood and get people together is to do something fun,” Haskovec said. “Everyone is happy to see you bring a van full of art supplies and provide an opportunity to people who might not have access to art supplies.”

Martinez said the goals of the concert series are for people to meet each other, and further revitalize the Silver City community.

“We want people to come to the concert series so they can see all of the great things the neighborhood has to offer,” Martinez said.