On two different occasions during the grand opening of their public art installation, “Listening to Mitchell,” Sonja Thomsen and Adam Carr were approached by former skeptics who apologized for doubting that the project would ever come to fruition.

Thomsen called the fact that there is a museum-quality sound space in a Mitchell Street storefront “magical.” 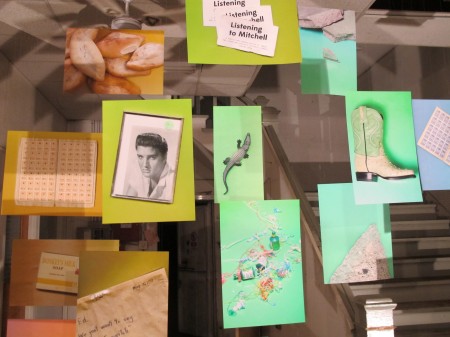 Hundreds of people attended the recent opening of “Listening to Mitchell,” featuring Thomsen’s visual art and Carr’s storytelling. The heart of the project is the storefront at 723 W. Mitchell St., but images span local businesses from 5th Street to 12th Street.

“The project is geared toward creating a lot of different entry points, not just going and shopping, but the stories, history and future of the place,” Carr said.

The venture represents the second public artwork collaboration between Thomsen and Carr. The first, “here, mothers are,” a profile of families connected to the Dominican Center for Women, consisted of artwork and storytelling across a foreclosed home and adjacent vacant lot in the Amani neighborhood in 2011.

Six months after the conclusion of “here, mothers are,” the pair discussed a bigger project on Mitchell Street. Their partnership comes naturally, Thomsen says.

“Our skill sets combine in an interesting way to create something that neither of one of us can do independently,” she said.

What followed was nearly two years of brainstorming, networking and interviewing to put their plan into motion. Thomsen and Carr received support for the project from the City of Milwaukee Arts Board,  Business Improvement District 4, the Zilber Family Foundation and many others, and recruited interns from the Milwaukee Institute of Art & Design and University of Wisconsin-Milwaukee.

Intern Maeve Jackson joined the effort in October 2013. Although she only planned to work on it for a semester, she enjoyed herself so much that she stayed on and became the project manager as well as the lead videography intern. She says she fell in love with “Listening to Mitchell” by watching the interview subjects tell their stories. 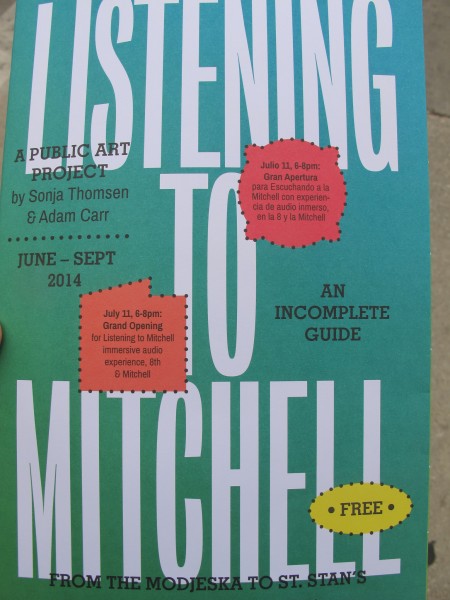 “From the first interview, we sat down and people just opened up,” Jackson said. “They were a little nervous in the beginning of the interview and not sure if they had anything important to say, but as they started talking and started sharing these moments from their past, this different side came out of them.”

Carr said he found himself learning something new every time he interviewed a local.

“My understanding of the place and what goes on there and how it got to be the way that it is kept getting challenged,” he said. “Any theory I had about what was going on there would always be altered by the next person we met and spoke to.”

The constantly changing view is a credit to the south side neighborhood’s diversity. Alderman Jose Perez, whose district includes Mitchell Street, likened its people and businesses to the United Nations and said that the installation captured that.

“It’s highlighting what makes Mitchell Street and the 12th District the diverse, wonderful place that it is,” he said.

Polly Morris, chair of the public art subcommittee of the City’s Arts Board, said the installation is successful because of the dedication and openness Thomsen and Carr brought to Mitchell Street.

“This was a project that had such a deep commitment from the artists to understanding the neighborhood and peeling back the layers of history,” she said. “We loved that they were engaging so fully with the community and they weren’t coming in with their agenda.”

The installation remains open on Thursdays, Fridays and Sundays through Aug. 10. Carr and Thomsen will host walking tours, both pre-planned and spontaneous, throughout the summer. The art will remain in storefronts through September.

Morris said the pair already has made a major impact in the neighborhood.

“What they built was not just these photographs and recordings,” she observed, “but a web of relationships between themselves and the people here.”