You are here: Home / Neighborhoods / North / Amani / Canvassers urge residents to vote in 53206, ‘ground zero’ for black incarceration
Share this... 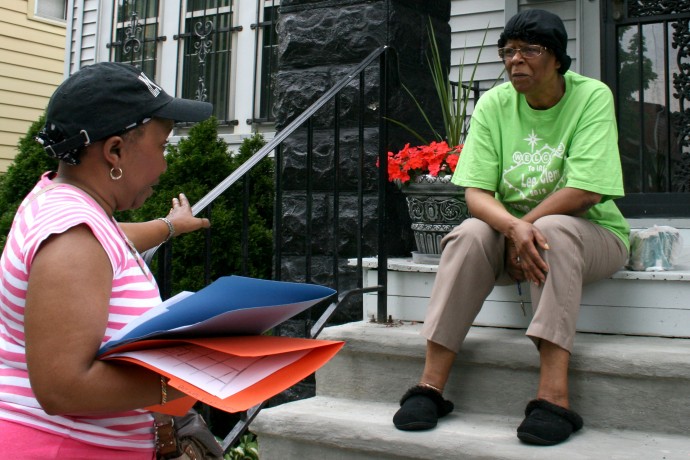 The last time Sandra and Wallace White canvassed a neighborhood, it was cold and sleeting. Last weekend, as the couple knocked on doors on behalf of MICAH’s 53206 Initiative, they were almost chased by two German shepherds.

“You’re brave for doing this,” a woman called from her porch.

“Someone has to do it,” Sandra White called back.

The ZIP code has the highest rate of incarceration of any ZIP code in Wisconsin, and among the highest in the nation, according to a study conducted by John Pawasarat and Lois Quinn by the University of Wisconsin-Milwaukee’s Employment and Training Institute.

Hoping to change the statistics, about 30 volunteers from WISDOM, the state affiliate of MICAH, and a half-dozen congregations went door to door in the area to inform residents about registering to vote in the primary election Aug. 12. State and county offices, including governor and county sheriff, will be on the ballot. Canvassers also asked community members about issues of concern to the neighborhood. 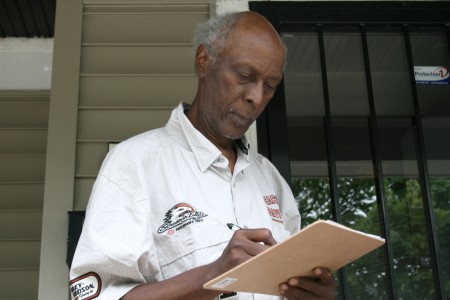 Michael Locklear, a resident of ZIP code 53206, fills out a pledge card stating he will vote in the upcoming election. (Photo by Hannah Byron)

Some canvassers were Volunteer Deputy Registrars and could register voters; however no one registered during the canvass. Some people who wanted to register were unable to provide adequate proof of residency. Acceptable documentation includes a photo ID card issued by an employer or a utility bill with a name and Wisconsin address on it.

Roberts said it is important for community members to participate in the election process. She added that getting people registered and interested in voting would help decrease negative activities leading to arrests.

“When you think about it, people who want to make the laws, (and) who want the opportunity to change laws are the people we vote into office,” Roberts said. “So we’re voting for people we think can make change for our community.”

Local volunteer Josh Dukes said he came out because he wants to see change.

“A lot of the stuff I’ve been seeing around just really bothers me, and I know that I can help out with it. I just really wanted to see people come together,” Dukes said.

In addition to discussing voter registration, volunteers were told to ask how people feel about prison reform. “We know that in the 53206 ZIP code that there is not a block that does not have someone who is affected by incarceration,” Roberts said.

Referring to ex-offenders, resident May Dunson told canvassers, “Everyone needs a second chance.” However, many residents said they do not know what prison reform means, and did not voice an opinion, according to Roberts.

Volunteers will continue the non-partisan canvass once a month until the general election. Roberts said she hopes that canvassing about the election will inspire more people to get involved with addressing other challenges in their community, such as gun violence and poverty.

“It’s good that everyone’s stepping up trying to make a change,” said volunteer Zoë StrozierBey, who goes to church in the neighborhood. “Hopefully we can have a good impact on others who want to change as well.”