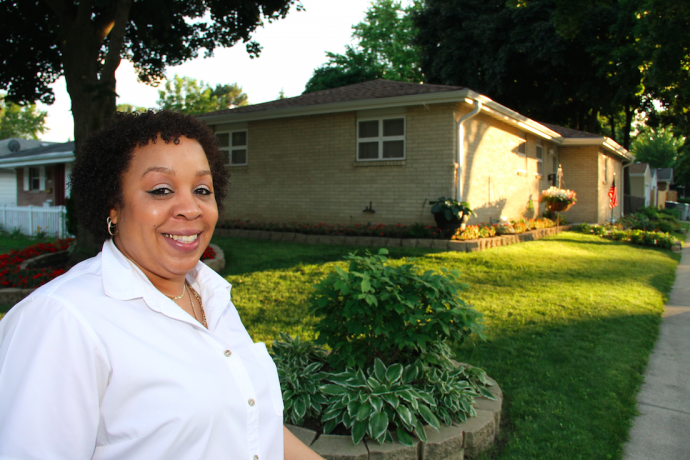 Linda Beard lives in the house that her mother purchased in 1994 with assistance from the city housing authority. (Photo courtesy of the Housing Authority of the City of Milwaukee)

Twenty years ago, Linda Beard’s mother, Minnie, was the first homeowner assisted by the Housing Authority of the City of Milwaukee to purchase a home. Although Minnie Beard passed away in 2009, Linda continues to live in the house on 51st Street and Hassel Lane, where she grows flowers just like her mother did.

Beard said her mother always dreamed of owning a home, and took her along to meetings to show her the process. Beard hopes to pass on the importance of homeownership to her own daughter, who is 19.

“I stress to her how hard my mom worked to get this,” Beard said. She wants her daughter to understand the importance of keeping Minnie’s dream alive. 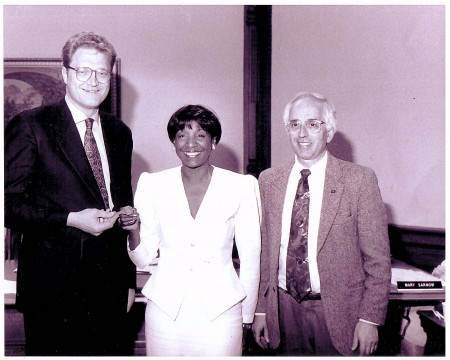 Minnie Beard, with former Mayor John Norquist and Alderman Don Richards, celebrated the purchase of her home in 1994. (Photo courtesy of the Housing Authority)

The homeownership program helps low-income families, most living in public housing, save for and purchase houses. All of the properties are recently renovated, single-family houses. Participants must have not owned a home in the past three years, and may be eligible for assistance on their down payment.

“We buy foreclosed properties, rehab them and sell those to our clients,” said Jim Eigenberger, senior asset manager, who oversees the program.

“We take care of our clients from application right on through closing,” he added.

John Barbosa purchased his home on 86th Street and Douglas Avenue in February. Barbosa said the homeownership program was a big help.

“It basically taught me to make sure all my ducks were in a row as far as having the house inspected and looking for the right type of loan,” Barbosa said.

“It was a great experience. I recommend it to everybody,” he added.

Barbosa, who previously lived in an apartment, said he was nervous about purchasing the house. “That is … one of the biggest steps you can make in your life.” He said it feels great to have a place to call his own.

During the past 20 years, the program has helped 470 families become homeowners in Milwaukee neighborhoods.

“It’s a huge milestone to me,” said Eigenberger, who has worked for HACM for 22 years. “Before the program started … residents didn’t even dream of homeownership. They were figuring to live their lives in public housing and that was the end of it.

“So to be standing here 20 years later with almost 500 families that have purchased homes is just huge,” he added.

Eigenberger said he hopes the homeownership program can continue to help make home ownership a reality.

“We took the same hit as the entire real estate market when the downturn happened, but … things are moving ahead in a positive direction,” he said. “I want it to continue forever.”