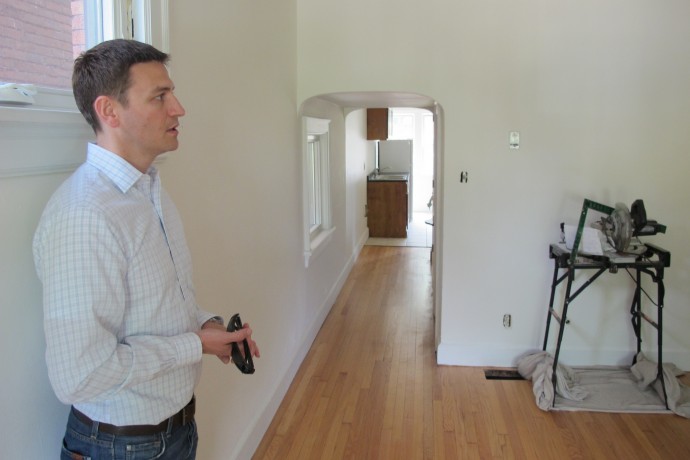 Utopia 136 developer Andrew Lasca leads a tour through an apartment in the firm’s new property. (Photo by Patrick Leary)

Standing outside his latest property in the Harambee neighborhood, developer Andrew Lasca pointed to a house three doors down that had fallen into disrepair.

“We want to make sure that that doesn’t happen again,” he said. “It’s better for all of Milwaukee to have more stable communities.”

Lasca and his business partner, Jes Skaug, co-founded an architectural development company, Utopia 136, in 2010. The two are just weeks from opening their second multi-family building in Harambee at 2518 N. 1st St. Their first project, a six-unit building at 136 W. Meinecke, was completed in 2012.

The three-story building on 1st Street, constructed in the 1920s as a single-family home, will house five families. Lasca and Skaug partnered with the Social Development Commission (SDC) and the Local Initiatives Support Corporation (LISC) to create affordable housing for neighborhood families.

“We’re not interested in pushing everybody out,” Lasca said. “There are a lot of people in this neighborhood that would qualify and deserve a decent home.” 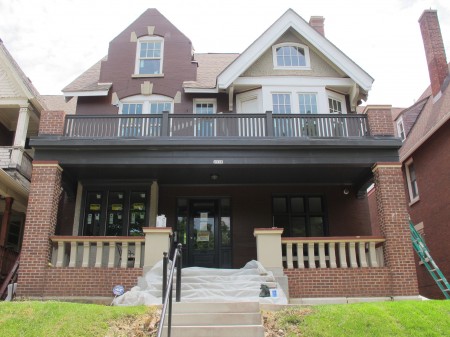 The partners worked closely with Milwaukee Preservation Commission planner Paul Jakubovich to restore many of the features that were removed from the historic building over the years.

“We’ve worked with historic preservation to come up with a color palette that was appropriate for the time,” Skaug said. “We installed wood windows that are close stylistically [to] the originals but perform with today’s standards of energy efficiency.”

Jakubovich noted that Lasca and Skaug chose to use naturally decay-resistant wood for the remodeled building, which drastically extends its structural lifespan.

“Today, you have to seek that wood out,” Jakubovich said. “You have to be very careful which wood you select. They’ve certainly taken all of that to heart.”

Lasca and Skaug said they have a good relationship with their tenants. “We’re not these landlords that show up to collect the rent and that’s it,” Skaug said.

They also try to build trust with the neighbors around the property. “They keep an eye on our building when we’re not here and if they see something that’s not right, they call us,” Skaug said. “If we didn’t have that sense of community, we wouldn’t have the ability to protect and preserve this building.”

Both men are Milwaukee natives, and both took a while to arrive at architecture as a career. Skaug fell in love with the buildings and infrastructure of Budapest while studying abroad to become a painter. Lasca lived all over the U.S. before returning to Milwaukee and drawing inspiration from his hometown’s historical buildings.

“We have a huge quantity of underutilized built structure that could help people and the city as a whole,” Lasca said.

The pair met at University of Wisconsin-Milwaukee in grad school and worked at a few architecture firms together before setting out on their own.

“We both got into architecture with very lofty ideas of how you can improve the social environment through the built environment,” Lasca said. “We are trying to do that through our work.”

Jakubovich, who has worked for the city for 20 years, appreciates the work Utopia 136 is doing.

“They’ve been great to work with,” he said. “We really welcome the investment that they’re making in this neighborhood.”

Once their second building opens Aug. 1, Lasca and Skaug plan to pursue bigger goals. They are in talks to acquire another property in Harambee, and dream of making nearby Martin Luther King Drive a thriving pedestrian street again.

“That’s a whole other ball of wax,” Skaug said. “We need more experience. We’ll get there.”