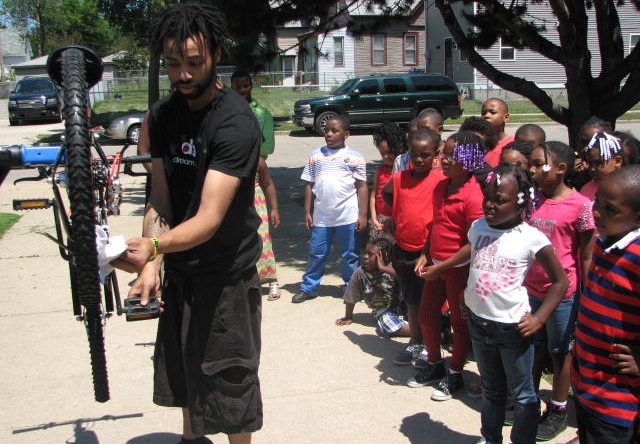 Stefhon Hubbard of DreamBikes demonstrates how to oil a bike chain as part of the “Fight for Bikes” program. (Photo by Brittany Carloni)

Sixty bikes were lined up against the wall at Gwen T. Jackson Early Childhood and Elementary School on a recent afternoon, ready for their new owners to claim them.

Thanks to the efforts of three young people from Neu-Life Community Development, children from the Lindsay Heights neighborhood who completed a weeklong bike class were given bikes, helmets, locks and a custom-designed bike map of their neighborhood. 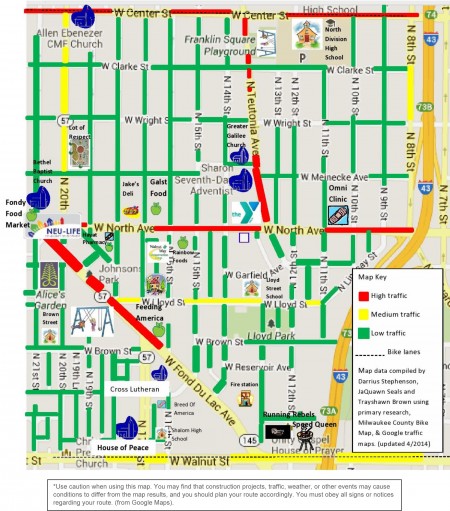 “We thought about it and me and some of the other teens and guys at the center were talking about how our bikes got stolen a lot and how people have messed-up bikes and they don’t know how to fix chains and stuff,” said Seals, 20.

DreamBikes, a nonprofit bike shop, provided the 60 bicycles. The organization collects donated bikes and equipment and trains teens to work in the shop. General manager Russell Jobs said he hopes the young people will take advantage of the freedom that comes with their new bikes.

“Hopefully a few of them get a chance to go explore their community a little bit more and have the freedom to go places farther than walking,” Jobs said.

Seals, Stephenson and Brown also created a kid-friendly bike map of Lindsay Heights, developed by biking through the community and researching the Milwaukee County Bike Map and Google traffic maps.

“We decided to do a bike ride around the Lindsay Heights area … and we paid attention to the traffic on the roads and how bumpy the roads are,” Seals said. 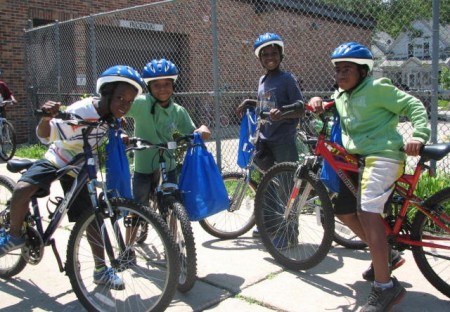 Stephenson, 18, said the map identifies places that kids can go if they need help, including gas stations and churches. Copies of the map will be available at DreamBikes and Valid Bike Shop.

After their final class session, participants were able to pick out a bike. Willie McDaniels, 10, couldn’t wait to start riding his new red “Roadmaster.” He plans to use the skills he learned during the program to take care of it.

“[I learned] to ride in the bike lanes and to ride with traffic and to always keep your helmet on and [get] locks for your bike so it won’t get taken,” he said.

“I’m excited to ride my bike. I’m going to lock it up, [and] make sure my wheels have enough air in them,” McDaniels added.

Anija Carson, 7, plans to have lots of fun on her new bike. “I’ll ride it with my friends,” Carson said.

Stephenson said it was great to pass on his interest in bikes to the youth in the classes. “As soon as they get their bikes … you get to see them smile a lot,” he added. “It’s a great feeling.”

Winners of the 2014 DreamBig! grants will be announced on Aug. 8 at the 4th Annual DreamBig! event at the Wisconsin Center. The event is free and open to the community.