You are here: Home / Home / Carousel / Team Alma bikes 418 miles in Iowa to raise awareness about domestic violence
Share this... 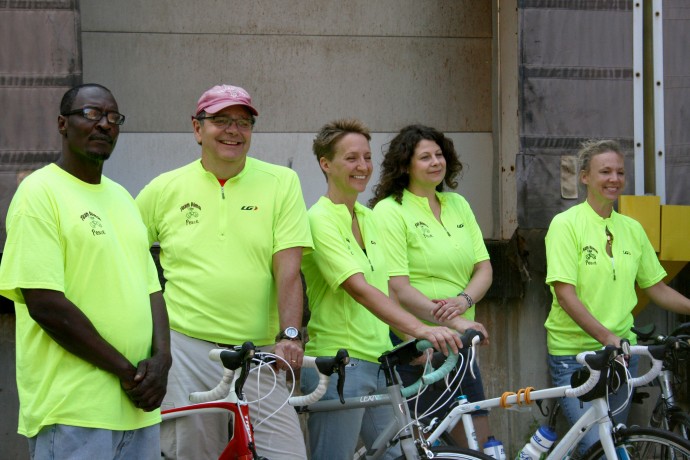 Dressed in fluorescent green jerseys, members of Team Alma loaded bikes and supplies into the back of a truck last week before embarking on a seven-day bike ride across Iowa to raise money and awareness about domestic violence.

RAGBRAI, the “Register’s Annual Great Bicycle Ride Across Iowa,” is an annual event sponsored by the Des Moines Register. The ride began on July 18, and will end on July 25.

Terri Strodthoff, founder and executive director of Alma Center, and Floyd Rowell, a peer mentor at the center, participated in the RAGBRAI ride last year.

Rowell admitted that he went into last year’s ride “kind of kicking and screaming.” He also recalled thinking he could not finish.

“I was about to quit on the second day, but mind over matter got me through it,” Rowell said. “Just one pedal at a time, and pretty soon it’s already been 100 miles.”

After conquering the 418-mile ride, Strodthoff and Rowell were determined to return and use the ride as an annual fundraiser for Alma Center. 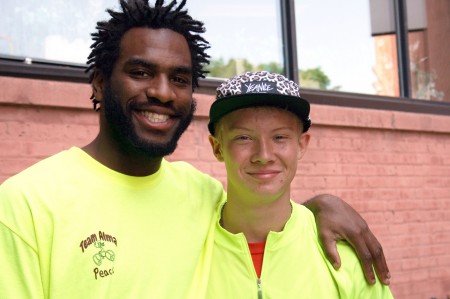 The organization sought pledges of a set amount per mile, according to Stephen Christopher, an administrative assistant at Alma Center. He was unable to provide information on how much money had been pledged.

According to Strodthoff, the money raised by the team will go to a program called Men Ending Violence. The program’s goal is to help men heal from family violence, and transform them into respectful partners and loving fathers.

Due to the spiritual growth Rowell said he felt during the ride, he wanted to motivate more people to join the team.

“Actually conquering it and knowing that you did this, that’s like memories you can’t take away right there,” Rowell said.

This year the team has grown from just Strodthoff and Rowell to nine members, three of whom are former convicts who have spent a combined 21 years behind bars. Since their release from prison, Rowell, Tratone Rogers and David Boyd have graduated from Alma Center programs, and use the methods they were taught to give back to the community.

“The Alma Center is not like a 9 to 5 [program] where you come in and then it’s 5, and they run you out the door like, ‘OK, don’t hit nobody,’” Rowell said. “The Alma Center went above and beyond for the men that they worked with.”

Rogers has been involved with the Alma Center since he was released from prison for armed robbery in 2012. Rogers said he wanted to join the bike team because it is a “once in a lifetime thing for me.”

Boyd also has been an active part of the Alma Center since he was released from prison in 2008 for armed robbery. Boyd said his role on Team Alma is to load and drive the truck.

“I’m looking forward to having a lot of fun, and to help the team out to accomplish their goals,” Boyd said.

Fourteen-year-old Trevor Grzeca was introduced to the cause by Strodthoff, his aunt, and has been training for the past two months.

Grzeca created an account on Indiegogo, an online funding site, to raise money for the center. According to the site, he has raised $635 so far, but hopes to reach his goal of $1,500.

Strodthoff hopes to get more people involved in future rides. She also wants to combat the stereotypes often associated with men who go through the center’s programs.

“The bike ride raises awareness of the work the center does,” Strodthoff said. But it also helps people view the men “as fellow human beings, not just as a statistic or a criminal.”