On a recent weekday afternoon, drumbeats and chants of “stop the violence” rang out as about 80 youth marched for peace through the streets near Westside Academy II, 1940 N. 36th St. Families sitting on their porches were treated to a parade of positive messages. Cheers filled the air as a car and bus on Lisbon Avenue honked their horns to support the marchers.

The West Side Peace Party was a project of the 27th Street West Drug Free Coalition Youth Council and Serve 2 Unite. The coalition, organized by Safe & Sound, works to reduce drug and alcohol use in youth and families. It also offers positive leadership opportunities for youth, such as the council, which is made up of middle and high school students. 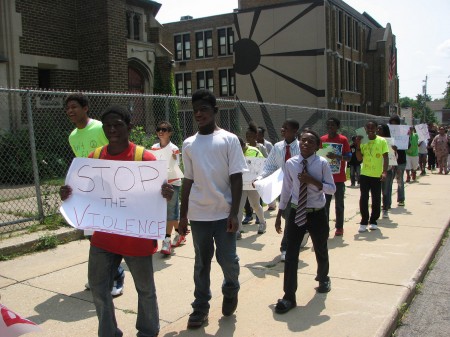 Youth march in the peace walk. (Photo by Brittany Carloni)

After the march, students displayed a mural proclaiming, “No drugs + No alcohol = No violence! Put the bad things down, put the peace signs up!”

Westside Academy students who are part of the youth council created the mural at the end of the school year, and planned the block party and peace walk to showcase it, according to Elena Burke, the drug-free communities manager at Safe & Sound.

“There’s a lot of violence happening right now and people are dying and it’s not OK,” said Taniya Boone, 12. “Peace is important to me because a lot of people in my life and around me have been hurt and it just needs to stop,” she added. Taniya is a member of the youth council and was an emcee at the event.

Jennifer Koss, a Westside Academy II teacher and group leader for the summer Community Learning Center, worked with the students to plan the block party and peace walk.

“I always tell the kids, ‘It’s us as adults that have kind of messed things up and it’s up to you as the kids to start fixing things.’“ Added Koss, “They need to step up so that the cycle of violence doesn’t continue, so the cycle of shootings and deaths and murders and funerals doesn’t just keep going.” 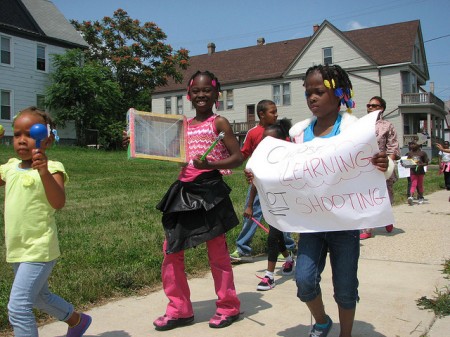 The peace walk began at Westside Academy II and stopped at a garden on 33rd St. and Lisbon Avenue. Youth held signs with messages such as, “Be a Bridge,” and “Let the Children Live,” as they marched through the streets.

Lakeya Yarbrough, 13, waved a sign that said, “Peace is My Responsibility.” “We need everyone to stop the violence,” said Lakeya, who attends Holy Redeemer Christian Academy.

Amir Ducksworth, 9, distributed fliers to spectators on the streets and chanted along with the other marchers. “Peace is important because they always shoot and stuff, so we need peace!” Amir said.

After returning from the walk, participants heard from Westside Academy II student Darvell Goodman, 13, who shared his hope for peace after traveling to Alabama and Mississippi on a civil rights field trip this summer.

“It’s better to be peaceful than violent because violence can get you in jail and peace cannot,” he said.

John Walton came to the block party to support his grandchildren, who participated in the peace walk. “I just came here to see what’s happening,” he said.

“It’s positive, I see that. They should probably have a block party every week.”