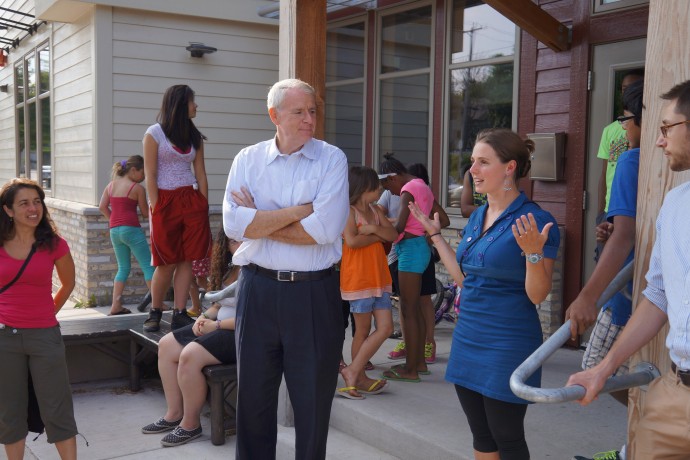 As Mayor Tom Barrett addressed an audience outside the Menomenee Valley branch of the Urban Ecology Center, he cracked wise about his “Walk 100 Miles in 100 Days” challenge.

“Thank you all for coming out and helping me fight middle age,” he said.

The 50 or so people in attendance, who gathered to walk through Three Bridges Park in the Layton Boulevard West neighborhood of Silver City, laughed as the mayor delivered his remarks. The group then walked the length of the park, helping the mayor add another mile to the tally he began in June.

The walk was the second of three that the Urban Ecology Center will host with Barrett this summer at each of its branches. Menomenee Valley Branch Manager Glenna Holstein was excited to have Barrett’s help attracting attention to the park, which opened last summer. 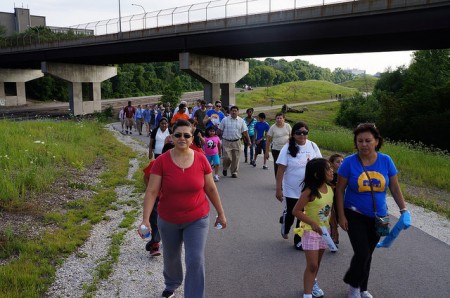 Milwaukeeans walk through Three Bridges Park as part of the mayor’s “100 Miles in 100 Days” challenge. (Photo by Patrick Leary)

Holstein said Three Bridges Park belongs to the residents of Milwaukee. “We are always excited to introduce people to this park. It’s everybody’s park, so we want as many people to know about it as possible.”

The group comprised Milwaukeeans from many ethnic backgrounds and walks of life. Most came because they believe in walking for one reason or another.

Martha Cuenca leads a community walking club through Latinos por la Salud, based at the Sixteenth Street Community Health Center. She brought a contingent of family and club members to walk through the park.

“[The walk] is promoting the same thing we’re promoting, and it’s promoting it citywide,” Cuenca said in Spanish, translated by Holstein. “It’s drawing attention to some of the challenges people are facing as well as the work we are doing.”

According to Cuenca, 75 percent of the people served by the Sixteenth Street Community Health Center are Latino, and many of them struggle with obesity.

“Our goal is to bring healthy eating programs to the community as well as opportunities for exercise that are free,” Cuenca said.

Jon Bales and his wife started going on bird walks following his retirement, and are volunteers at the Riverside Park branch of the Urban Ecology Center.

“We enjoy learning about birds, and it gives us an opportunity to be out in nature, which we enjoy doing, too,” Bales said. “Birding and walking are healthful activities.”

Keith Holt, southeast region director for the Wisconsin Bicycle Federation, came to the walk to promote the Share and Be Aware program, a collaboration between the Wisconsin Department of Transportation and the federation. The program aims to raise awareness about the Hank Aaron Trail and bike trail etiquette.

Holt said he was happy that the mayor’s program brought people out to the park to exercise. “It’s a really good catalyst,” he said.

Urban Ecology Center board president Ed Krishok joined the walk. “It’s great to see this park coming to life,” he said. “To be able to be out on a nice day and walk, it’s exciting.”

Ultimately, the event gave people from across Milwaukee a chance to enjoy the natural environment the Urban Ecology Center works so hard to promote.

“It’s a great way to get out and take a good 20-minute, half-an-hour walk through the beautiful neighborhoods and in this case, a beautiful park in the city,” Barrett said.