You are here: Home / News / Arts and Recreation / Day in and day out, paleteros ring bells for ice cream
Share this... 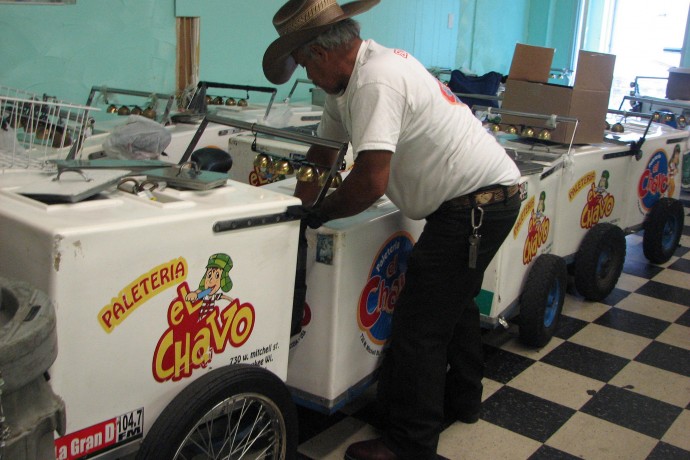 A paletero begins loading his cart for the day. (Photo by Brittany Carloni)

From our partners at OnMilwaukee.com: 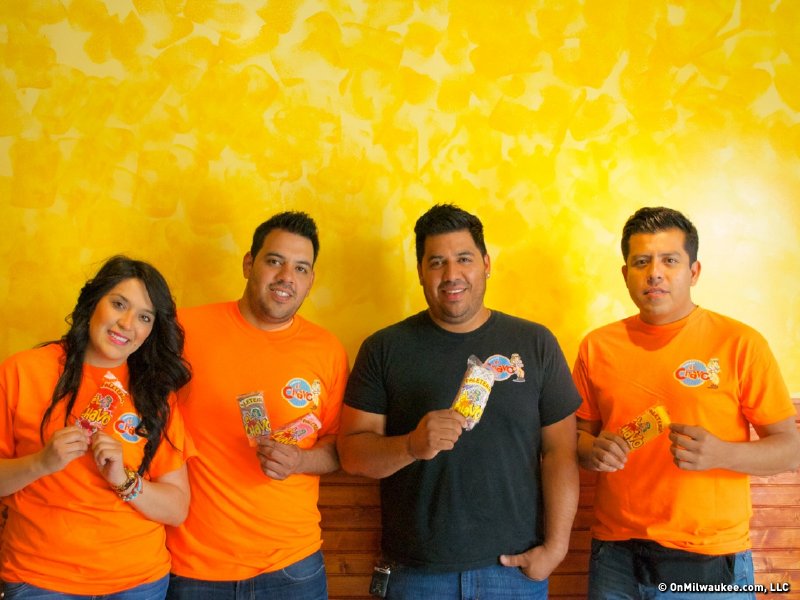 In 2000, Hershay Adan moved to Milwaukee from Guerrero, Mexico. His plan was to eventually move back to Mexico, but he decided to stay and subsequently some of his family members moved here, too. Read More

Joshua Peguero, 14, pushes a paleta cart, its bells ringing, down the sidewalk near 6th Street and Cleveland Avenue on a recent cloudy morning. He suddenly stops, silencing the bells. After a while he shrugs his shoulders, turns and continues walking.

Because of the bells, “you have to always wonder if someone is calling you,” Joshua  explained.

Joshua is a paletero, a worker who sells ice cream treats, called paletas, from Paleteria El Chavo, 730 W. Mitchell St. New to the paleta business this summer, Joshua works every day of the week except Saturdays. His days begin at 8 a.m. when El Chavo opens its doors.

Owned by brothers Hershay and Rene Adan, El Chavo, opened in 2008 after Hershay left his job at another paleteria shop. Rene is in charge of the kitchen and Hershay takes care of the paleteros.

Hershay describes El Chavo as a family business. “Not because my brother and I are here, but because that’s how we try to be here,” he said.

The paleteros start their day by choosing a cart, cleaning it off and collecting paletas from the storage freezers on a blue wooden shelving piece. They take a stack of paletas from the freezer, stop at the desk and inform the manager how many ice creams they have taken. This continues until the cart is full.

Joshua takes his cart out early, but often doesn’t get any customers until the lunch hour.

“I usually start selling at 12 o’clock. Sometimes I will sit in front of my house in the morning and then I’ll start walking around,” he said.

The teen, who will attend Hamilton High School in the fall, began working for El Chavo the second weekend of July. As a new paletero, he is quiet and doesn’t always participate in the banter among the paleteros in the store. On a recent morning when Joshua was walking through Kosciuszko Park, he saw another paletero across the street and joked that paleteros will sometimes “mean mug” each other for being in the same area. 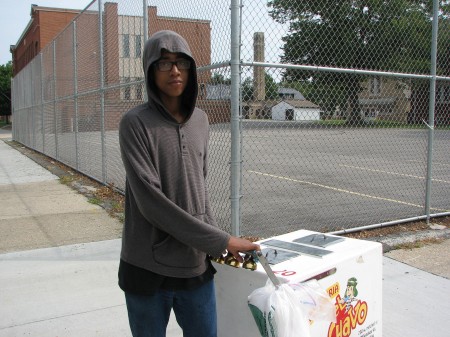 Joshua Peguero pushes his paleta cart through the streets. (Photo by Brittany Carloni)

Joshua often runs into children who are excited to see him coming down the street with his cart. “Sometimes, when I have money of my own, I may give a paleta to a kid for free. Only when it’s one kid though,” he said.

One day, Joshua hopes to be a video game designer, but for right now, he’s happy with his job. “I like walking around and getting to meet new people because then you can broaden your horizons,” he said.

Tyrone Robinson, 56, is a paletero on holidays and weekends. During the week he works at EFCO Finishing in Butler, Wis., and he also takes college courses at the Milwaukee campus of Upper Iowa University. He wants to be a social worker because he likes to work with kids.

Robinson has been with El Chavo for about three years, and worked for another paleteria before it closed.

“Working for El Chavo, is like the best fun I have, every summer, he said. “I may miss a day because I may be tired, but believe me, when I come in I have my goals set. My goals are that I want to make this certain amount of money for me to … take care of my family, and I make it,” Robinson said. The paleteros make 50 percent of whatever they sell during the day. Paletas are sold for $1.50 and ice cream cups and tubes are $1.75.

Robinson, who is African-American, does not speak Spanish. However, he connects well with the owners and the other paleteros at El Chavo, many of whom speak little English. 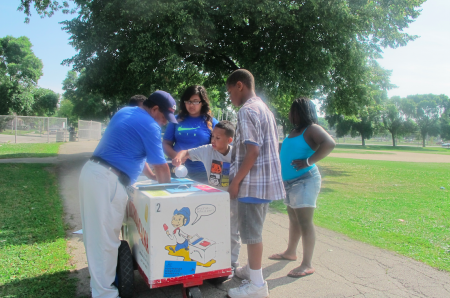 “They treat me like family. I have no problems with nobody here. They’re good people to work with. If I need something I can just ask for it,” he said.

Robinson lives in West Allis, and either walks or takes a bus to the shop. He travels far with his cart during the day, often walking five miles or more to Cold Spring Road or 51st and Layton. Robinson doesn’t mind the walking. “As long as I have some water, an energy drink, I’m good. I’m like a little camel. I drink enough water that I’m good for about six, seven hours. Then, I’m back,” he said.

For Robinson, the best part of working as a paletero is interacting with the community and talking with different kinds of people. Robinson said he loves to meet new people and start a conversation with his customers, whether they are new or regulars.

“When I go out on a job and some people are like, ‘man, you are the only black paleta pusher I see.’ Yeah, well, you know, it’s something that I like doing. I like meeting people,” he said.

About 7 p.m., Robinson and the other paleteros return to the shop, often joking and talking with one another about their day. They unload their carts with the same blue wooden shelving piece they used to fill their carts earlier, and tell the manager the number of ice cream treats they are putting back into the freezers. The manager counts how many paletas were sold and pays the paleteros, who take their money and leave for the day. At 8 a.m. the next day, the doors open, the bells start ringing and a new day begins.