You are here: Home / Home / Carousel / ‘I Have a Dream’ program highlights health and wellness at block party
Share this...

In the middle of 28th and Clarke streets in Metcalfe Park, dozens of children and adults gathered to dance, paint faces and educate each other about health.

“In African-American communities, health and wellness is very important. People have a lot of different deficiencies,” said David Comer, program director of I Have a Dream Foundation-Milwaukee,” which hosted the party.

The block party was the second annual event hosted by the organization, which has mentored a group of children at Clarke Street School since 2008. I Have a Dream and its co-host, the Boys and Girls Clubs of Greater Milwaukee, invited community partners such as Children’s Hospital of Wisconsin and Susan G. Komen for the Cure to run information booths along 28th Street. 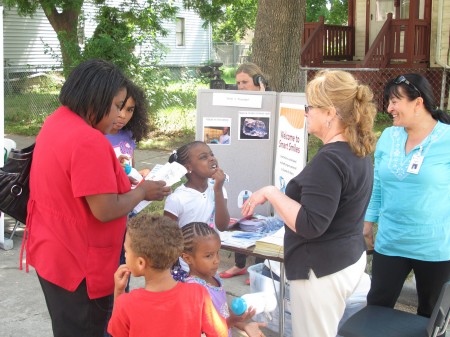 A young girl shows off her teeth at a dental hygiene booth at the I Have a Dream Foundation block party. (Photo by Patrick Leary)

The I Have a Dream Foundation came to Milwaukee in 2008, when Mayor Tom Barrett and local philanthropists began a program to support then-first and second graders until they graduate from college. The program began in Harlem in 1981 and operates in 17 cities worldwide.

The idea for the block party started when the “dreamers,” the 20 students in the program, put in a garden in a formerly vacant lot across from the school. Comer saw the garden as an opportunity to do more for the community.

“We have a bigger vision,” he said. “Once we got involved in the garden, nutrition, and health and wellness we said, ‘We can go a little further.’ And so we decided to host a block party.”

This year, I Have a Dream expanded its reach and invited more than a dozen community health and wellness organizations.

“It’s like a showcase,” Comer said. “We want to show people some of the positive things other people are doing in light of so much negativity that’s being presented in the media.”

Michelle Lipsey’s daughter Juanita joined the I Have a Dream program in second grade. Lipsey distributed information about Herbalife nutrition products at her table, explaining that she wanted to share her own weight loss success with her neighbors.

“We as a people have health issues that we don’t address,” Lipsey said. “I think this event is important because it highlights the things we should take care of.” 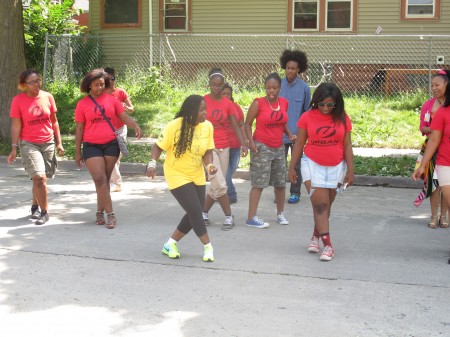 An I Have a Dream program staff member teaches people a dance to music blaring over the loud speaker. (Photo by Patrick Leary)

Juanita Jara, a nutrition educator at the University of Wisconsin Extension, attended to spread the word about healthy eating habits and obesity.

“We’re getting the information about obesity to both the parent and the child, so they don’t clash and they have the same information,” she said.

Bregetta Wilson of Children’s Hospital of Wisconsin shared resources and information on everything from GED programs to foreclosures.

“I’m trying to get communities to come out and have something positive to do in their community and share resources around jobs, housing and education,” she said.

Clarke Street School principal Daryl Burns said that the I Have a Dream program means a great deal to his school and that the block party was a definite positive for a neighborhood that experienced violence earlier in the summer. Sierra Guyton, a 10-year old third grader at the school, was shot on the playground in May and died from her injuries in July.

“A block party is one way to get the community involved so that everyone knows there’s something good going on.”