You are here: Home / News / Arts and Recreation / Serve 2 Unite and Auschwitz museum staff members connect over nonviolence
Share this... 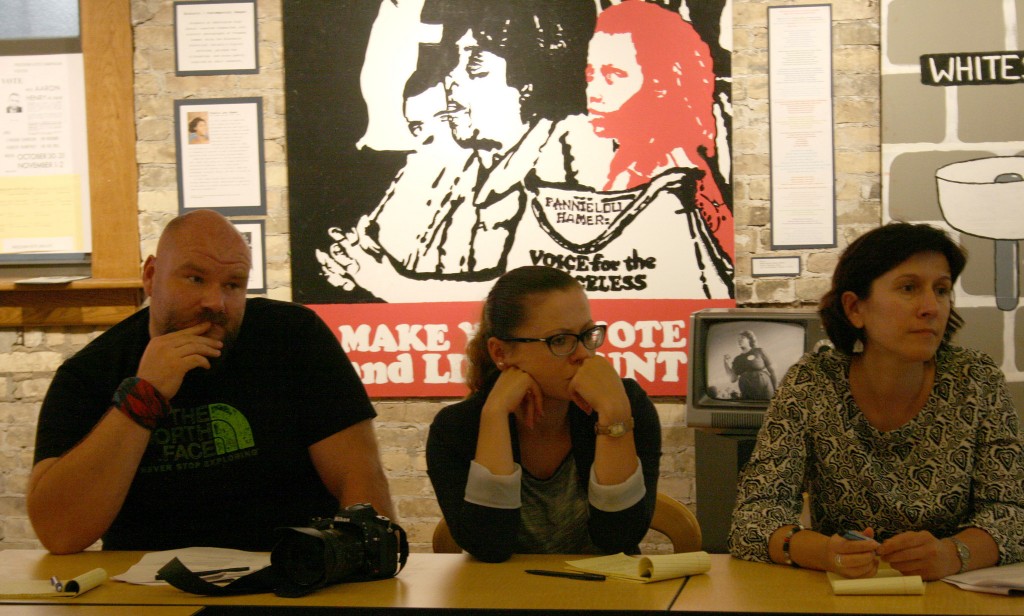 The gallery at Arts @ Large, with its walls displaying art inspired by the civil rights movement, seems like an appropriate setting for a discussion about how to create a nonviolent community.

The Polish group came to Milwaukee to learn how the nonprofit Serve 2 Unite (S2U), an affiliate of Arts @ Large, promotes nonviolence and empowers students to create strong communities based on mutual respect. According to Brianna Dorney, communications assistant at Arts @ Large, the group is the fourth from IVLP to visit the gallery and hear from S2U speakers.

Co-founder Pardeep Kaleka and Arno Michaelis spoke to the visitors about the organization, its engagement with local youth and nonviolent approaches to addressing conflict. 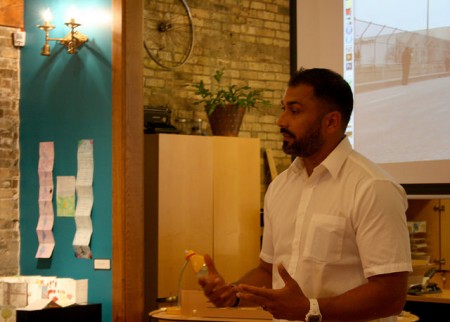 Kaleka and Michaelis talked about how they have dealt with violence in their own lives. Kaleka shared how the loss of his father in the Sikh temple shooting on Aug. 5, 2012, helped him understand the meaning of forgiveness. Michaelis explained his transition from being a member of white supremacy groups to leading a life of service and spreading love instead of hate.

“Telling personal stories is the best way to learn from each other,” Kaleka said.

Michaelis said meeting the guests was special for him. “It was an incredible honor to share the peace-building work of Serve 2 Unite with such amazing people who have dedicated themselves to the memory of those lost in the Holocaust and the families who still suffer,” Michaelis wrote in an email. “This is a pivotal time as those who bore witness to the atrocity first-hand age and die.”

During World War II, Auschwitz-Birkenau was a concentration and extermination camp. Historians estimate that between 1 and 1.5 million people perished in Auschwitz between 1940 and 1945. As many as 1.35 million of the victims were Jews. Bartosz Bartyzel, the spokesman for the Auschwitz-Birkenau museum, said today Auschwitz is not only a memorial, but also a place for education.

Bartyzel said the IVLP experience gave him and his colleagues the opportunity to learn about strategies they can adopt for their education programs, and to share their experiences with the people they meet in the U.S.

“Each meeting and experience like this enriches our ability to teach,” Bartyzel said, through interpreter Mikołaj Korzistka. “There is no one path to education, so we look at every organization we meet with, and look at the way they work and see how it could make us better.”

Dorney said she enjoys interacting with the international visitors. “It’s really a privilege to have these international delegations come to us,” Dorney said. “It’s an honor to be selected and share our work with them, and to be able to learn from their experiences too.”

The IVLP group began its three-week journey in Washington, D.C., before visiting Milwaukee, and will travel to Chicago and New York.

Bartyzel said educating visitors and students about the events that took place at Auschwitz can take an emotional toll, but believes it is necessary to teach others about the Holocaust and promote peace.

“It’s definitely difficult because the Holocaust was an unimaginable event, but it’s also work that gives us satisfaction to see the results we can achieve,” Bartyzel said.

“By teaching history, we … educate and bring up the younger generations.”