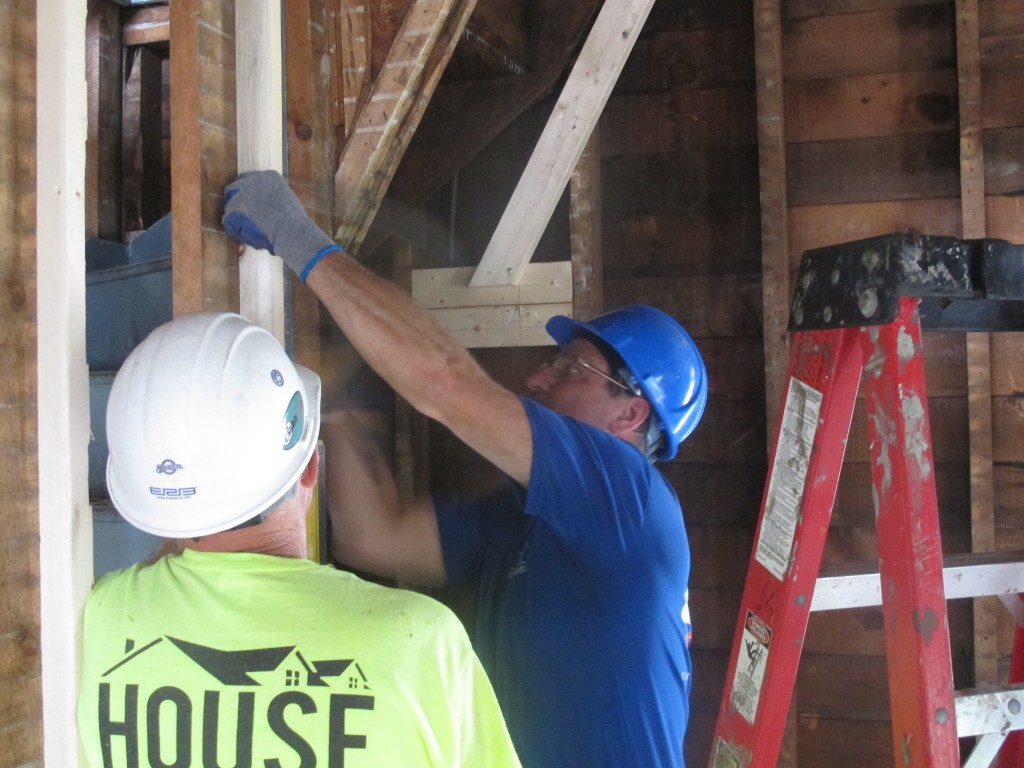 On a recent workday, Rob Lipski and other volunteers from the Wauwatosa Lowe’s Home Improvement branch stepped out of the office to help frame the interior of a Habitat for Humanity home.

“It allows us to give someone a chance to get closer to their dream home,” said Lipski, the store’s manager. “We want to help someone love where they live.”

Lakeisha Jackson and her four children will move into the five-bedroom home on the 2100 block of N. 33rd St., according to a Habitat spokesperson. Jackson could not be reached for comment.

Jackson’s is one of two houses in the Washington Park neighborhood being built with a $70,000 donation from Lowe’s to Milwaukee Habitat for Humanity. Both homes are expected to be completed in early 2015.

As part of the building process, owners are required to put in “sweat equity,” time working on construction of their homes. Habitat requires homeowners to complete 400 hours of sweat equity before moving in. 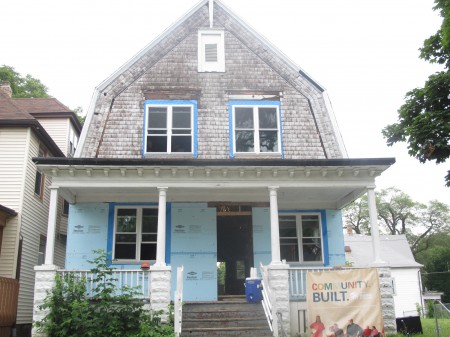 Lakeisha Jackson’s family will move into a new five-bedroom home in Washington Park in early 2015. (Photo by Patrick Leary)

Habitat recently began the second year of a three-to-five year Neighborhood Revitalization Initiative in Washington Park. Jackson’s home is flanked by a residence rehabbed by Habitat volunteers and an early-2000s home that the organization built from the ground up.

“Historically, Habitat has constructed a lot of properties in the Washington Park neighborhood,” said Michael Cockcroft, Habitat’s construction manager. He added that Habitat returned last year to the neighborhood to build upon the foundation it laid in the 1990s and early 2000s.

Both Jackson’s house and the other Lowe’s-funded home are larger than the typical Habitat home, according to Americorps volunteer Phillip Bradley. He said the Lowe’s donation allowed Habitat to work with larger families such as Jackson’s.

“We had potential partner families with a large [number] of children or they may have had a second-generation living with them. Our standard Habitat [homes] are only three and four bedrooms,” he said. “It just wouldn’t work for them.”

Bradley added that he hopes Habitat can improve the neighborhood through increased homeownership “It always helps a neighborhood to have more homeowners in it,” he said.

Bradley’s mother owned a Habitat house in Indianapolis when he was growing up. “I always thought it was good to give back to this organization because it gave me a home,” Bradley said. “I’m just helping give other people a home.”

Samuel Williams has lived next door to the Jackson property for more than five years and his sister has lived there for nearly three decades. He said he is pleased to see a new home on the block.

“Anytime they build something it’s an improvement,” he said. “But it boils back down to who’s going to occupy it.” He had not yet met the Jackson family.

The partnership between Lowe’s and Habitat for Humanity dates back to 2003. This year, Lowe’s donated more than $1 million to Habitat in 11 cities across the country. Lipski said that community service has played an important role during his seven years with the company.

“You have to be involved in the community,” he said. “You have to show folks that you want to help. Lowe’s culture aligns with my personal value system very well.”

And, according to Cockcroft, the homeowner’s joy makes the process worthwhile.

“Anytime we get a homeowner, they’re always very positive and excited, because this is the foundation for their life and their family,” he said.