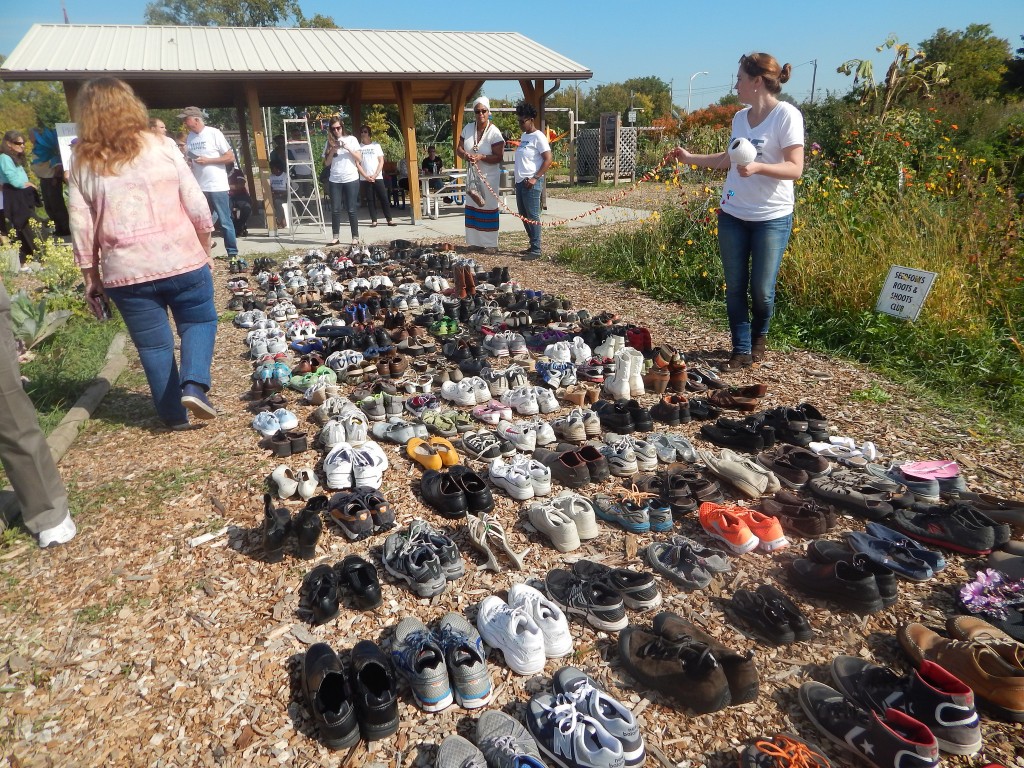 Hearts and Soles, a tour of five cities sponsored by Wisconsin’s Anti-Violence Effort (WAVE) displayed 467 pairs of shoes, representing the 467 victims of gun violence in the state last year. (Photo by Caroline Roers)

Nearly 500 pairs of shoes, representing the 467 people killed by guns last year, were displayed at Alice’s Garden last weekend, in an effort to call attention to gun violence.

Wisconsin’s Anti-Violence Effort (WAVE) sponsored Hearts and Soles, a tour of five cities, including Milwaukee. During the event, WAVE called for a law requiring criminal background checks on all gun sales.

In Wisconsin, federally licensed dealers are required to conduct a background check on all firearm sales, but private sellers are not. This means someone can sell a gun without conducting a background check or requiring identification from the buyer.

“It is harder to get a library card than get a gun,” said Dan Ullrich, a Milwaukee resident who attended the WAVE event. 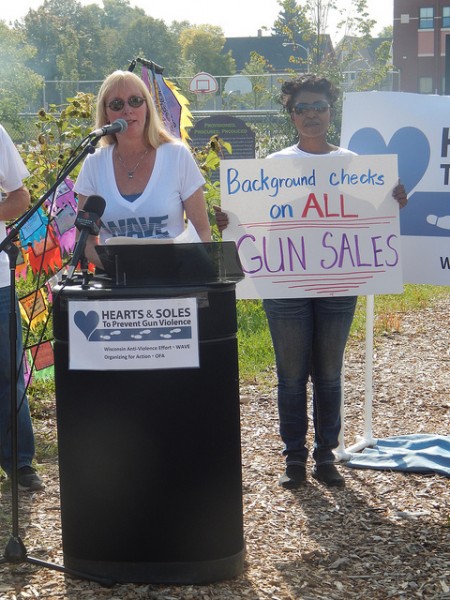 “One day my daughter, who was 5 at the time, came up to me and said ‘so many people are being killed with guns. Fix it mommy,’” Bonavia said. “That was eye opening for me and it really put (things) into perspective. As adults we need to take responsibility for this.”

State Rep. LaTonya Johnson, told the group how gun violence has affected her. She said she attended the funeral of Sierra Guyton, a 10-year-old who was killed on a playground in July.

“It was one of the hardest things I have had to do since being elected,” she said. “You don’t anticipate ever going to a child’s funeral that has been affected by gun violence. That is not something that is normal.”

Milwaukee has had more than 350 nonfatal shootings just this year, according to Johnson.

“This kind of violence in any city is not acceptable and it is rampant throughout the state,” she said.

“We need strong common-sense gun laws that are based on evidence and proven to work. We need laws that will keep guns out of the hands of high-risk individuals,” Bonavia added.

According to a survey done by Marquette University Law School in March of 2013, 81 percent of Wisconsinites support background checks for private gun sales and gun shows.

David Rose, a Milwaukee resident who attended the event, said that public opinion has started to change, with more people supporting background checks on all gun sales.

Rose said he was living in Shorewood the first time he was personally affected by gun violence. His children, then 12 and 14, had walked to Blockbuster and were a block and a half from home when someone approached them with a gun.

“They were held at gunpoint and he told them to lay on the ground,” he said.

The man got away with 59 cents.

Bonavia told the gathering, “This is a big issue, this is a tough issue and it is going to take all of us together to make a change.