You are here: Home / News / Arts and Recreation / Muralist paints the story of Silver City, with help from the community
Share this... 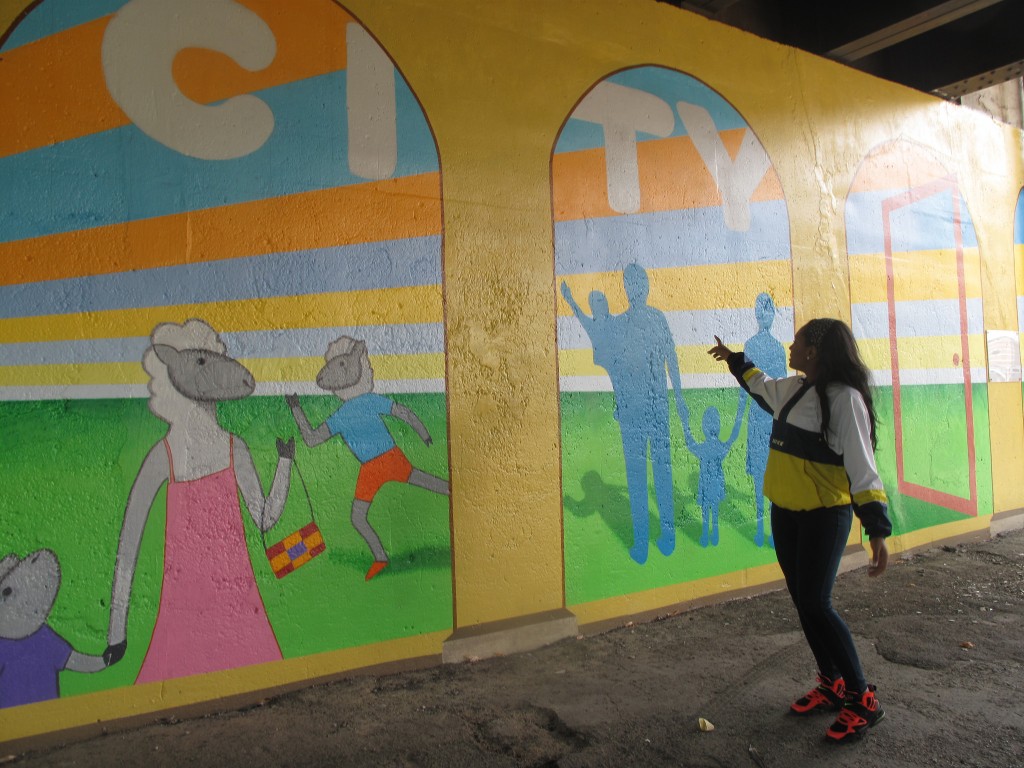 A Silver City Town House resident mirrors a figure on a new mural at 35th Street and National. (Photo by Teran Powell)

A sheep taking a selfie, a rainbow guitar, a faceless human in a reclining chair taking photos on a tablet, and a silhouette of a family against a yellow, red and orange sunset with “Silver City” printed across the blue sky are among the whimsical images on a new mural under the viaduct at 35th Street and National Avenue.

The mural was painted by artist Reynaldo Hernandez with the help of interns from ArtWorks for Milwaukee.

Daniel Adams, neighborhood plan coordinator for LBWN, helped coordinate the project. “My role with ArtsWorks was to determine what kind of project we wanted to do and where it would go,” Adams said. “Neighbors had identified that wall as a place where they’d like to see a public mural.” 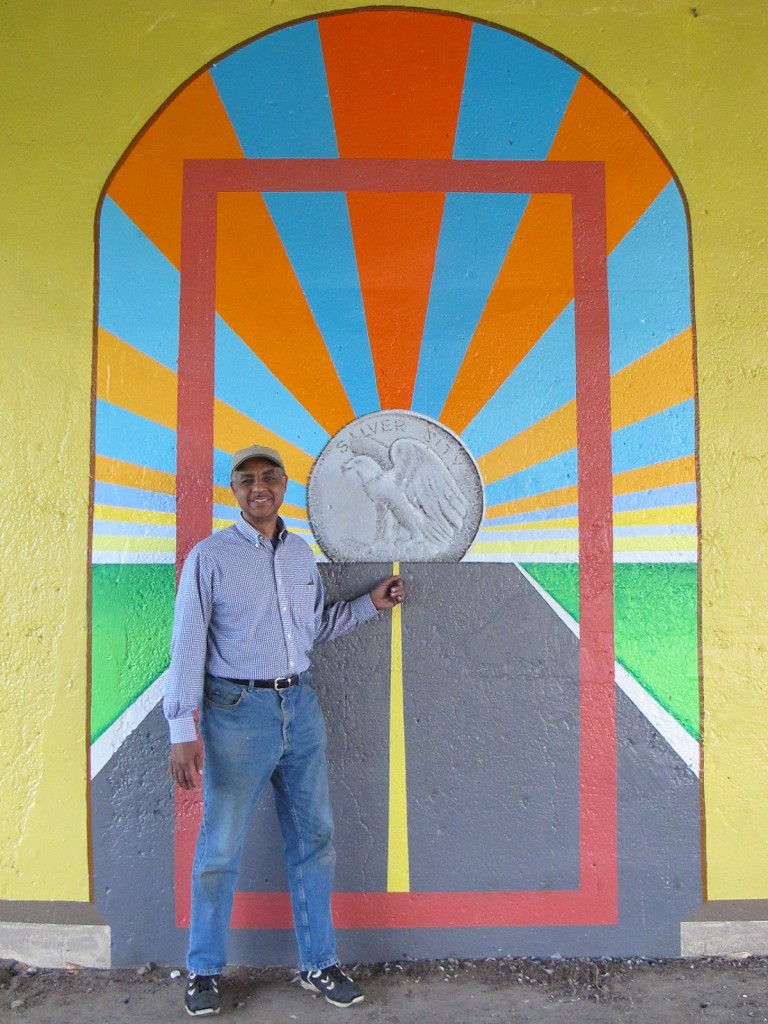 Before deciding who the lead artist would be, Terry Murphy, executive director of ArtWorks, her program coordinator and representatives from LBWN, including Adams, put a call out to artists and asked them a series of questions,” Murphy said.

“What LBWN liked about Reynaldo was that he is such a well-known muralist, but he had never done anything with them,” Murphy said. “They were excited to have him do a mural project in the neighborhood.”

Hernandez said he went into the project with a positive attitude, knowing he was going to be helping the community. He wanted the mural to be able to be seen from 35th Street and Pierce so it could draw people in, but he didn’t want it to look “too gaudy, too bright or like a circus.”

Hernandez said he thinks the mural adds beauty to the community and was glad to have neighbors’ input. The red doors on the left, middle and right of the mural, which were the idea of children from the neighborhood, represent the past, present and future. “It was a great challenge to think outside the box. I just went with it.”

Residents wanted aspects of the neighborhood to be represented, which explains the silver dollar and the sheep. “On the roof of one of the town houses on 35th Street, there is a group of fiberglass sheep eating grass,” Adams said. “Sheep have become a symbol for Silver City.”

He also noted that the silver coin in the middle of the mural “evokes the history of the neighborhood.” “The neighborhood is known as Silver City because people were paid in silver dollars back when they worked in the factories,” Adams said.

“From LBWN’s perspective,” Adams said, “our goal was for something unique and something to brighten the space under the bridge that would attract people.” The area has been overlooked and Adams hopes the mural “will get people to recognize the space as one where people can spend time.”

The mural is the second spearheaded by Layton Boulevard West Neighbors. The first was unveiled in the summer of 2013 along the Hank Aaron State Trail on the back of 3522 W. Pierce St.

Juan Matos, 17, enjoyed working with Hernandez on the Silver City project. “It turned out well,” Matos said. “My idea of the sheep people was in there so I was proud of that.” For Matos, the mural was unlike any artwork he had done because it was on such a big wall. “I hope I can make more murals like this,” he said.

Shanique Lowe, the daughter of a resident at Silver City Town Homes, was interested in the mural from the start. “More murals should be done around the city so people don’t spray paint the walls,” Lowe said. “This mural adds a little touch to the area and gives people something nice to look at.”