You are here: Home / Community Voices / Before you throw your hat in the ring: One voter shares a bit of insight
Share this... 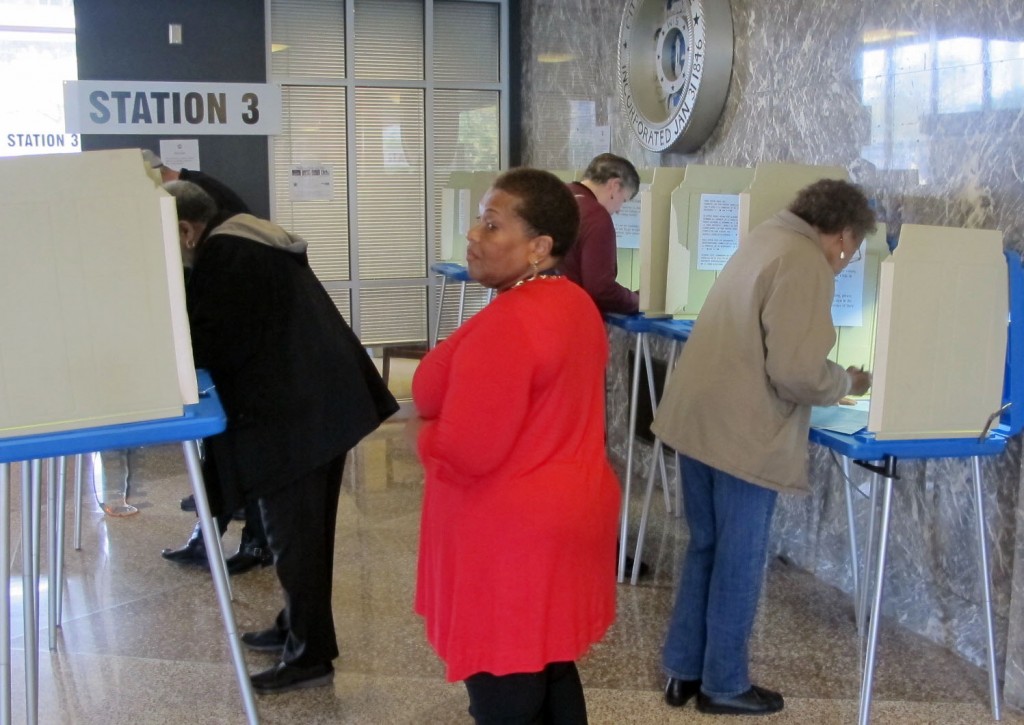 General Election 2014 voters took advantage of early voting at the Zeidler Municipal Building on the first day, Monday, Oct. 20. Early voting ends at 7 pm, Friday, Oct. 31. The polls will be open on election day, Tuesday, Nov. 4, from to 7 am to 8 pm. (Photo by Andrea Waxman)

In her 2008 acceptance speech as alderman for the City of Milwaukee’s 6th District, Milele Coggs closed by saying, “It is the responsibility of us all to give back to the community that helps to make us who we are.” These words are the type of rote commitment many elected officials utter as they look ahead to serving those who voted them into office. To the untrained ear, such pledges sound sincere and offer much hope. Time after time I have accepted these assurances, especially when my civic duty beckons from the ballot booth.

In campaign after campaign, candidates have led me to believe that my quality of life and wellbeing will be their priority. They implied that their personal fears and concerns are aligned with my own. When they discussed issues like the cost of education, the plight of the unemployed, the preservation of homesteads and how differently they will address these problems, I listened attentively. I held much trust in their dynamic leadership and fresh ideas. I felt their words were sincere and I was making the right choice. But sadly, like so many others, they neglected to follow through on those promises. I have been left feeling deceived, frustrated and angry.

At this writing, when a new crop of political candidates clamors for my attention, I find myself asking, “Why bother?”

Will those same invites that assured an open door policy again be slammed and shuttered in my face? Will the telephone calls I make be dumped into voice mail and no one remembers to call me back? I never seem to be able to time my calls just right, no matter how crucial the issue is. The razing of a deteriorated house that threatens to tumble from its moorings is only an issue to a parent whose child must pass by it each day. Requests for help understanding why applications are denied for programs that claim to improve the quality of life are only met with statistics and tired excuses about the current condition of our local economy. Reporting hazardous street maintenance problems should not warrant a finger wagging reprimand. That earlier slogan, “We’re in this together,” has now been watered down to a pitiful, “I have over forty-thousand individuals asking for my help.”

These cries for help should not be met with four more years of lies, deceit and disappointment. I caution voters to know who represents them and not be mislead. I challenge voters to do their homework.

Despite my weariness, I am reminded that I owe a debt to those who fought to ensure I have the right to vote. But my vote on Nov. 4th and in future elections will be highly subjective. I will take the next candidate, particularly the incumbent, to task for reneging on the platform they guaranteed to deliver.

I know that no one is gifted with the ability to see into the future, however, I would be impressed if their aspirations were within the realm of possibility. I agree that it often takes more than one term in office to make even the slightest difference. I can live with that. But I refuse to support anyone who has not shown prior proof that they can stand by their word. Do not plant seeds of false hope and then blame others for a poor harvest. I will be conducting my own vetting process and loudly sharing the results with people who have experienced a similar betrayal. I do not want anyone representing me that does not believe in the Golden Rule, does not understand the parable of the boy who cried wolf, or has forgotten the kindergarten lesson we learned early on about sharing in the sandbox.

No vote for you Mister or Madam Incumbent, if during your previous term you failed to spend any time sharing information that directly impacts the individuals and families in my community. Here is where you can learn how well we think you have represented us.

Lastly, I will not be duped into voting for candidates based solely on the fact that we share the same ethnicity. Gender, economic status, education and race should never be a filter that determines a vote. A qualified candidate must be, in my opinion, one who is willing to think outside the box, has a deep commitment and compassion for those they serve, and is keenly aware of the concerns and how to resolve them ethically. Above all, they must be respected for their sheer character. Did you notice I did not include they had to be liked?