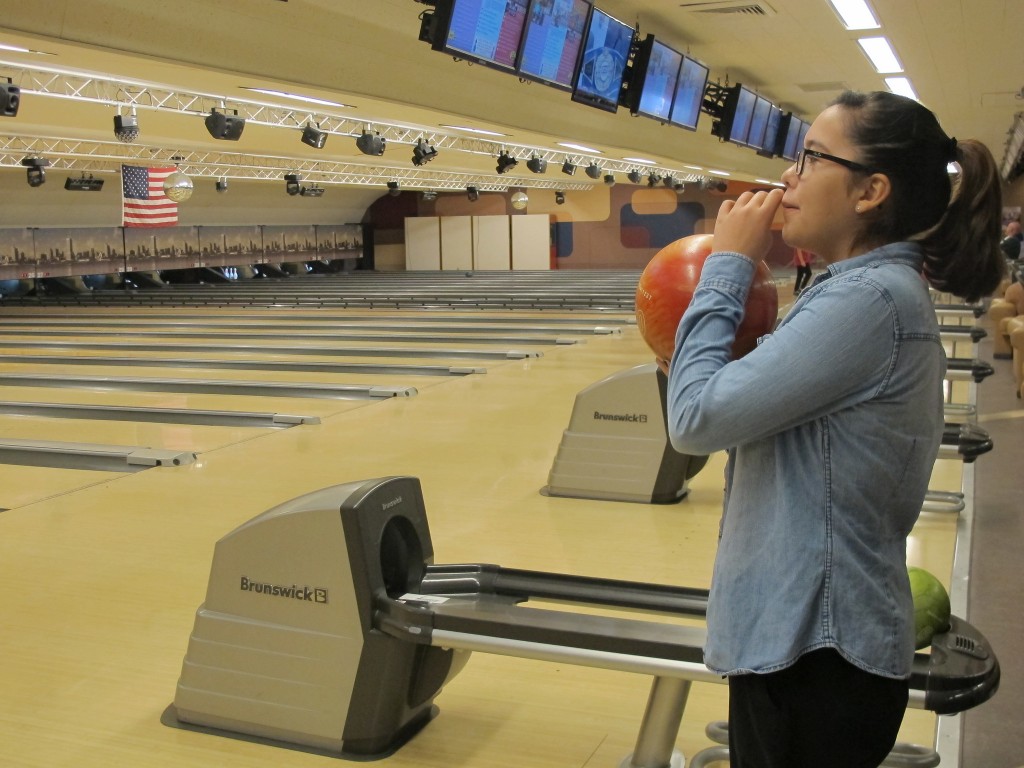 Ana Loppnow, 14, checks the score and gets set to bowl her first frame of the day against her brother and sister. (Photo by Teran Powell)

Brenda Loppnow’s family always wants to bowl, whether it is on a video game or at JB’s on 41.

“It’s definitely better than sitting in front of a TV,” Loppnow said.

The family has been bowling avidly this year. They bowled every day over the summer at JB’s on 41, 4040 S. 27th St. Loppnow’s children participated in the Kids Bowl Free program, which allows children to bowl two free games each summer.

“It was a very inexpensive and fun way to get them out of the house,” Loppnow said. 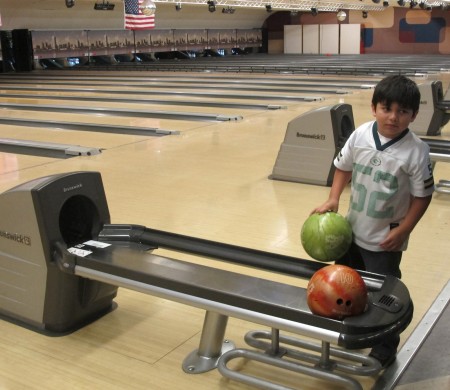 Diego Loppnow, 5, picks up his bowling ball at JB’s on 41. (Photo by Teran Powell)

Bowling has incited a rivalry between her children, Alexus and Ana, 14, and Diego, 5. Alexus bragged that her highest score was above 200, but “a lot of the times … the 5 year old takes out everybody else,” Loppnow noted.

Loppnow said she sees JB’s as a fixture in the community because of the programs they offer. The staff is very welcoming and this place has been here for a long time,” Loppnow said.

David Bordon has been the owner of JB’s on 41, formerly known as Olympic Lanes, since 2002. He sees JB’s as a way to give back to the community.

“From a community perspective, JB’s is based on family,” he said. “In my opinion the family unit is not as strong as it used to be because families don’t have or take the time to get together.” Bordon said JB’s serves as a means or venue for people to put down their cell phones and talk to one another, he added.

The center has more than 40 bowling lanes, an arcade for kids, and an on-site restaurant and bar.

Dave Kash, JB’s general manager, agreed that the bowling alley offers an experience for the family. “We try to provide an environment that is safe, friendly, fun and a way to get away from the stress of everyday life,” Kash said.

Sarah Del Real-Suarez has brought her children, Gabriell, 15, and Isabella, 12, to bowl at JB’s for the last seven years. “It was a way to get them involved with the community and into something positive” and it’s a fun weekend activity, she said. “I try to keep them in something outside of school to keep them on the right path … and they chose bowling,” Del Real-Suarez added.

Isabella said she and her brother are not too competitive with one another, but she will challenge him. Gabriell said he always gets the highest score when he plays against his sister.

Kash said, “Whether it’s bowling, having a good meal, playing games in the game room, or just coming in to watch sports at the bar, if we can provide a better experience than anybody else does … that’s what we do,”