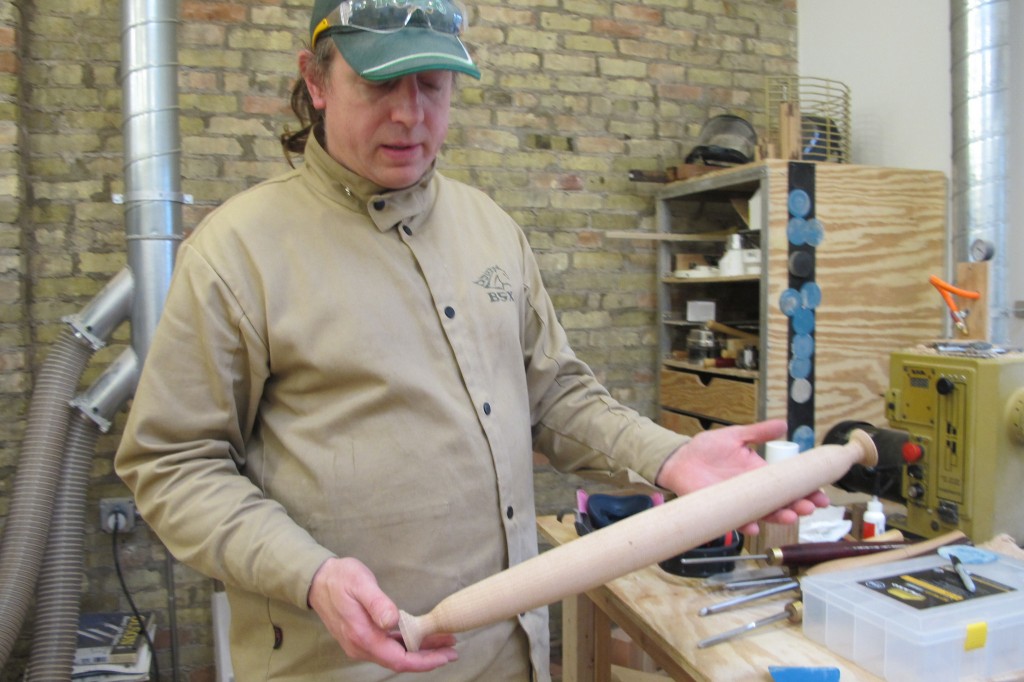 Felisha Wild displays an unfinished rolling pin near the turning machine in her workshop. (Photo by Raina J. Johnson)

In the three years since a small woodworking business started in a basement, the owners have won a local business plan competition, moved into a storefront and are now giving back to the community.

Felisha Wild and Janelle Phalen, owners of Our Daily Salt, are donating the proceeds from the sale of Wisconsin-shaped Christmas ornaments to the Hunger Task Force. “We wanted to keep it related to food and community food resources, so the idea to make Wisconsin-shaped ornaments was born,” Wild explained.

Our Daily Salt, which sells kitchen tools and housewares, won a competition sponsored by Layton Boulevard West Neighbors (LBWN) that allowed the owners to move into the store at 3519 W. National Ave. in July. Since then, they have seen tremendous growth. 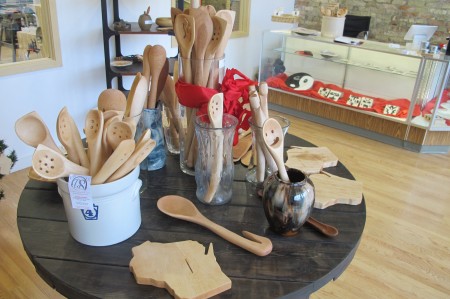 A display at Our Daily Salt features handcrafted wooden spoons, including the Happy Spoon, and a Wisconsin-shaped cutting board. (Photo by Raina J. Johnson)

In addition to their own products, Wild and Phalen sell work by other artists, ranging from tapestries and jewelry to bamboo plants. Their most popular item is the “Happy Spoon,” a wooden spoon with a smiling face on it.

Wild and Phalen originally planned to make 70 of the Wisconsin ornaments to sell for $5 each, but they decided to make an additional 50 since sales have been strong. They hope to present a check to the Hunger Task Force before Christmas.

“Hunger Task Force is delighted to benefit from the sale of the holiday ornaments,” said Sherrie Tussler, executive director. “Hunger is a pervasive problem in Milwaukee and while people take the time to celebrate this season, we are thankful to the people who also make the time to help feed local families.”

As the winner of the contest sponsored by LBWN, Our Daily Salt got a lease on the 2,000-square-foot building, $5,000 from the Zilber Family Foundation and technical assistance.

Wild and Phalen entered the competition because they thought the space on National Avenue would be a good fit. “We were just getting too big for the basement,” Wild said.

Natanael Martinez, economic development manager at LBWN, noted that just a few months since winning the competition, “Our Daily Salt has contributed significantly to the economic vitality and visibility of the Silver City neighborhood.”

Visitors to the store, which boasts Cream City brick on the interior, can look into the workshop space through glass doors.

“I wanted to … give the chance for people to look into the shop to see what we’re doing,” said Wild, who worked as a chef for 20 years before losing her job a few years ago. Our Daily Salt started as a food blog, where Wild would post recipes, reviews and tips.

Asked how she chose the name for the store, Wild recounted a story she heard about a king who asked his daughter how much she loved him. Her response was, “I love you as much as salt.” The king didn’t like her reply and banished his daughter from the village because he didn’t see the value in salt, Wild explained.

“I wanted people to see the value in salt. Something small, but they use it every day.”