Milagro Jones paints one of the long canvases laid out in a side room at the Martin Luther King branch as he talks about his plans to transfer from MATC to UWM. Jones, 25, wants to major in film and political science and aspires to direct films. Jones, who has been homeless on and off since he was born and currently lives at a local shelter, said he came to help paint a mural at a Martin Luther King Day celebration because “[it’s] something community-based.”

About 60 children, parents and other young adults participated in mural painting, one of the first activities scheduled for the Milwaukee Public Library’s day-long event to celebrate and remember the legacy of the civil rights leader on the national holiday that honors his life and achievements. Mayor Tom Barrett also stopped by to lend a hand in creating the piece of community art.

The event also included music, dance and theater performances commemorating King and the civil rights movement. Local writer Dasha Kelly presented a poetry reading. As a result of the national holiday, area schools were closed and city workers enjoyed the day off of work; all other MPL branches were closed, as well. 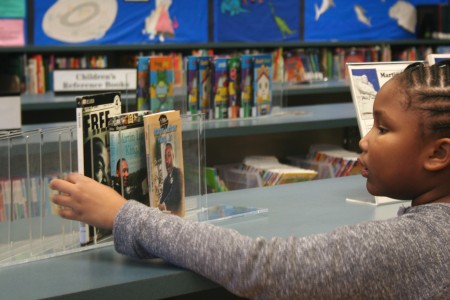 Milwaukee Public Library Director Paula Kiely said that because the branch is named after King, it’s fitting that it stays open for the holiday. She also noted that “libraries are such a great community place” and said she was glad that children, families and other members of the community had somewhere to go on their day off. Even those working the event, which has been going on for several years, were excited to participate, she said.

“We do have library staff working today and we ask for volunteers and we’ve never had any shortage of staff willing to step up,” Kiely said. “So, I think it goes to show just how committed the staff is to library service and to being part of what’s really become a special day for us.”

The mural will become a permanent fixture in the King Library’s children’s section. Visual artist Fatima Laster, who was asked to envision and create a concept for the mural, chose to focus on a message of peace, citing the pervasiveness of “unrest and discord and violence against children and amongst children.”

“I want them to take away [the knowledge] that, you know, the violence is not okay and it’s not normal,” Laster said of the children in attendance.

Glenda Johnson, a group leader with COA Youth & Family Centers’ Goldin Center, 2320 W. Burleigh St., said events like this are right in line with the experience the center is looking to provide to urban youth. “We try to keep them busy [in] the community to show them different things that go on besides being in the neighborhood that they’re in. We branch them out so they can meet [people] and do different things,” she said.

Johnson, who came with a group of children, said another group of elementary and high school students would screen “Selma” that night, and stressed the importance of cultural education opportunities as a way to inspire young people.

Dominique Carr, 24, attended with her daughter and godson. She said they came because the 2- and 5-year-olds “need to learn about Martin Luther King Jr. Day and what it stands for.”

Carr said, to her, the holiday signifies the idea that “the more people you impact to change, the faster change can happen,” which was echoed by Laster.

Laster, who grew up down the street from the King Library, said art has always been a way for her to escape from reality and express a hope for something better. “It’s a way to voice, visually, what you want to say to the world and to the community,” she said.

Jones, whose name means “miracle,” agreed with Laster about the importance of having a voice. “We’re all humans, we’re all the same creation, we’re all equal, we all need a voice cause if we’re going through something and can’t nobody hear us crying out, then, ain’t nobody gonna answer us and help us out.”