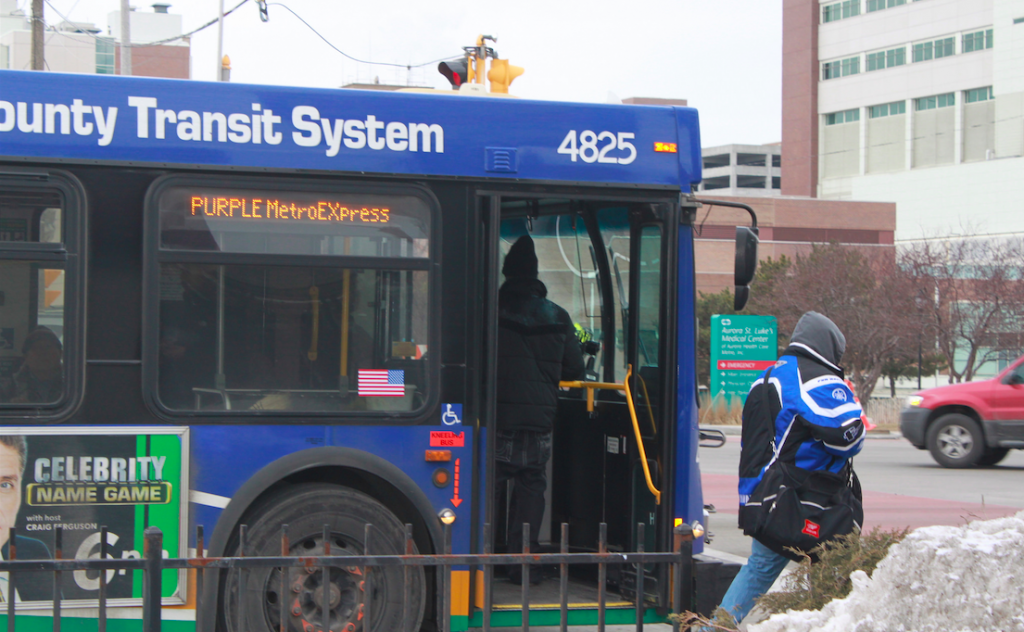 Like many central city residents, the Smith family doesn’t own a car. Yvett, 55, retired last year so her transportation needs are not as critical as those of her four sons, ages 34, 22, and 19-year-old twins. They depend on the bus to get them to work or job interviews every day.

“A lot of young people are looking for work and need the buses to get out to jobs,” said Smith, who lives in the Concordia neighborhood. Standing in a bus shelter at 27th Street and Wisconsin Avenue, Smith tugged her coat up against the winter wind and said that new bus lines that restore service dropped earlier will help residents. “I’m glad more of the service seems to be coming back now,” she said before boarding her westbound bus.

As the proposed city streetcar continues to be hotly debated, the Milwaukee County Transit System launched four new bus routes this month in addition to two others that were started in August 2014. Of the six new routes, three are designed to connect central city residents with potential employment opportunities outside the city. The other three routes are intended to help shorten travel times and relieve overcrowding on the buses.

Bus passengers traveling along 27th Street will now have a choice between express and local service. The new Purple Line Metro EXpress has bus stops spaced about a quarter-mile apart, compared to every one-eighth of a mile on the Route 27 local. The Purple Line has 126 fewer stops than the local, which means faster travel times for riders. 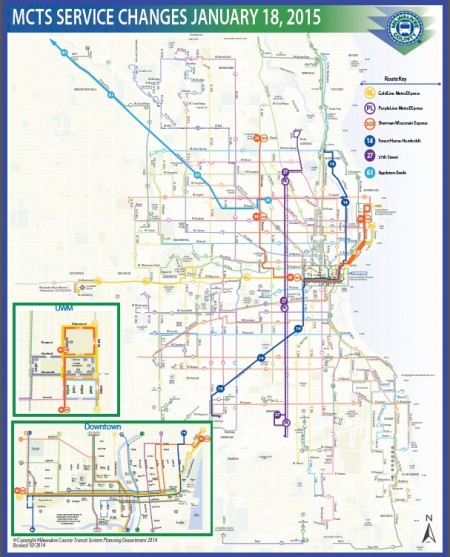 For example, passengers traveling to St. Luke’s Medical Center on 27th Street and Oklahoma Avenue who boards a Purple Line Metro EXpress at Hampton Avenue and Green Bay Road would arrive about 20 minutes faster than if they took a Route 27 bus, according to the Milwaukee County Transit System.

The new service provides relief for riders along one of the city’s most heavily trafficked routes. Buses along that corridor frequently operate at their seating capacity or are overloaded with passengers standing in the aisles, according to Jacqueline Zeledon, communications manager, Milwaukee County Transit System.

Another new route, the 30X Sherman-Wisconsin Express, adds express service to several of the busiest bus treks in the city. The existing Route 30 bus has the highest ridership in the system and is the main transfer line for other busy routes. It averages about 14,700 daily rides and approximately 8,600 riders on Saturdays and 5,500 on Sundays, according to the Milwaukee County Transit System.

The new 30X express bus follows a similar path as Route 30, running from UWM to Sherman Boulevard and Florist Avenue through the East Side and downtown.

Both the Purple Line Metro EXpress and 30X Sherman-Wisconsin Express routes were identified as needed improvements in the Five-Year Transit Development Plan that the Southeastern Wisconsin Regional Planning Commission announced in 2010.

The fourth new bus line, Route 61 Appleton-Keefe, is the latest route specifically designed to help connect workers from the central city with employment opportunities — in this case jobs northwest of the city. Beginning at 35th Street and Capitol Drive the bus runs northwest along Appleton Avenue to a Walmart store at W190 N9855 Appleton Ave. On weekdays the bus adds another two miles to its northbound route and connects with the Germantown Industrial Park. The timetable for that segment of the route coincides with shift changes, according to Zeledon.

Kerry Thomas, executive director of MetroGo, a group focused on improving transit around Milwaukee, said job opportunities are growing outside the city and the new bus lines are an efficient way of getting people to work. “It’s exactly where we need to be,” she said.

Route 61 is being funded through the Zoo Interchange lawsuit that was settled in May 2014. The lawsuit alleged that the interchange project failed to adequately address the needs of city residents who rely on public transportation. As a result of the suit, state and federal transportation authorities agreed to spend $13.5 million on bus routes linking city residents to employment opportunities north of the city. 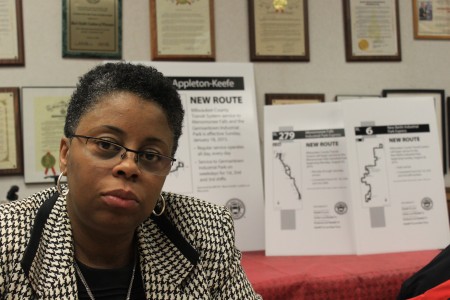 Clarene Mitchell, director of communication and collaboration for the Black Coalition of Wisconsin, said the group is satisfied with the new Route 61. (Photo by Matt Wisla)

“We are satisfied with the results of the suit and this latest bus route,” said Clarene Mitchell, director of communication and collaboration for the Black Health Coalition of Wisconsin, one of the groups that initiated the lawsuit. “We hope as much vigor will go into improving public transportation as interstate projects in the future.”

Route 61 joins two routes launched in August that link to employment centers and also resulted from the Zoo Interchange settlement. Route 279 connects to the Menomonee Falls Industrial Park and runs from Burleigh Street and Fond Du Lac Avenue north to 76th Street and northwest along Highway 145. And Route 6 links to the New Berlin Industrial Park after trekking along Capitol Drive, Mayfair Road and Moorland Road.

Commenting on the settlement and the new bus lines, Wisconsin Secretary of Transportation Mark Gottlieb said the routes “probably didn’t happen in an optimal way” but added that he’s pleased that one of the new lines launched in August “got off to a fairly successful start.”

Ridership on Route 6 is averaging about 368 people a day during the week, while Route 279 averages about 74 rides, according to the transit system. Mitchell pointed out that new routes can take a year or more before reaching sustainable ridership levels. The early acceptance of Route 6 may reflect local employers who had immediate hiring needs, such as FedEx.

According to Zeledon, transit system planners are reviewing existing bus lines and identifying new routes that will bring workers from the city to suburban job locations. New routes will be announced later this year, she said.

One of the most significant systemwide changes to affect bus riders in recent years occurred in September with the introduction of the M-CARD, which now represents about 70 percent of total fare sales, according to the transit system.

The card is free and can be picked up at more than 100 locations around the city. Later this year the transit authority will begin charging a nominal fee for the cards and cardholders will be able to go online and transfer money onto their cards for future rides, Zeledon said. Until then, cardholders must continue going to a service location to add money to their cards.