You are here: Home / Community Voices / A streetcar—more or less desired
Share this... 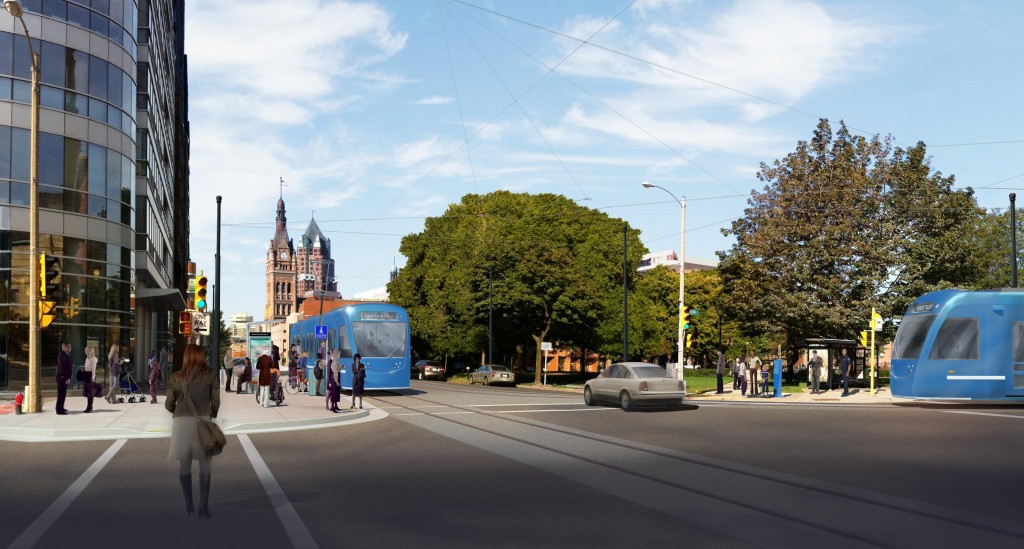 Rendering of the proposed Milwaukee Streetcar, downtown on Wells Street. (Photo courtesy of City of Milwaukee)

An old proverb states that silence is golden. You can be surprised with what you might learn by not saying a single word. Arriving first to any event certainly has its advantages and being the last to leave can also afford one a wealth of knowledge.

Over the past few weeks I received not one, but three email invitations regarding 15th District Alderman Russell Stamper’s town hall meeting on Jan. 20. Its purpose was to give Milwaukee citizens an opportunity to learn more about the downtown streetcar proposal, which may be placed on the April ballot as a binding referendum. This action would give Milwaukee voters a voice to say “yes” or “no” to the project. Despite me already making up my mind that the streetcar was a waste of taxpayer dollars, I decided to attend and see for myself why there was so much dissension. There had been so many opposing views on the topic, I was certain a fair number of folks would be in attendance and seating would be limited. I entered the Milwaukee Area Workforce Investment Board an hour early and sat a few rows from the front. At 6 p.m. many seats had been taken and a sizable crowd gathered to stand at the back of the auditorium.

Formalities completed, Alderman Stamper announced that although this forum was called specifically for his constituents, he would allow questions and comments from the rest of us at the end of Mayor Tom Barrett’s presentation. The overhead projector gave us a glimpse of the artist’s renderings, route maps and other pertinent statistics. As Barrett shared the back story of why this was such an important new addition to the downtown and lake front commerce, the room fell silent. For 25 minutes we heard all the pros about new construction jobs, better transit accessibility, and shiny high-rise apartments that would deter college graduates from migrating to sites beyond Milwaukee’s labor market. It sounded ideal and I soon began to shift my stance. 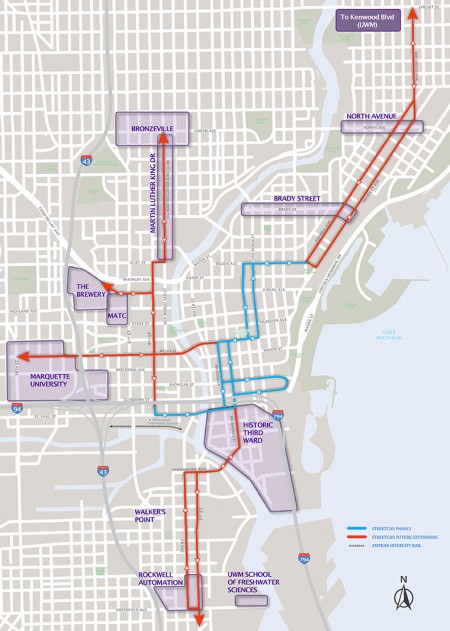 Map of the proposed initial downtown route and possible extensions. (Photo courtesy of City of Milwaukee)

During Barrett’s closing remarks many in the audience had already begun raising their hands to speak. We were once again reminded that those who live in the 15th District would go first. A litany of positive testimonials began the first round. I must have channeled my own thoughts directly to a woman in the back row who confessed she too was totally against the streetcar until Barrett so eloquently lulled her back to his side with his Power Point. The mayor reassured us that with all the work Northwestern Mutual Insurance and The Couture would generate; the $123 million streetcar project would be like a shot in the arm “for a community that is not economically depressed.” Then round two opinions were heard from those not residing in District 15.

More sinking potholes, homeless families, lack of employment opportunities, crime in economically oppressed communities were the usual reminders that turned the tide of what started out as an orderly walk through the park. It was evident that the quiet before the storm came from a small number of presumably coached individuals who Stamper identified by name each time they commended the proposal. The courtesy shown by those who lived elsewhere soon transformed into loud and accusatory ranting. Many complaints did not center on the $54 million kicked in by the federal government but more on the bond issue allowed by the Redevelopment Authority of the City of Milwaukee, which designated the build area a Tax Increment Financing District (TID).

Try as best as he could, the mayor, who chose to reinforce his argument by returning to the Power Point slides and using them as his defense, did not satisfactorily address the audience’s concerns. Another woman in the rear challenged Barrett’s use of a statement issued by Congresswoman Gwen Moore. The woman noted he paraphrased Moore’s words regarding the unlawful use of federal funds on non-transportation issues. Never once did Barrett use the word “restricted” in reference to the government dollars. He chose instead to repeat that if not used for the streetcar project, the funds would go the same route as the Talgo Light Rail money that Gov. Scott Walker refused. Not pleased with how those with opposing views were responding, Stamper decided to lighten the mood and acknowledge the presence of three City Council colleagues, a fatal mistake.

Alderman Joe Davis, District 2, is one of the project’s opponents and a lead in the referendum petition drive. Raising his hand, Davis asked Stamper more than once to be allowed to state his opposing view. Stamper instead thanked the audience for coming and ignored Davis. Many began to openly object to Stamper’s decision and chanted, “Let him speak.” The mayor meanwhile held fast his position behind the podium while local television cameras continued filming. Davis sat immediately behind me and never lost control of his temper until Stamper asked him to leave. Joining the crowd’s angry chanting, I said to Stamper, “I want to hear what he has to say”. His response to me: “Go outside and ask him.”

When you can actually hear the heartbeat of a man standing directly behind you who is so enraged and his insistence to be heard is not honored, a lot flashes through your mind. Even more so when you might be the only one in the room who hears him demand that the mayor explain why a portion of the funding for this project is being taken away from our public schools. You might wonder where I place my allegiance now. Did I mention that silence is golden?