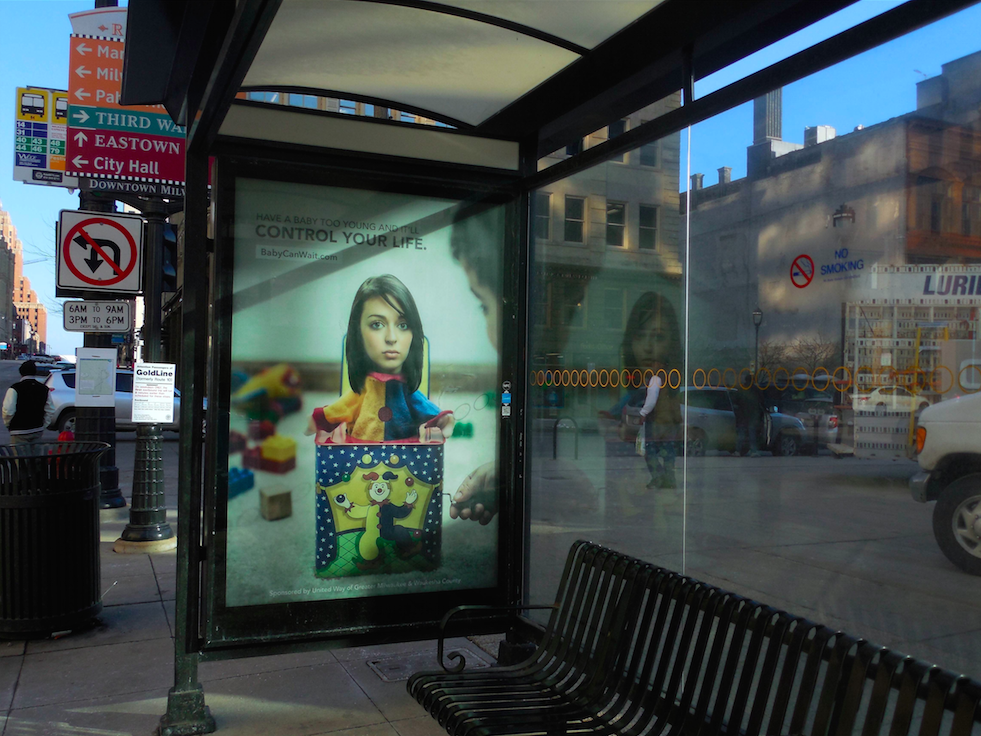 The new ads are located at bus shelters in targeted areas and read “Have a baby too young and it’ll control your life.” (Photo by Maria Corpus)

Marquise Ward, 15, a student at Lancaster School, remembers when he found out his then 14-year-old uncle was going to be a father.

When Ward saw a new ad that reads “Have a baby too young and it’ll control your life,” the message resonated with him.

The new public awareness campaign, sponsored by United Way of Greater Milwaukee & Waukesha County in partnership with Serve Marketing, shows teen parents as a hand puppet, a jack-in-the-box and a pull toy.

“The ad is basically telling [teens] a baby is not for you right now,” Euniqua Clements, 18, said after looking at the ads. “Wait until you finish and get everything you actually need, before you settle down and have a baby.” 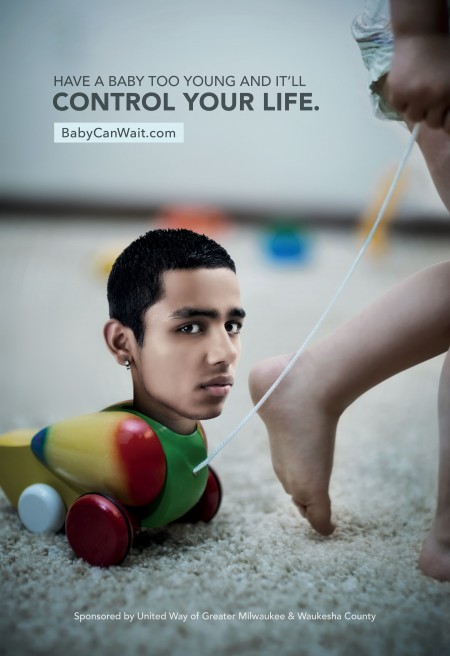 It’s the exact message United Way hopes teens take from the ads posted throughout the city’s bus shelters. The nonprofit heads the Milwaukee Teen Pregnancy Prevention Initiative, which aims to reduce the teen birth rate with help from leaders in academics, healthcare, faith and other organizations.

“Being a parent is hard in the best of circumstances,” said Nicole Angresano, United Way of Greater Milwaukee vice president. “What we want young people to hear is that being a parent is a gift. It’s awesome … but it’s so much more rewarding when you’re at a point in your life when you have more options, more choices.”

The campaign sends a different message to two university professors who head a project called Hear Our Stories, which works to change and reshape what people think about teen parenting.

Aline Gubrium, a Milwaukee native who is now associate professor of public health and a medical anthropologist at the University of Massachusetts, and her colleague Elizabeth Krause, a professor of anthropology, take exception to the ad campaign.

“We see calling out teen parents as bad examples to other teens, as [is done] in this campaign, as harmful and cruel,” Gubrium said. “Teen parents have important stories to share and rather than stigmatizing and silencing the voices of young parents, our project gives young mothers the opportunities to share their stories.”

Krause said she realizes the campaign is not intentionally cruel, but said its visuals bully teen parents. “Depicting a man as an animal is just bad taste,” said Krause, referring to the ad showing a teen parent as a pull toy. “It’s not a campaign that has dignity.”

“The intention really is to keep a very important conversation going and that conversation’s theme is ‘wait until you’re older to become a parent,’” she said.

Rysean Pettis, 14, a student at West Side Academy II, noted the young faces in the ads and said he can’t imagine being a parent.

Gary Mueller, founder and executive creative director of Serve Marketing, said the campaign’s provocative visuals are key to making teens such as Pettis turn their heads and think twice about having unprotected sex.

“One of the things we like to do is really embed lasting images about how difficult it is [to have a baby] and how much your life will be changed,” Mueller said.

The ads, however, also touch on the issue of sexual violence and statutory rape. United Way’s 2006 report, “If Truth Be Told,” revealed men over the age of 20 fathered 71 percent of babies born to teen girls in Wisconsin.

“This is not [always] a matter of two 16-year-olds getting hot and heavy on prom night,” Angresano said. “In many of these cases, adult men are preying on teenage and even younger girls.”

In 2013, the initiative surpassed its goal of reducing teen pregnancy by 46 percent. Since its inception in 2006, births to teens between the ages of 15 and 17 have been reduced by 56 percent.

The initiative’s success has become a national model, according to Mueller.

“We get calls from all over the country because we’ve created a model of how to attack a problem that’s really big and difficult to address,” Mueller said.

Currently in its ninth year, the initiative will continue to decrease the birth rate among teens in Milwaukee, according to Angresano.

“Instead of saying ‘we fixed the problem, let’s move on,’” Angresano said, “[let’s] set a new ridiculous goal, which is to cut the rate in half again by 2020.”