Eferin Burns Sr., played many sports as a kid thanks to his mother’s support so he thinks it is only right that his two sons, ages 10 and 11, have the same opportunities.

“They love soccer. It’s just that we’ve either never had the time for it or no one really ever presented the opportunity to me for them to play,” Burns said.

That’s why Burns recently brought them to the Northcott Neighborhood House, 2460 N. 6th St., to try out for the Milwaukee Simba SC Jimmy Banks Futsal League. They joined more than 20 other eager boys and girls at the tryouts.

Coach Demitrius White, a former professional soccer player, began his journey with the Simbas in the early 1990s. He grew up playing sports at the Northcott Neighborhood House and became interested in soccer at age 11. 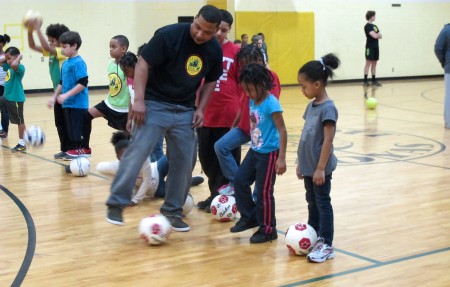 Coach Demitrius White instructs players on how to kick a soccer ball with the inside of their feet during a practice drill. (Photo by Teran Powell)

“I love trying different things and soccer was the one that hit for me,” White said. He trained with the Chicago Fire and played on the Puerto Rican national team. Soccer has enabled White to travel to places such as Brazil, France and Spain.

After his soccer career, White returned to Milwaukee to find that there were no soccer-related programs geared toward kids. He decided to revamp the Simbas and looked to his old Simba Lions teammates to give the idea a test run. He now uses his professional experience and knowledge of the sport to coach neighborhood kids.

Jendayi Mbalia, 28, was familiar with the Simbas, which led to her son, Jalil Jayden Rogers, 7, trying out for the team. “One of my oldest brothers and my youngest brother played on the original Simba Lions when they were growing up,” Mbalia said. “It was a no brainer to have my son try out.” Jalil has been playing soccer since the age of 3.

Soccer is Jalil’s favorite sport and he likes having the male influences in his life, his mother said. “I enjoyed making new friends at the tryouts and having a chance to play on a team,” added Jalil.

Rob “Biko” Baker, a Milwaukee-based activist and a former teammate of White’s, said soccer is different for players than sports such as basketball or football. “Whereas basketball is very ego driven, in soccer you can’t do that. It’s about camaraderie,” Baker said.

According to Baker, the ultimate goal is for the indoor league to run this year and going forward. “We want to get between two and five teams over the next year that play year round,” he said. 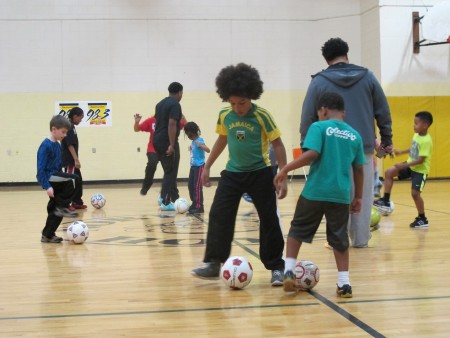 With the help of coaches, players practice shuffling soccer balls between their feet. (Photo by Teran Powell)

“We feel like if we get kids out here and get them playing that they will love it,” White added. “So why not do it?

“At the end of the day we want to get all kids playing,” White said.

The session was intended to teach the players how to handle a soccer ball and work as a team.

At the outset, the gym buzzed with the sounds of excited children as they sat on the bleachers anticipating what the day had in store for them. White blew his whistle several times to get their attention.

After each coach introduced himself, the kids were instructed to move to the basketball court to stretch before beginning practice drills. Each player had his own soccer ball.

Drills included showing players how to dribble the ball, kick the ball with the inside of the foot and shoot goals. Soccer balls flew in every direction.

Players later were able to put their new skills to work in team play. Each team of five or six wore shirts representing a different country, such as Argentina, Brazil and Ghana. Parents were just as excited as their children if a team scored a goal.

At the end of the session, the players were divided by age group into teams. The best of the players from the Jimmy Banks league will compete on the Simbas team.

“To play on the Simbas is the goal,” White said. The Jimmy Banks league will continue to help the novice players develop their skills.

Skill clinics will be held every Wednesday from 5 to 6:30 pm at Northcott. League play, in which the Jimmy Banks teams play against each other, begins Feb. 7. Games will be every Saturday for the next 10 weeks.

“I hope the kids can take away discipline from their experience,” Baker said.

“What we’re trying to get these kids to see is that you’ll always have somebody to lean on,” White said. “No matter what, the Simbas are a family.”