Latrice Jackson, 35, and her daughter Zareona, 14, were all smiles as they got up to leave the library at the Milwaukee High School of the Arts, 2300 W. Highland Ave., after completing their “Three Choice Enrollment” application for the coming school year. Three-Choice Enrollment is for families who are new to the district or who are selecting a new school for the fall.

“I’m really interested in Bay View High School and Carmen Schools of Science and Technology for Zareona,” Jackson said. “I think these schools may have a better curriculum than the school she’s at now.” Zareona is a student at Eighty-First Street School.

Zareona, who wants to be a video game designer when she gets older, liked looking into the different schools. “We don’t do a lot of stuff like activities at my school,” Zareona said. “I’m looking forward to what these schools can offer me.” 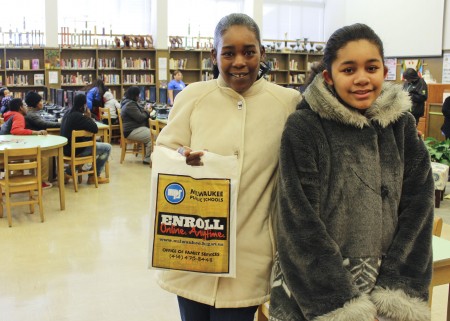 Latrice Jackson, 35, attended the school fair to find a high school for her daughter Zareona, 14. (Photo by Alhaji Camara)

Jackson and her daughter were just two of the hundreds of families who attended the Milwaukee Public School All-School Enrollment Fair. The event gave families the opportunity to meet and talk face-to-face with school representatives from about 100 elementary, middle and high schools and to enter their fall applications early. The district is taking Three-Choice Enrollment applications through Feb. 20.

Families filed through the hallways into the gymnasium and the cafeteria to gauge what each school has to offer their children. School representatives at wall-to-wall tables filled the rooms. Attendees crowded past one another through the narrow walkways as they moved from one presentation to the next.

After families gathered the information from each school, they dispersed to the library, teacher’s lunchroom or small classrooms to work on the application.

Olivia Soto, district supervisor for enrollment services, worked in the library along with several other employees helping families with their applications. “It’s like a one-stop shop,” Soto said. “We’re having all the schools come in for the parents to ask questions, get enrolled and prepare their children for the next year.” 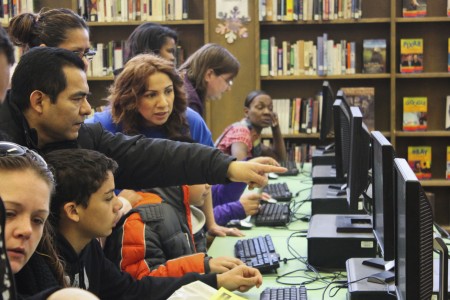 Parents and students explore their many options. (Photo by Alhaji Camara)

Cynthia Yarbrough, 25, a mom looking for a K4 class for her 3-year-old daughter, filled out the application. “I liked the IDEAL School and Cooper Elementary School the most,” Yarbrough said. “I want my daughter to have the opportunity to be more creative at any school she goes to.”

Stephanie Syno, 31, also was looking for a school for her 3-year-old daughter for the fall. She chose her school options by reviewing test scores and determining what programs other than academics the schools had to offer.

“We’re interested specifically in Milwaukee Spanish Immersion School,” said Syno, who added, “I like that everything is here in one place.” Syno said she appreciated having school resources readily available rather than having to call schools or do everything online.

According to Patricia Gill, executive director of the office of family and student services, this is the second year MPS has hosted the fair.

“We bring out staff and let them showcase their programs so parents are not just picking from a list,” Gill said. “You get to actually talk to people, see the programs and interact.”

Gill said there are already plans to offer the fair for a third year. “This fair gives parents the opportunity to make an informed choice,” she noted.