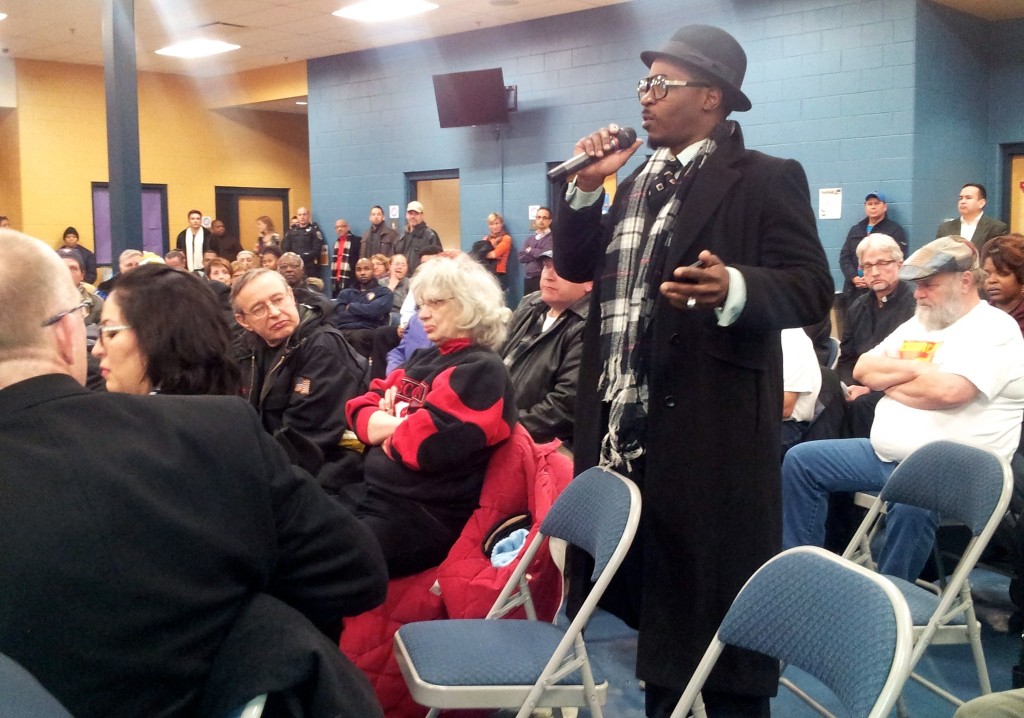 South Side resident Chris Woodley was among several in the crowd who questioned the benefits of the streetcar for central city residents. (Photo by Edgar Mendez)

After months of heated debate, the controversial streetcar plan, championed by Mayor Tom Barrett, and derided by other public officials, will finally come to a vote Tuesday in the Common Council.

Last week, at a public meeting at Journey House, 2110 W. Scott St., South Side residents joined the debate over the plan. While some expected the rift between Barrett and Alderman Bob Donovan, a mayoral candidate who represents the area, to dominate the meeting, instead sharp criticism of the streetcar plan from audience members in the packed Longfellow school cafeteria took center stage.

In an impassioned plea Cynthia Greenwood, who lives on the South Side and worries about a lack of jobs for city residents, argued that money being spent on the streetcar would be best used somewhere else.

“We have to invest in those who are hurting the most,” Greenwood said. From the back of the cafeteria came shouts of “when will the central city stop being ignored?” 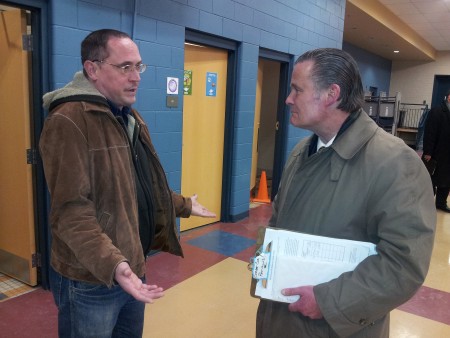 South Side Alderman Bob Donovan listens to Rich Neuber, a community member who is opposed to the streetcar plan. (Photo by Edgar Mendez)

Barrett explained the federal dollars allocated for the project cannot be diverted to other resources, a statement that Donovan refuted. Barrett added that while it is necessary to invest in all areas of the city, especially those with the most need, it’s also crucial to invest and built positive momentum in areas of the city that are doing well.

“The city has invested millions on the foreclosure crisis,” Barrett said. “We’re able to do that because we have a healthy tax base downtown.”

Jorge Franco, CEO of the Hispanic Chamber of Commerce of Wisconsin, agreed that the streetcar is a way to improve the quality of life in the city, adding that an influx of young professionals will positively impact the tax base.

According to reports, Barrett has secured enough votes to win approval for the $124 million streetcar, which would initially serve only downtown Milwaukee. Supporters envision that it eventually will be extended to UW-Milwaukee, Brady Street, Walker’s Point and Bronzeville, among other locations, but it is not expected to run through the central city. Full operation of the downtown routes would begin in mid-2018.

The capital construction costs of the streetcar would be paid for by a mix of federal and Tax Incremental District (TID) funding.

Donovan, who recently introduced an alternative transportation plan for the city, and Alderman Joe Davis have led a petition drive to secure the 31,000 signatures needed to force a referendum on the issue. As of late last week more than 17,000 signatures had been collected.

Donovan said that even if streetcar opponents aren’t able to gather enough signatures by Tuesday’s vote, state law permits 60 days to gather the needed signatures and they will continue their drive.

Rich Neuber, who also called for a referendum, works for an organization on the South Side that provides meals to the homeless. He described the plan as another example of the “haves” having more.

“We barely have enough resources to serve 120 homeless people, but you’re more interested in a streetcar that only serves a small part of the city,” he said.