You are here: Home / Home / Carousel / “We Got This” campaign seeks to change perceptions of young black men
Share this... 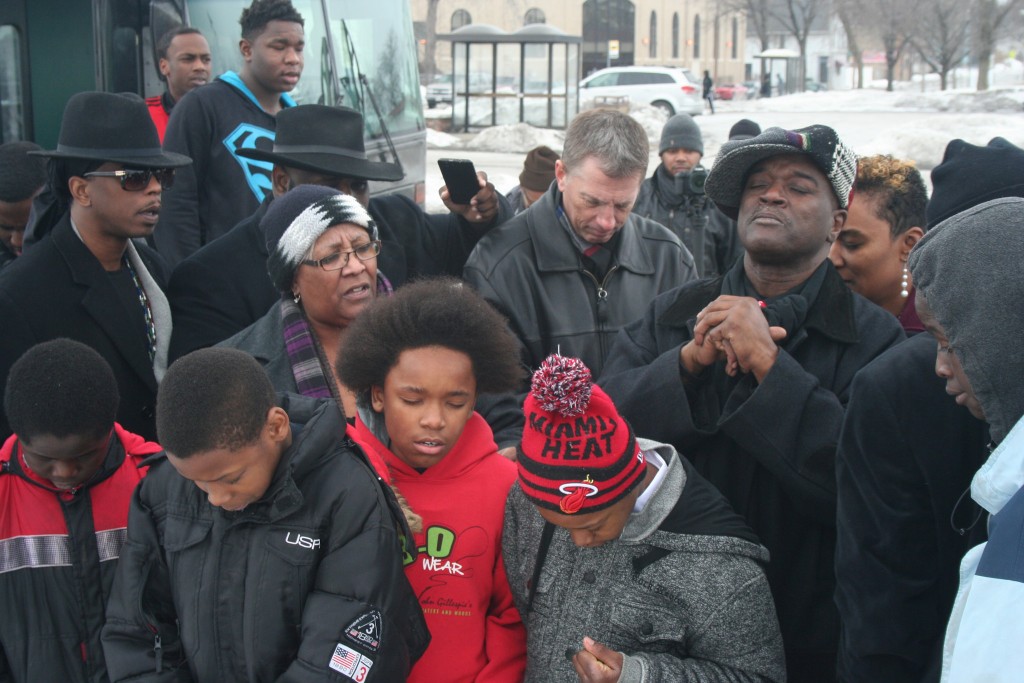 Andre Lee Ellis and others pause for a moment of prayer before the unveiling of a new billboard celebrating young black men. (Photo by Jabril Faraj)

A group of youth, parents and public officials gathered recently at the corner of 12th and Walnut streets to unveil a billboard for the “We Got This” campaign, a grassroots effort started by Andre Lee Ellis in 2014 to “employ and empower young black males.”

The billboard, which features photos of the young men and a reference to a recent event where the boys and their mentors spent a night “on the town,” will stay at that location for about a month before moving to the intersection of Martin Luther King Jr. Drive and Keefe Avenue in April.

Ellis was clear about the event’s intention. “It’s celebratory of little black boys who live in the zip code of 53206 and were told that they were the worst of the bunch. Within one year — not even a whole year — they went from jeans to tuxedos, they went from walking the streets to, now, being posted in the air and letting you know that they’re no longer just boys in the hood — they’re gentlemen,” he said. 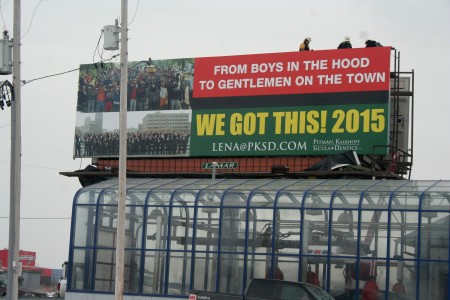 About 60 people were present at the unveiling, including Wisconsin Sen. Lena Taylor and State Rep. David Bowen. Participants attended a luncheon at Coffee Makes You Black immediately following the event.

Rashaad Washington was there with two of his three boys. He said he’s been supporting the campaign from the beginning because it’s creating a “new direction” for African-American youth and allowing them to see change being made. “It means that it’s a better future for my young black boys — that’s what it means to me,” Washington said.

Adebisi Agoro II was also there with his 11-year-old son. He spoke about how important it is for kids to have people within their community to look up to. “It means the world — it’s the difference between succeeding and not succeeding,” he said.

“I didn’t have a father figure so I made a lot of decisions on my own,” Agoro said. “We’re in a real crazy time in our city … we can’t leave these kids alone.”

Ellis echoed that idea, saying that many of these young men don’t have their fathers around on a regular basis. “We have to step in and help become community parents, where it’s needed,” he said. “It means a lot for the kids to have a male role model to look up to.”

Samuel Johnson, 14, participated in the work program with Ellis last year. The young men were each paid for working on various projects in their neighborhood every Saturday morning. Johnson, who wants to be a chef, only missed two weeks throughout the entire summer and said he learned about gardening, being mindful and taking responsibility for his actions.

“I thought it was an amazing thing to do for our community … it did look better and it was a better place to be.”

He was excited about having his image displayed. “I’m on a billboard, for the first time,” he said.

But, more importantly, Johnson was grateful to be at the event “with a lot of people who care about me.” He’s been able to build relationships with his mentor, Arnold Cifax, as well as Ellis, Taylor and Bowen.

“They are all here for me … they’re not here just for the money,” he said. “They’re all here to help me out and make me stronger, make me grow as a man.”

Johnson said he knows they really care because of the way they act toward him. “They don’t turn their back when we need to talk to them,” he said. “They actually listen to what we have to say.”

The summer work program will continue in the same way as before but Ellis said the cleanup efforts would cover a larger area. “We’re putting the ‘neighbor’ back in the ‘hood,’” he said.

In the end, Johnson summed it up, saying, “I can be anywhere else doing anything else but I’m here doing something positive.”