You are here: Home / Home / Carousel / ‘MKE Mobile’ provides residents new way to report those potholes to the city
Share this... 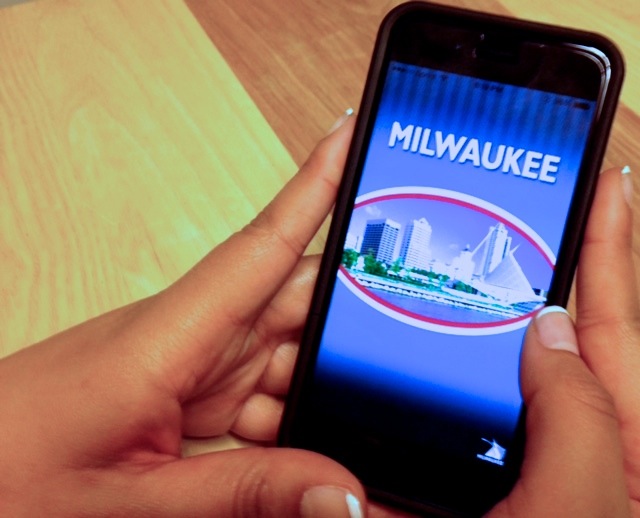 The free app is a fast way for residents to report issues to the city, officials say. (Photo by Maria Corpus)

Caitlin Evans, a resident of Greendale, is among the many city visitors who has noticed dangerous potholes and graffiti around the city’s streets and buildings.”

“I feel like the city might not know what’s going on, and sometimes I wish there was a way I could tell them that a street needs attention,” said Evans, who was shopping downtown.

Evans was not aware that there’s an app to report the problems she and others notice around town.

MKE Mobile is a free cellphone app that allows residents to locate, photograph and provide information on issues such as potholes, graffiti and abandoned vehicles. The app was developed by the city’s Information and Technology Management Division (ITMD).

Nancy Olson, chief information officer for the city, said the app is a good way for residents to interact with local government.

“It’s another tool that people can use on their own time to report problems in the city,” Olson said. “[Residents] don’t have to wait to call during the times the city’s call center is open, and they don’t need to wait until they get to a computer.” 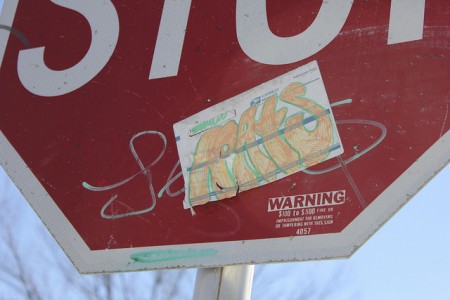 City residents can use a mobile app to report graffiti and other issues. (Photo by Alhaji Camara)

Individuals have the option to file service requests anonymously and to check the status of their report via the app.

Nicole Murphy, 38, lives in Riverwest and noted the app is a better alternative to calling the city on the phone.

“The app is helpful because if you call, people get put on hold and get discouraged,” Murphy said.

Despite its convenience, so far only 386 service requests have come to the city via the mobile app, which is a low number compared to the thousands of phone calls the city receives on a daily basis, according to Olson.

Street lighting is the biggest concern residents have reported via the app, with 73 filed complaints. Potholes are a close second, with 69 complaints filed via MKE Mobile.

Minimal downloads and little advertising are reasons for the low numbers. Since Mayor Tom Barrett first introduced the service app in September, about 3,000 residents have acquired it, according to Olson.

James Austin, 37, called the city on one occasion about a pothole and said he didn’t know about the app. He said the app is a good move on the part of the city to improve residents’ commute and neighborhoods.

“North 27th Street has been a really big problem for me with potholes,” Austin said. “As long as [the city] monitors the app, I think it’s a good service to have.”

Although the app makes it easier for residents to file a request, it doesn’t improve the city’s response time for fixing the issue.

“Whether you call in, you get on the city’s website or you use the app, it’s the same process,” Olson said, “[The city] evaluates the request type and then it gets sent to the appropriate department electronically. It happens just as fast if you call it in, or you [file with] the app.”

Nevertheless, Olson encourages Milwaukee residents to download and use the app.

“It’s another mechanism that people can use to share information with the city so we can take care of things,” she said.