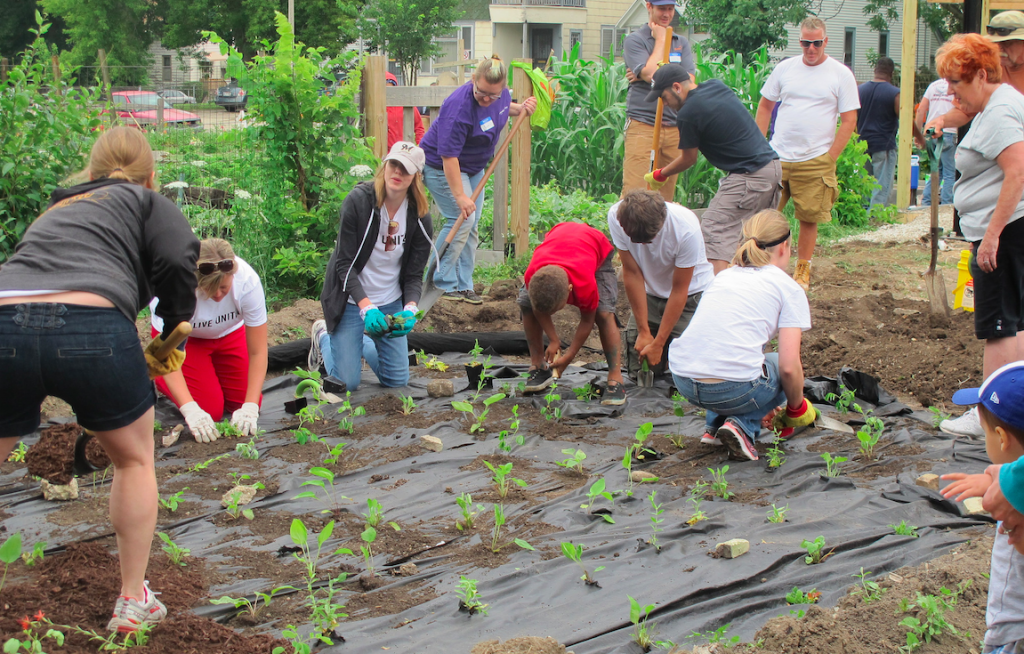 Editor’s note: This article, which updates a piece originally published on July 28, 2014, is one of a series profiling the finalists for Milwaukee Awards for Neighborhood Development Innovation (MANDIs). Guest House of Milwaukee’s Cream City Gardens and Rain Harvesting project is a finalist for the PNC Bank Trail Blazer Award, which recognizes an innovative approach to a community problem.

The Brewers Community Foundation and long-time Milwaukee Brewers second baseman Rickie Weeks funded construction of a rainwater pavilion in the Cream City Gardens to make it easier for Guest House of Milwaukee residents to grow food and learn marketable skills.

The gardens are across the street from Guest House, a residence for more than 80 formerly homeless male tenants at 1216 N. 13th St. About 100 volunteers gathered to prepare the gardens for the pavilion’s grand opening. 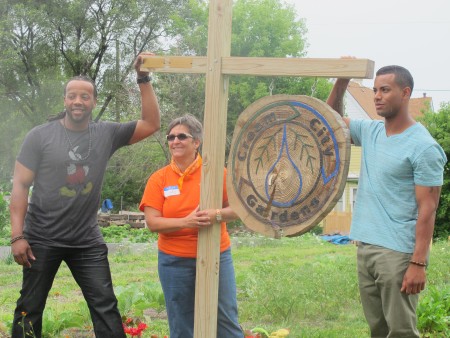 “It’s awesome that the community is rallying around this green effort with the specific goal of providing skills and food for people who have experienced homelessness,” said Erik Koepnick, manager of volunteer services at Guest House.

The idea for the pavilion started in spring 2014, when Cecelia Gore, executive director of the Brewers Community Foundation, sat down with Weeks, a 2011 All-Star who debuted with the team in 2003, to discuss what organizations he wanted to support.

“Rickie is pretty decisive,” Gore said. “He thought this was a good project and was willing to fund it.”

When Gore proposed the donation, Guest House put a rainwater pavilion at the top of the list.

“For the last three years, we’ve been running hoses from across the street and they get run over by cars,” said Guy Tymorek, the Guest House staff member in charge of the gardens. “The rainwater collection shed is going to be incredibly helpful in maintenance of the garden.”

“It has a dual-function as a gathering space for the Guest House and the community, as well as its ability to capture rainwater,“ Vetter said.

Guest House uses the Cream City Gardens in multiple ways. It grows about 2,000 pounds of produce each year to feed residents, formerly homeless men, and donates the rest to nearby Friedens Pantry.

Guest House also provides a six-week urban gardening program to help get residents back on their feet.

“The hope is that they will be able to get jobs in landscaping, at a garden center, anything that has to do with agriculture,” Tymorek said.

Daniel Ruh, a recovering alcoholic who became homeless for the first time in 2013, thrived as a result of the gardening program.

“It brings inner peace,” he said. “I was an alcoholic for a very long time. … This is part of my therapy.”

Guest House executive director Cindy Krahenbuhl said she is thankful for the Brewers’ donation but stressed that the partnership goes beyond money.

“Having a strong partner like the Brewers and the Brewers Community Foundation helps bring recognition to the quality programs we have here and the fact that we’ve been around for over 30 years,” Krahenbuhl said.