You are here: Home / News / Arts and Recreation / Vulnerable youths find paths to self-expression at EXYOMKE
Share this... 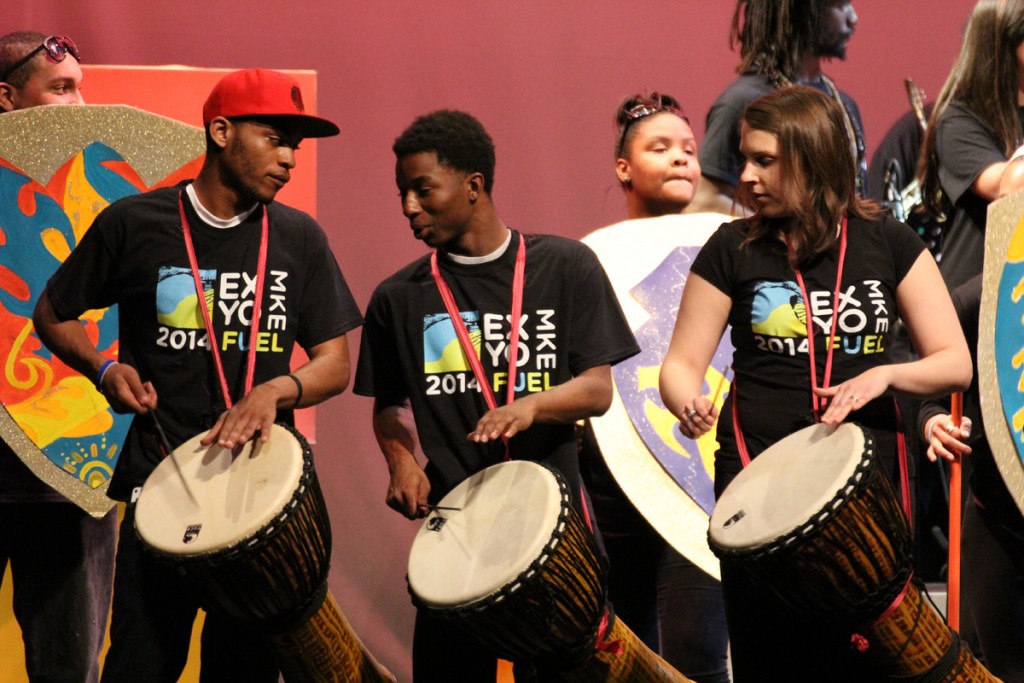 Editor’s note: This article is one of an occasional series profiling the finalists for Milwaukee Awards for Neighborhood Development Innovation (MANDIs). Express Yourself Milwaukee is a finalist for the BMO Harris Bank Cornerstone Award, which recognizes an organization for its commitment and effectiveness over time.

When Express Yourself Milwaukee visual artist Ammar Nsoroma worked on the design of a mural with participants from the Milwaukee County Accountability Program, it was a challenge to get young people who have entered the criminal justice system to engage with ideas they don’t typically think about.

“He had to really grapple with the kids about who do you look up to in your life, who helps you know the best of who you are,” said Lori Vance, founder and co-director of Express Yourself Milwaukee.

The mural, which portrays civil rights figures, was displayed at the county courthouse, which, Vance said, lent added meaning to the work by showing that “these kids are not just case numbers that the system has to deal with. These are human beings who have something to contribute.”

Express Yourself Milwaukee (known as EXYOMKE) teaches the basics of different art forms to young people ages 7-21 who are struggling. The staff works with groups of students in schools, after-school programs, correctional facilities, shelter care homes and residential treatment centers. Some staff members are trained therapists; others are professional artists. 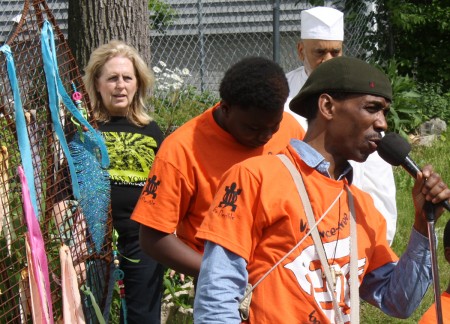 Those different approaches harmonize into art therapy designed to reach young people for whom conventional schooling has not worked. Some are in alternative schools; others are in juvenile-justice diversion programs; still others are behind bars. According to Vance, the program’s value stems from the belief that “art gives us a venue to talk about things that are hard to talk about.”

Expressing true feelings is at the heart of EXYOMKE’s mission, and art therapy in general. “Art therapy uses art media, the creative process, and the resulting artwork to explore [clients’] feelings, reconcile emotional conflicts, foster self-awareness, manage behavior and addictions … and increase self-esteem,” according to the American Art Therapy Association.

Vance, a licensed clinical social worker who maintains a private practice, said she embraced the idea of reaching troubled youths through art after Sept. 11, 2001. Americans felt under siege from abroad, but she reflected on the poverty and violence that beset city neighborhoods and thought, “We have war zones here. What can I do about this?”

The Milwaukee organization is an affiliate of Massachusetts-based Express Yourself, now in operation for more than 25 years. EXYOMKE was incorporated in 2003, and has served more than 5,000 young people—95 percent of whom are low-income, and 80 percent of whom have experienced delinquency or been in the justice system.

EXYOMKE has twice been named a finalist for the National Arts and Humanities Youth Program Awards, and its outdoor art installations received a Mayor’s Design Award from the city in 2013. In 2009, the program was named one of eight “unsung Milwaukee urban heroes” that make a difference in the lives of children by the Marquette Law School Restorative Justice Initiative.

Each year, the program adopts a theme and explores it with groups of young people in more than a dozen partner sites. During the fall semester, participants try out various modes of artistic expression, including visual arts, dance, music, poetry and theater, working in teams under the guidance of staff that include working professional artists.

As participants progress, they build toward a culminating performance of their various works in the spring semester. This year’s theme, “Step Up. It’s Bigger Than We,” takes the stage May 7 at Alverno College.

Vance said the theme prompts participants to ask, “What am I here to do on this planet and how do I step up into expressing my gifts? What do I have to offer to the community, my family and my friends?” Staff members work to draw out the sometimes-reluctant young people, cajoling them to try new things and learn new skills, in an environment that promotes cooperation and teamwork.

For some, the emphasis on self-expression and collaboration is difficult. But Vance said, “People want to be connected to each other, and want to feel a sense of belonging. Even the most challenged kids in our community want to feel good about themselves, at least, and their families. If you take the time to pay attention, then people open up and want to share.”

Chuck Chappell first encountered EXYOMKE when he was a student at Project STAY High School, an alternative school for students at risk of dropping out. He began by participating in extra-credit projects, and then became an intern, before joining the staff as an artist/arts assistant. He’s now finishing up at Milwaukee Area Technical College and plans to leave the city for a four-year college next year.

The program had a lasting effect on him, Chappell said. “I was kind of antisocial. It opened me up to people in general.” 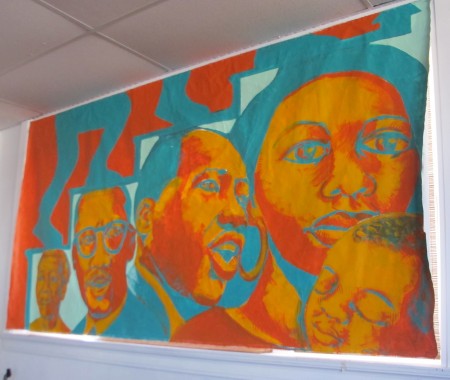 EXYOMKE also broadened his horizons beyond his endeavors as a spoken-word artist. “I never worked with people from different ethnic groups,” he said. “I never had collaborations with different styles of artists. It was most definitely something new to me.”

It’s not uncommon for participants to be shy at the start, said Co-director Daisy Bouman, who came to EXYOMKE 10 years ago as a college volunteer. “Some kids come out of their shell,” she said. “But others may have to ‘reel it in’ — those who come in with more dynamic behavioral issues.”

For some, the program offers a safe haven. Bouman said one young participant told the staff that she “just didn’t really feel happy in other places in her life, and when she came here she felt like this is one of the few places where she could be herself and smile and have fun.”

Vance pointed to some recent emails from participants who reside at Lincoln Hills, a juvenile facility in rural Irma, Wisconsin, that includes the Lincoln Hills School for Boys and the Copper Lake School for Girls. Both are operated by the Wisconsin Department of Corrections.

“I liked drumming because it was fun and we came together and everyone had talents in their own way,” wrote one. “It felt free. It felt like we were at home. I felt the spirit of the music.”

“My favorite part was the whole thing,” wrote another. “I participated in writing. My thoughts were all over the place. I’m a good writer and all, but I don’t like showing people the things I write. I was shy to read it to everybody.”

One other wrote, “When I get home I’m going to join Express Yourself so I can stay out of trouble.”

Vance believes both participants and artists benefit from their collaboration. The students gain a fresh perspective (“Artists tend to look at the world differently,” she noted), while the artists are energized by working with young people they might not otherwise interact with. “They feel more inspired in their own work,” she said.

Working with a population that tends to feel isolated, Vance hopes that EXYOMKE can nurture the opposite. “I hope they leave with a deeper connection with themselves and their strengths, the positive stuff that they have inside,” she said.

“What Express Yourself has offered is this place of feeling connected and feeling a sense of belonging for the people that we touch, even if it’s just for a moment.”

About Jim McGowan and Teran Powell