You are here: Home / Home / Carousel / Community raises funds for Bradley Tech international trip after donor backs out
Share this... 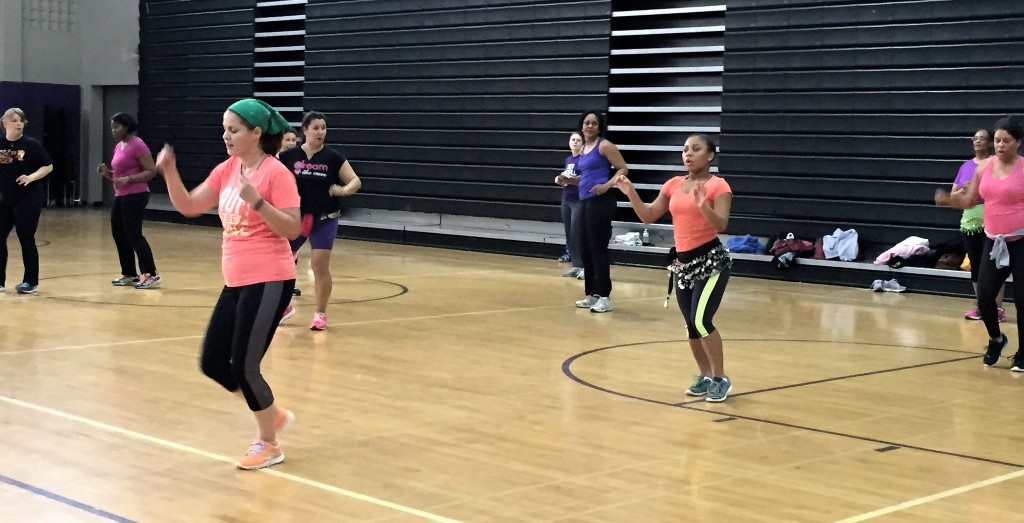 Community members are coming together to help students at Bradley Technology and Trade School embark on what could be the trip of a lifetime, raising more than $12,000 in the last five weeks.

Julie Landry, a Bradley Tech alumna, is among the local residents who have shown support. She led a Zumba party, which brought 15 participants and raised $130.

“This is a once-in-a-lifetime opportunity and anyone that can help, should help,” Landry said.

The fundraising efforts come after a donation from an anonymous donor fell through. The donor had promised $1,400 to each member of the Bradley Tech Globetrotters, a group of 12 students traveling to Ireland, Wales, England and France in April, to help defray the trip’s cost of $3,200 per student.

Julie Landry leads a workout with a variety of dance moves. (Photo by Maria Corpus)

The students had been raising funds throughout the school year, through events such as a haunted house and a candy sale. They also were expected to pay some of the costs themselves. But without the donor’s contribution, they fell way short.

The news devastated Fincher, whose previous travel experiences inspired her to organize the international trip.

“I saw really good kids who were really struggling, and I wanted to give them an opportunity to see and experience more things and see how big the world is,” Fincher said.

Springing into action, Fincher created a Go Fund Me account to help cover the cost of the trip. The initial goal was to raise $20,000 in 20 days. The goal was later adjusted to $16,000 after five students dropped out for various reasons. The Go Fund Me campaign has raised $12,505 so far, enough to cover the remaining balance for the seven students who will go abroad.

Senior Xavier Ashford, 17, is one of the students who will be going on the trip. He said Fincher encouraged him to have faith and not give up when the donor fell through.

“She kept saying, ‘just keep praying, have faith. It’s meant for us to go, so we’re going to go,’” Ashford said. “She really made us believe it, and I really believed it.”

He is excited to visit Dublin and Trinity College, locations he has been researching in the last few months. Ashford added he is thankful for the community’s support.

“Our school may be what it is, but it feels good to know that there are people out there who still care,” he said.

Diamond Hutton, 15, is a sophomore at Bradley Tech and will also be going on the trip. She danced alongside her mom, Jasmine Jenkins, 34, at the Zumba fundraiser. Europe has always been a dream for Jenkins, and she is grateful her daughter has the chance to go.

“I think it’s very important that the kids get opportunities like this to see what’s going on outside of their bubble,” Jenkins said.

Ashford, Hutton and the rest of the globetrotters will make presentations on a certain location and landmark as well as complete a number of writing assignments to fulfill the educational objectives of the trip set by Fincher. She said there are no limits to the possibilities of the trip.

“I want our kids to come back knowledgeable … to see the entire world as a community,” Fincher said. “I want them to realize that they can do great things and make an impact wherever they go.”

The Go Fund Me account is still open for donations. Additional funds will go toward out-of-pocket expenses such as team t-shirts, tips for drivers and tour guides and lunches. Money raised from the Zumba fundraiser will go toward such costs.

Fincher and the seven Bradley Tech Globetrotters will begin their international journey April 3.