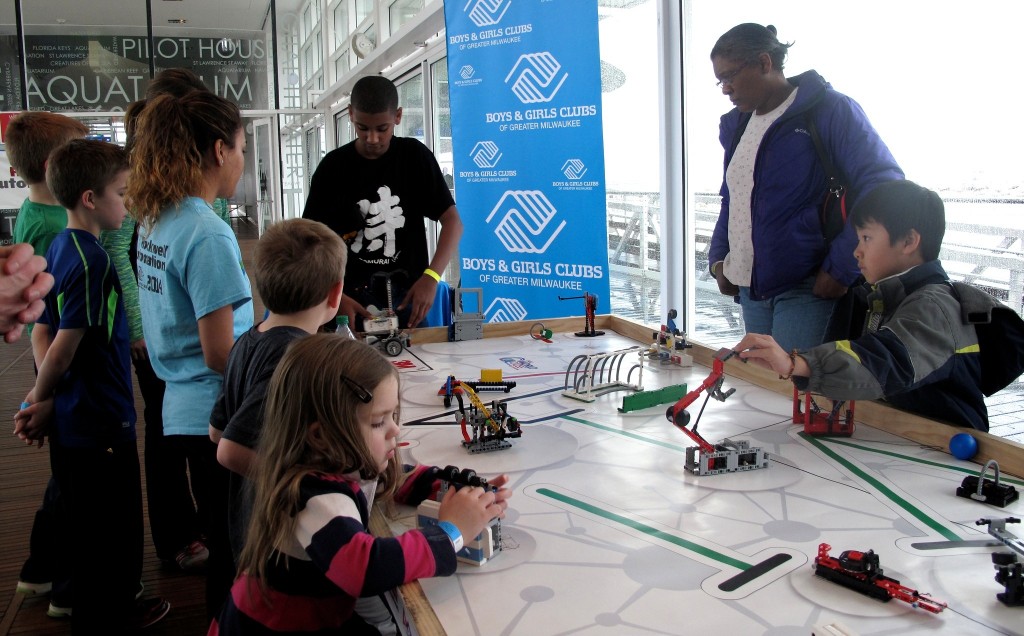 When 14-year-old Jose Favela pushed the start button on his perfectly positioned Lego robot, months of work rested on its ability to move forward, stop at the right moment and place a ring on the little plastic arm in front of it.

Favela, a member of one of two FIRST (For Inspiration and Recognition of Science) Lego League teams from Davis Boys & Girls Club, displayed the robot at the Discovery World Science and Technology Center alongside Rockwell Automation engineers and other local teams during National Robotics Week.

“The goal here is to create a culture where science, technology and especially robotics are understood and celebrated,” said Kevin Kolodziej, Discovery World’s automation educator. 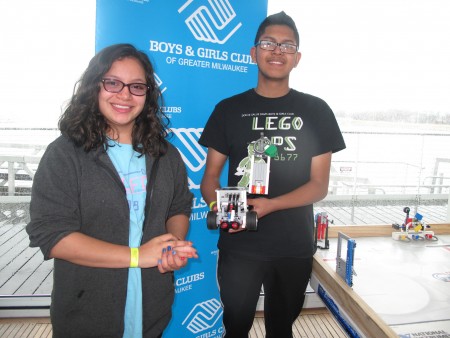 Valentina Estrada and Jose Favela were among the students from the Davis Boys & Girls Club who participated in National Robotics Week.

Rockwell and Discovery World’s work with the Davis Boys & Girls Club over the past few years has been focused on creating networking and education opportunities for students such as the National Robotics Week demonstrations.

“The Davis club is especially important to us because it’s named after Don and Sallie, and Don Davis is our former CEO. We have a very long partnership with the Boys & Girls Clubs,” said Patricia Contreras, global community relations and contributions manager at Rockwell. Rockwell also supports a variety of FIRST and other STEM (science, technology, engineering and math) programs, she added.

The Davis Boys & Girls Club teams, one all girls and one co-ed, each began work on their robots in August and participated in a regional competition last winter. Along with programming and building their robots, each team also presented research to the judges. The girls’ team researched the effects of global pollution, while the co-ed team imagined the creation of a universal language translator.

“I like programming,” Favela said. “For my career, I want to be a software engineer [or] video game designer. So doing all of this makes me interested in working for Microsoft and other companies. I’m learning a lot.”

The FIRST Lego League is part of a larger initiative that is being piloted at Davis in an effort to expose children to STEM-related careers. The Boys & Girls Clubs partnered with Rockwell Automation, Milwaukee Area Technical College and Discovery World to make summer programming and Lego engineering courses available for the students. 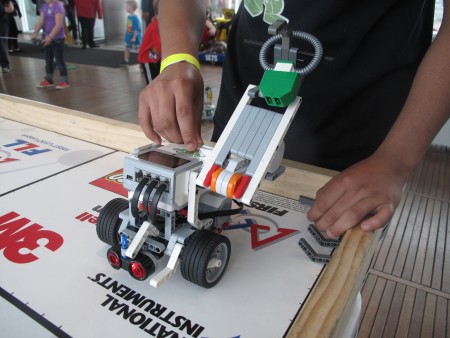 Jose Favela sets up a robot to perform its task. (Photo by Devi Shastri)

“Boys & Girls Clubs is doing their part to expose these kids to opportunities that they wouldn’t be exposed to outside of the club,” said Michel Quezada, the Davis club’s education and career supervisor and coach of the girls’ team. “STEM programming … can be expensive. … We provide a lot of resources to try to get our kids exposed within the club.”

In addition to being a part of the FIRST Lego League, Davis club members have access to many other resources provided by Rockwell Automation. These include field trips to see the company’s headquarters, career exploration through interactions with Rockwell engineers and a “near peer” pairing in which young people are matched with a mentor who has a similar ethnic or educational background.

Contreras said Rogers Street Academy, located at 2430 W. Rogers St., will be teaching a pre-engineering curriculum from kindergarten through eighth grade starting in the next school year. Rockwell also funded a Project Lead the Way lab at the school, based on a nationally recognized STEM curriculum. Rogers Street students also can be involved in various after-school activities at Davis to learn skills from robotics to computer engineering, allowing for STEM immersion every day.

Valentina Estrada, 13, represented the all-girls team at the Discovery World event. It was her third year of involvement with Davis Boys & Girls Club’s FIRST Lego League. Though she does not plan on becoming an engineer, she said has had a lot of fun and gained useful skills from building the team’s robot.

“I learned that …working together is way better to solve your problems and that I shouldn’t just give up because I’m frustrated,” she said. “I should just take time away and then come back later to try to figure out what I did wrong.”