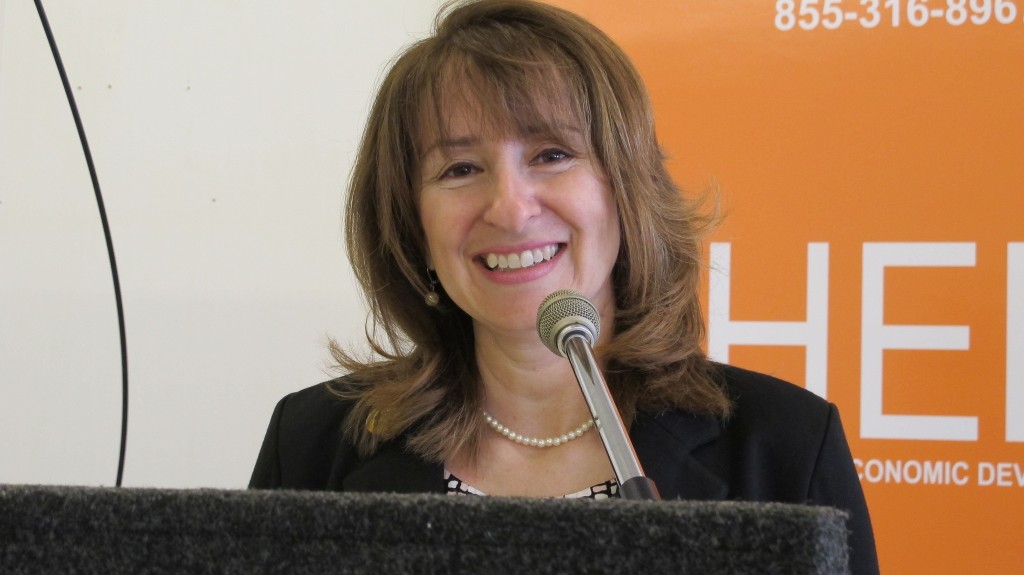 Charlotte John-Gomez speaks at the unveiling of a major initiative to renovate 24 foreclosed homes and businesses in five South Side neighborhoods in 2013. (Photo by Andrea Waxman)

Back in 1999, when Charlotte John-Gomez was hired as executive director of Layton Boulevard West Neighbors (LBWN), the organization ran on a budget of about $70,000 and she had one half-time office employee.

Now, as John-Gomez prepares to transition to her new position as director of Housing and Urban Development’s Milwaukee office of Community Planning and Development, she leaves behind a staff of 13 working with an annual budget of more than $1 million.

She grew the organization, which originally was funded solely by the School Sisters of St. Francis, by cultivating a staff of qualified young professionals and keeping a strong focus on the needs and desires of the neighborhood, said Will Sebern, who will succeed John-Gomez as executive director. Her approach, said Sebern, was to engage everyone, “from the street level partners to the big philanthropic organizations.”

LBWN, which serves the Silver City, Burnham Park and Layton Park neighborhoods on the South Side, has experienced many milestones during John-Gomez’s nearly 16-year tenure, which will conclude at the end of May. 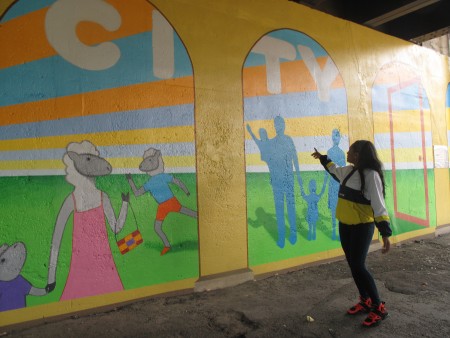 Multiple public art projects, including this mural, have been completed in Layton Boulevard West. (Photo by Teran Powell)

Among the highlights are more than $40 million in leveraged neighborhood investment, 31 new businesses and 116 new jobs created since 2005, the connection of the Menomonee Valley to Silver City and the opening of the newest branch of the Urban Ecology Center.

The major turning point in the development of the Layton Boulevard West neighborhoods, according to Gomez, was the introduction of the Healthy Neighborhoods Initiative (HNI) to Milwaukee in 2006. A program of the Greater Milwaukee Foundation and the city’s Neighborhood Improvement Development Corp. (NIDC), HNI focuses on neighborhood engagement, improving neighborhood appearance and homeowner investment.

“We were fully able to adopt that assets-based approach as an organization and community to make incredible changes,” John-Gomez said. LBWN remains a participant in HNI.

“More and more people are viewing the neighborhood as a great place to live, work and play,” John-Gomez said.

Another huge boon for the community came in 2010 when the Zilber Family Foundation named it as the third neighborhood to be revitalized as part of the Zilber Neighborhood Initiative. Months of one-on-one interviews, focus groups and data collection led to the creation of LBWN’s Quality of Life Plan, consisting of seven overlapping strategies, including improving neighborhood appearance, economic development, social engagement, and youth education and leadership.

According to Susan Lloyd, executive director of the Zilber Family Foundation, John-Gomez pushed along the initiative by making decisions based on hard data that she understood in the larger context of the community.

John-Gomez pushed hard for increased access for neighborhood residents to the Menomonee Valley, according to Ken Leinbach, executive director of the Urban Ecology Center (UEC). Residents now have access to the Hank Aaron State Trail and Three Bridges Park in addition to the crown jewel of the area’s development, the Menomonee Valley Branch of the UEC.

Leinbach said that John-Gomez and her team at LBWN were in many ways responsible for the UEC branch opening in the neighborhood. Their role was in engaging residents and getting them excited about the opportunities that the center would bring.

“They (LBWN) knew us pretty well but many in the neighborhood didn’t and we wouldn’t go into a community that didn’t want our work,” Leinbach said.

LBWN also is dealing with the departures of Dan Adams, neighborhood plan coordinator, Jezamil Vega-Skeels, director of catalytic projects, and Natanael Martinez, economic development manager, who’ve all moved on to bigger arenas, according to John-Gomez.

But, the turnover shouldn’t pose much a problem for LBWN, according to Lloyd. She said one of John-Gomez’s greatest characteristics is her ability to build a team and develop a new generation of leaders.

Besides, Lloyd added, she’ll now be in position to carry on community development on a larger scale for the city.

The mission at LBWN — to engage residents and work with community partners to enhance the neighborhood — will remain the same, according to Sebern, who originally joined the organization in 2011 as a community outreach manager.

Sebern has plenty of momentum to build upon. The neighborhood has changed quite a bit since John-Gomez took over the then-minuscule organization. She and her team have improved the neighborhood to the point that more and more people are looking to set down roots there, according to John-Gomez.

“When you walk around and see people fixing up their homes, picking up garbage and gardening, that’s a testament to people’s confidence in the neighborhood.”