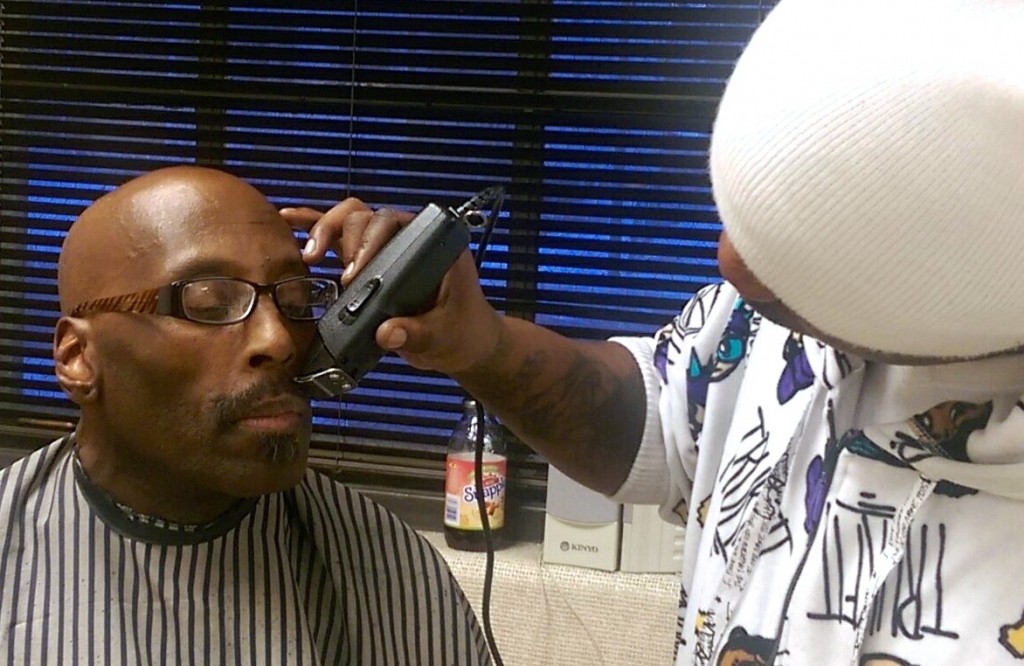 A new initiative by Safe & Sound, the H.O.M.E. (Heroes Operating in Milwaukee Everyday” team, is recreating the barbershop atmosphere and using haircuts and conversation to bridge generational gaps in the Amani and Harambee neighborhoods.

Barbers from the area are donating their services each Monday, their usual day off, to give free haircuts at community centers. The program does more than boost self-esteem through proper grooming, according to Damien Smith, a youth organizer for Safe & Sound in Milwaukee Police Department District 5.

“The benefit [is that] these conversations are taking place,” Smith said. “The haircut is just a plus.”

The conversations change each time and cover a variety of topics, from social perceptions to police-community relations. Smith invites a different guest to join the conversation each week to bring a different perspective. The guest also helps create connections between neighborhood youth and adults. 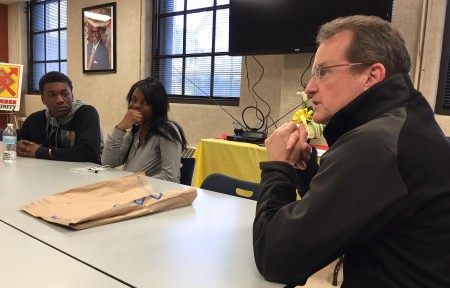 Jim Bohn (right) shares his experiences as a former undercover investigator for the Drug Enforcement Agency with youth in Harambee. (Photo by Wyatt Massey)

Jim Bohn, a retired 30-year veteran of the Drug Enforcement Agency, joined the conversation on a recent Monday at the Harambee Community Center at 335 W. Wright St. Bohn, who is an attorney, worked as an undercover agent in Chicago to stop drug trafficking and money laundering, spoke to four high school students about his experience. This kind of interaction supports H.O.M.E. Team’s mission of positive youth engagement.

“You don’t often get a 16-year-old guy talking to someone out of his peer group,” Smith said.

Chris Murry, 16, listened to Bohn’s stories with special interest. Murry is considering going to law school. He asked Bohn if he ever felt that his life was at risk as an undercover agent. Bohn said that he thought about it “every time.”

“It comes down to good decisions,” Bohn said about working in dangerous situations. “You make choices all day.”

In addition to creating intergenerational dialogue, the young men who come to Barbershop Mondays also are engaging in community service projects. When they come for a cut on Mondays, they provide their contact information so Smith can contact them about volunteer opportunities.

“I call guys up and say, ‘Hey we need you on this day to help with this event, can we count on you?’ And we haven’t had anyone say no. The guys are a lot more likely to help out because we already have a relationship,” Smith said.

The youth are not obligated to participate in the projects, but choose to do so. “It’s like a favor for a favor,” he said.

Some recent service projects have included neighborhood cleanups and distributing fliers for community events. Smith said the youth organized the last neighborhood cleanup themselves, choosing the routes to be cleaned and dividing the participants into teams.

Travis Spell, a barber at Mr. Nick’s Silver Linings at 5932 N. 76th St. and a volunteer at Barbershop Mondays, called the program a “win-win.”

“Hopefully some ideologies will be changed through these relationships,” added Smith.

The program is taking place every Monday throughout the summer and Smith expects it to continue beyond that as well.

About Wyatt Massey and Allison Dikanovic