You are here: Home / Home / Carousel / Clean Slate Milwaukee seeks to provide convicts promise for the future
Share this... 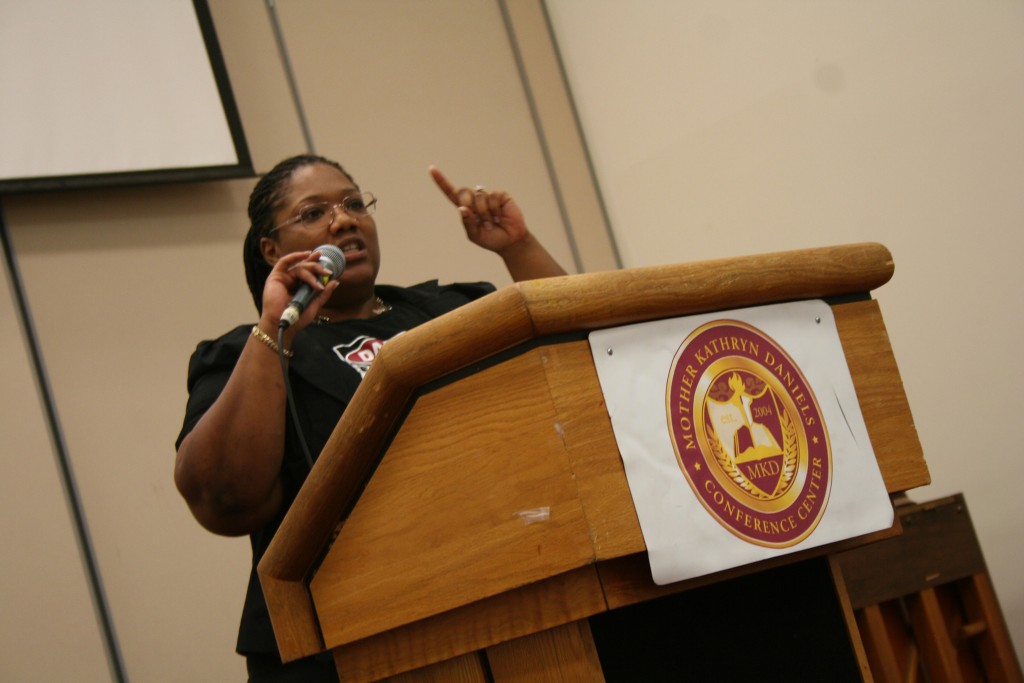 Shanyeill McCloud addresses attendees during an orientation session at the neighborhood summit. (Photo by Jabril Faraj)

Desi Poindexter Jr. sits in a small auditorium on a recent Saturday morning in Holy Redeemer Church at 3500 W. Mother Daniels Way. During the last 10 years he’s “been going through hard times,” not being able to find a steady job. Poindexter, 27, was a two-time felon before the age of 19, having been convicted of fleeing the police after a traffic stop when he was 17 and unlawful possession of a firearm about a year later.

Since then, Poindexter said he has struggled with paranoia and “wondering why everything [has] to keep on happening to me.” Now, he’s determined to push forward. “Me coming out today is my new start,” he said. 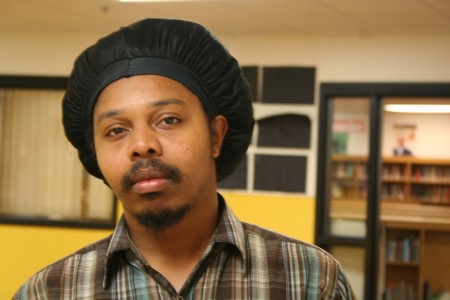 Desi Poindexter Jr., a two-time felon, hopes to get his convictions expunged so he can find a job to support his family. (Photo by Jabril Faraj)

The Wisconsin Department of Transportation has the power to reinstate driver’s licenses, but doesn’t offer help to people who need the service. Ald. Ashanti Hamilton said individual circumstances “cover the gamut.” There are 94 reasons a license can be revoked in Wisconsin, according to Nichole Todd of Wisconsin Community Services. An individual’s case also can be complicated if there are outstanding fines in multiple courts. The Milwaukee Fatherhood Initiative and the Milwaukee Municipal Court helped attendees at the event begin the reinstatement process. Other organizations, including WCS, also provide driver’s license recovery services.

Shanyeill McCloud, founder of Clean Slate Milwaukee, addressed the small crowd of mostly African-American men gathered for the morning orientation session. “We can’t leave out the issue of incarceration,” she said. “You can go to any correctional facility … this is exactly what it looks like — it’s filled with black men.”

Clean Slate’s website describes the 3-year-old nonprofit as a “second chance organization” that provides reentry services for young adults (17-25 year old) that have misdemeanor and non-violent felony convictions. McCloud said she came back to Milwaukee from Georgia in late 2010 to educate people on expungement because she understood the hopelessness that comes with a conviction. She was convicted of misdemeanor battery in 2007 after enduring three years of abuse by her then-husband.

She spent some time in a Milwaukee jail and was on parole for about two years. The conviction dashed her hopes of attending Georgia Tech, where she had a scholarship, because as a parolee McCloud was not allowed to leave the state. “That crushed me.”

“You get out and you’ve got this long laundry list of collateral consequences that came with the conviction that you received when you got locked up.”

Poindexter, who has seven children, has been homeless for much of the last 10 years, staying with lady-friends and sleeping in parks and cars. He said he’s had to resort to doing side jobs for cash — such as roofing and cutting grass — and even became a “loan shark” at one point, a venture that ended when people stopped paying him back.

But it’s not just about getting a job. A conviction can hinder someone’s ability to find housing or pursue particular educational degrees, too, said McCloud. In addition, a conviction affects a person’s right to vote, sit on a jury, buy a gun and run for political office, restrictions she said have a long historical and racial component. “That one conviction is going to always keep coming up,” she said.

“It completely removes you [from] civic life,” McCloud told the group. “But I’m here to let you know there’s a way back in.”

Expungement, known more formally as judicial clemency, is the process of making a public record private. Executive clemency, or a pardon, fully restores an individual’s rights, said McCloud. In 2011, Gov. Scott Walker created a pardon advisory board by executive order but never appointed anyone to the board. In 2014, the Wisconsin Department of Administration proposed eliminating the board and the pardon process has been suspended indefinitely, leaving at least 1,400 pending applications unaddressed.

Sentencing judges are the only ones who have the ability to expunge; if they have retired, whoever replaces them has that power. To expunge a record, the individual must write a letter to the judge in which he or she demonstrates remorse, explains how the conviction has been harmful and says what a second chance would mean. Clean Slate helps individuals throughout the expungement process. McCloud said the process is “very successful” as long as a candidate meets the initial criteria.

Legislators have changed the rules to make it easier for convictions to be expunged in every legislative session since 2009, when the age limit (at the time of conviction) was raised from 21 to 25. Since then, it has expanded to include Class H and Class I felonies (non-violent, non-sexual offenses) and, in 2013, the legislature included crack cocaine charges and provided more “restorative” alternatives to conviction. In 2014, it became possible for victims of human trafficking — typically women — to have their records cleaned up.

McCloud said the law is still too restrictive. The 2009 age limit change does not function retroactively — it only applies to crimes committed after July 1 of that year. In order to expunge a felony committed before then, the individual who was convicted must have been a minor — 18 or younger — at the time. She is pushing for that restriction to be lifted in 2015.

“It shouldn’t have an age limit,” McCloud said. “After a certain amount of time, why does it matter? You’ve got people [with] convictions from the 70s, the 80s, the 90s that still can’t get a job today because of their criminal record.”

Expungement isn’t a silver bullet, McCloud said, adding that regardless of what happened, that people have to take responsibility for their actions and environment so the same thing won’t happen again. “You’ve got to be able to change yourself and your surroundings,” she said.

Poindexter has done that soul-searching and said he has wisdom now that he didn’t have when he got his convictions. He’s hoping to get the felonies expunged and recover his driver’s license.

If those things were to happen, he said it would be more than just a second chance. “It’s life again for me … it’s life for my children.”

McCloud isn’t sure if Poindexter will be able to get his two convictions expunged but “it’s worth a try,” she said. At the least, if a conviction can’t be expunged it can be electronically sealed so it doesn’t show up in a computer search.

Clean Slate plans to host an expungement summit later this year. About 800 people attended the first such event, held at the COA Goldin Center in November, McCloud said.

“I’m trying to blow the whistle as hard as I can.”