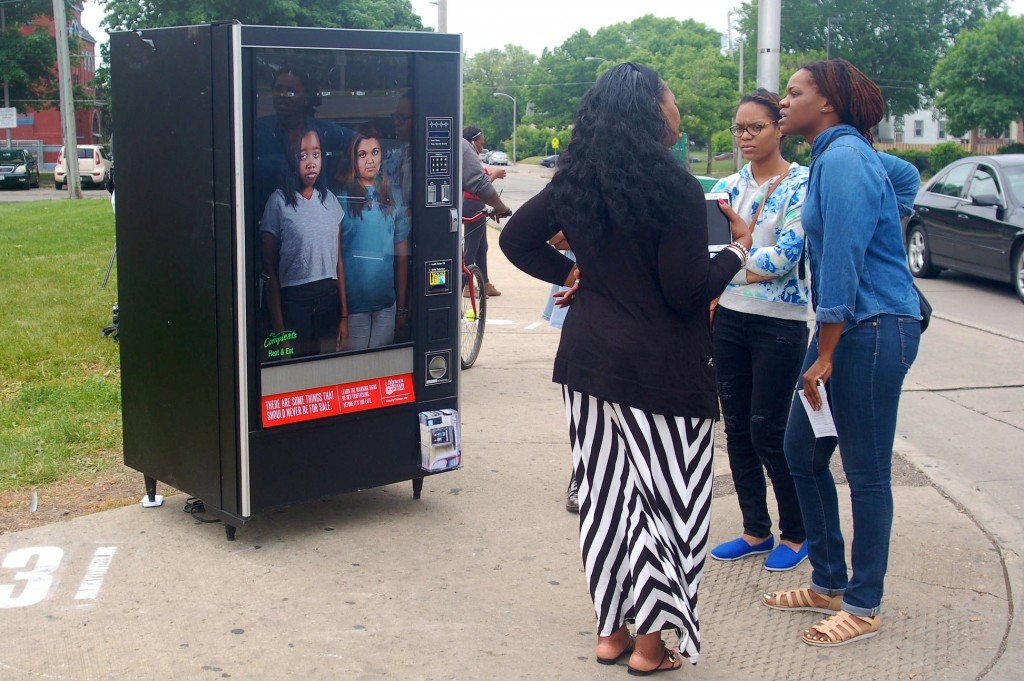 Social worker Jasmine Whiting speaks with young people passing the Children Are Not For Sale awareness campaign in front of a vending machine on North Ave. and 27th St. (Photo by Allison Dikanovic)

Those who approached what appeared to be a working vending machine at North Avenue and 27th Street last week looking for a Snickers bar or a Diet Coke were in for a surprise when they found it filled with an image of two young girls available for purchase.

Rather than candy or soda, the machine contained informational fliers about sex trafficking in Milwaukee as part of an awareness campaign launched by the Human Trafficking Task Force of Greater Milwaukee called “Children Are Not For Sale.” The fliers highlighted warning signs to look for and appropriate action to take in the case of suspected human trafficking.

“Children are not property to be sold for someone’s pleasure. Children should be playing, learning and growing to be positive contributors in our community, not victims of force, fraud and coercion to perform sex acts for the love of money,” said Dana World-Patterson, chairperson of the task force and executive director of Foundations for Freedom, Inc. 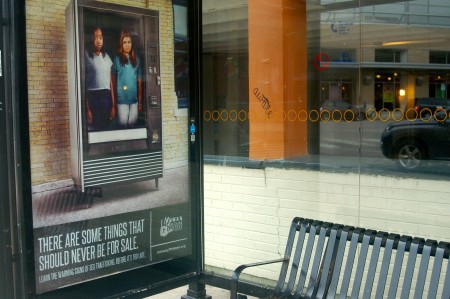 The image of young girls available for purchase covers the bus stop on 27th Street and Forest Home Drive. (Photo by Allison Dikanovic)

The awareness campaign is the result of a partnership among the task force, Serve Marketing and Clear Channel Outdoor. It featured vending machines placed at the corners of 27th Street and North Avenue, 12th Street and Historic Mitchell Street, and Kinnickinnic Avenue and Lincoln Avenue for one day, as well as displays on 15 bus shelters around the city that will stay up for a month. The campaign launched during the last week of school because children are least supervised in the summer.

“I hope the images serve as a wake-up call to parents and teens that sex trafficking really does happen in our city,” said Gary Mueller, the founder and creative director of Serve Marketing. He explained that the campaign’s objective is to make the problem of human trafficking feel urgent and relevant.

“We want parents and neighbors to pay attention. If you see something, say something and do something,” added World-Patterson.

She noted that sex trafficking is taking place in every county in Wisconsin, but “Milwaukee has been considered a hub for human trafficking.” It’s difficult to document the extent of the problem, said World-Patterson, because it is an “underground business.”

Cathy Arney, vice president of community services and a specialist in human trafficking issues at Pathfinders, agreed that the issue is pervasive. “We see youth who have experienced this in every program that we have,” she said.

Jasmine Whiting, a social worker at La Causa, works with victims of trafficking and at-risk youth. She said that girls with low self esteem or an unstable home life are prone to exploitation because traffickers target their vulnerability and offer to support them. “(These youth) get lost in a world that is hard to get out of,” she said.

Arney said that young people who have a history of sexual abuse, have run away from home or are not accepted in their families after coming out as LGBTQ are at the greatest risk. “These are youth who are confused about life and what it means to have someone love them,” she said.

U.S. Attorney Jim Santelle explained that Wisconsin is working to address these types of crimes, but noted, “This is not just a law enforcement problem, and we will not prosecute and investigate our way out of it. The reality is that all of us … are involved in the answers to this problem.”

County Executive Chris Abele said that the outcome of a campaign such as this should be increased action on the issue. “I hope that viewers see these images over the summer and ask themselves, ‘Is this something I want to tolerate in my community?’ and ‘What can I do about it?’” he said.

On the day of the campaign launch, Lauren Wagner, an account coordinator with Serve Marketing, organized a group of interns to facilitate discussions with community members who passed by the vending machines. She said that peoples’ initial response was confusion or curiosity and then they were jarred by the images and surprised to learn sex trafficking exists in Milwaukee.

Laurel Swedowski waits at the bus stop on 27th Street and Forest Home Drive five days a week, and she noticed the new signs on the shelter near her stop. “It’s sad,” she said. “You used to think (human trafficking) was happening in other countries, but it’s scary to think that it could happen right where you live and could happen to kids that you know.”

Editor’s note: This story was updated to correct the spelling of Jim Santelle’s name.