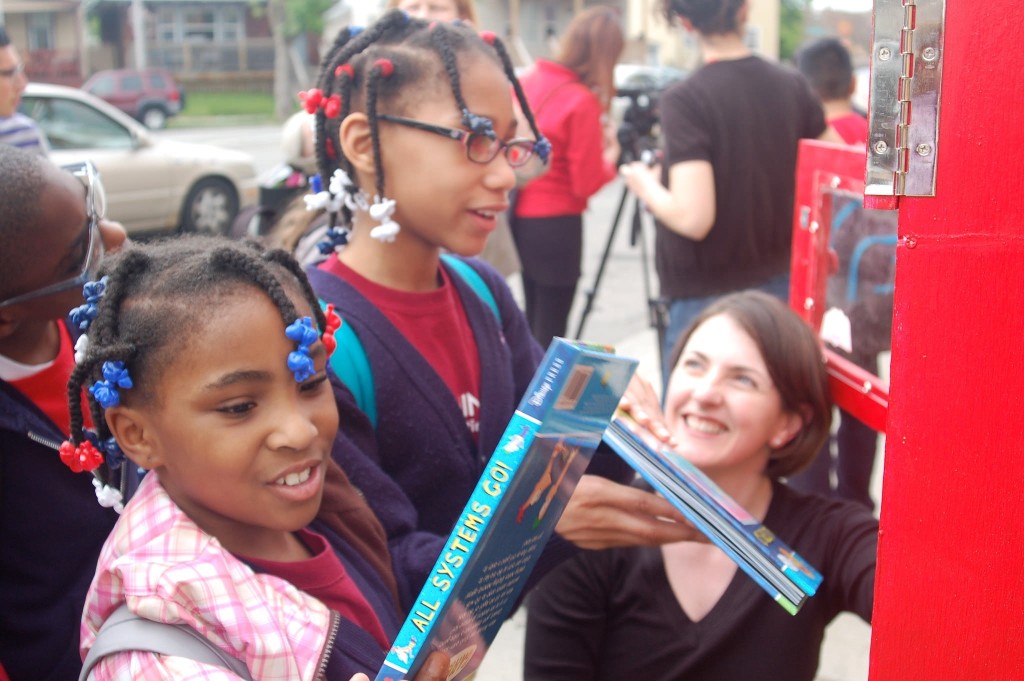 A red wooden box placed outside St. Martini Lutheran School is catching the attention of students and parents alike. It holds books in the bottom compartment, and information about community organizations and free neighborhood resources in the top.

“I like it,” said Lesli Gonzalez, an eighth grader. “I think it’s an opportunity for other people who do not have money to buy books (to get some).” Gonzalez added that the information shelf can be helpful to people without Internet access find resources they need. 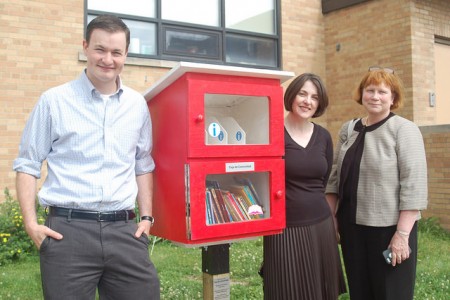 The semester-long project was created by Nancy Flagg, executive director at Ernst and Young LLP, Tony Panciera, senior manager at City Year, and Liz Setterfield, senior donor marketing specialist for the Children’s Hospital of Wisconsin foundation, after they spoke to neighborhood residents about the community’s needs.

“Something we noticed throughout the process was that there was a wealth of resources here in this neighborhood but there was sometimes a disconnect between individuals knowing what the resources were and being connected to them,” Panciera said.

According to Flagg, one common issue the team noticed was the struggle that parents have with English as a second language. The boxes contain information for parents to access free ESL support systems in their neighborhood. Additionally, the boxes could provide connections to resources such as free legal services, transportation and information about reporting incidents to the police.

The boxes were placed outside of St. Martini Lutheran School, 1520 S. Cesar Chavez Dr., St. Andrew’s Church, 1132 W. Oklahoma Ave., and in Pulaski Park, 2701 S. 16th St. The locations were chosen based on the availability of a space for the box and connections the group made around the community.

Architect Dan Kirchen, who has been building Little Free Libraries for organizations around Milwaukee since 2012, modified the design for the Future Milwaukee project. 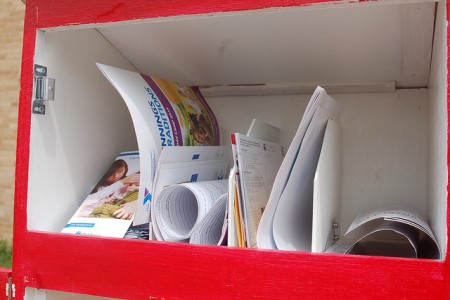 The “cajas” were sponsored by several community organizations and will be maintained by the Don and Sallie Davis Boys and Girls Club. (Photo by Devi Shastri)

“I have a feeling they might show up more often now,” Kirchen said of the new design. “I think it’s neat that it’s got potential to have information about what’s available to (community members).”

Future Milwaukee worked with various South Side community organizations on the project, including Hispanic Professionals of Greater Milwaukee, Wheaton Franciscan Healthcare, the Don and Sallie Davis Boys and Girls Club and the City of Milwaukee Neighborhood Improvement Development Corporation.

The Davis Boys and Girls Club’s Keystone Innovation Group, a leadership development program for teens, will take responsibility for maintaining and restocking the boxes for the community. The Future Milwaukee group also set up a fund to help the club maintain the boxes, purchase more books and possibly build more library boxes in the area.

While the project was tailored for the 16th Street corridor, the Future Milwaukee participants said they also benefitted from getting to know different areas of the city better.

“As a fairly new Milwaukee resident (the project) really helped exposed me to a lot of the amazing organizations and people in the community,” Panciera said.

While the information shelf was well received by students, parents and community members at St. Martini, for many the value of the project remained in sharing a book with others. As Kirchen stood watching the children fill the box, he noted that people donate books they think are interesting or that contain something they want other people to learn about. When you see a book you like, “just knowing that there are other people out there like you — that’s the cool thing about these boxes.”