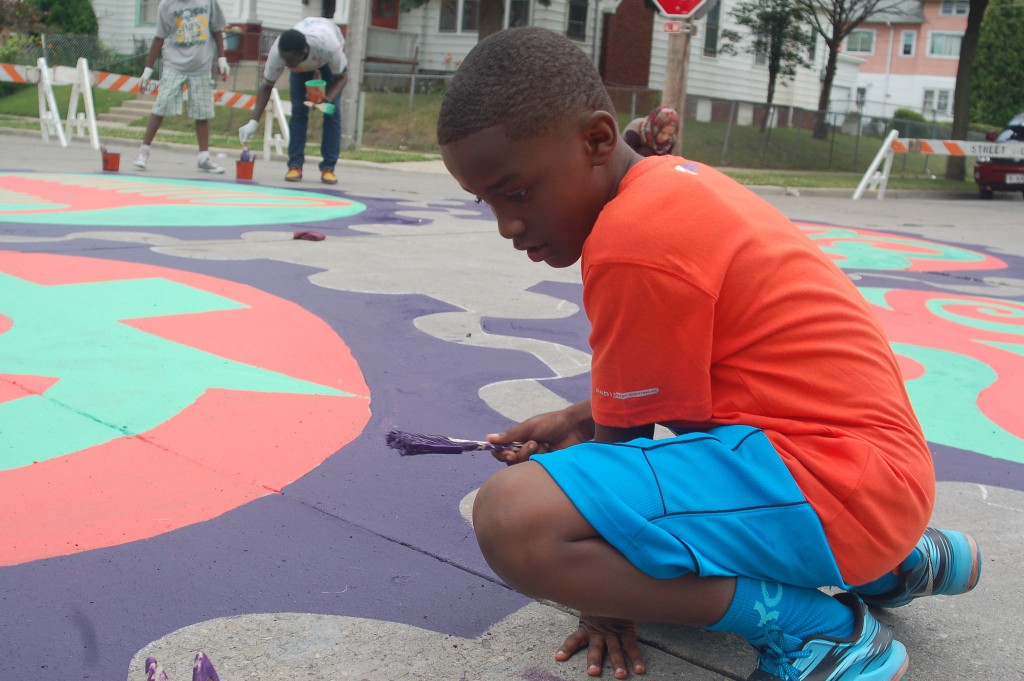 Kenari Parr, 8, paints a portion of the mural. (Photo by Devi Shastri)

On a recent overcast summer day, Latonya Fortson wandered out of her Lindsay Heights home with her young daughter to go see the art project that had closed off half a block of traffic outside her house.

“I think (it’s) amazing,” Fortson said as she looked down at the colorful interlocking gears painted on the street. “(It’s) definitely a positive addition to the community. Because we have a lot of children around, especially on this block, and during the school months, we definitely need something to slow down traffic. … I love it.”

The mural features four interlocking gears, each of which contains a West African adinkra symbol chosen by Hopkins-Lloyd CLC students for its applicability to their community. The first, “aya,” depicts a fern plant, which symbolizes toughness. The second, “hyewo nhye,” means unburnable, or indestructible. “Sancofa” translates to “look to the past to build for the future.” The final symbol, which means “help me and let me help you,” conveys the idea of interdependence among community members. 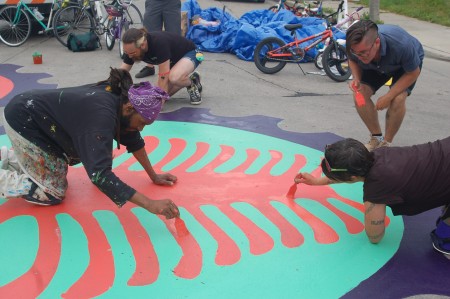 “I always like to work with African cultural themes,” said lead artist Ammar Nsoroma. He and the CLC students began cutting out large cardboard stencils and learning about adinkra symbols four days before they painted. The students also got sketching lessons from Nsoroma on how to draw the symbols. It all came down to whether the intersection could be painted in a day.

“It’s great that we all could come here and work together, else it wouldn’t have gotten done in the time limit that we had,” Nsoroma said.

Students in the CLC were involved in painting the mural and choosing which symbols to use, giving them an investment in the piece and a rare chance to play in the streets.

“It’s kind of exciting to see African symbols,” said 8-year-old Kenari Parr. “We get to see what they look like.” Parr lives on the same block as the mural, and said he is excited that it will be there for several years for people to enjoy.

The Wisconsin Bike Federation played a large role in the project. Youth Education Program Manager Jake Newborn said this was the first time the organization collaborated on such a large project. The Bike Federation also offered bike safety education camps to children in the Hopkins-Lloyd CLC and gave away free children’s bikes and helmets on the day the mural was painted.

Newborn explained that the mural is about more than beauty; it also makes the neighborhood safer. He said the group chose the intersection to supplement the traffic-slowing effects of a nearby roundabout. The CLC students had conducted pedestrian counts and recorded traffic speeds in the spring to better understand the traffic in their neighborhood. The mural and the roundabout ideally will make drivers slow down near the school, and where children are present, Newborn said.

The project was created through Artists Working in Education, in partnership with COA Youth & Family Centers and Milwaukee Public Schools, in addition to the Wisconsin Bike Federation. Burning Man Arts, MPS Partnership for the Arts and Humanities and the Milwaukee Arts Board also provided support.

“It’s been a lot of hard work and dedication, working with the community partners,” said Bernadette Jones, the CLC site coordinator for COA Youth and Family Centers. “We’ve been working on this the last couple of months, trying to implement, delegate and work together. I’m just happy and excited that the day has finally arrived.”

A.W.E. painted another mural in June in the intersection outside Doerfler Community School in Silver City. A.W.E. Executive Director Beth Haskovec said the group has not heard much about whether the piece slows traffic because school has not been in session. Still, she believes that the impact of such projects is clear.

“It really is just showing that there is investment happening around the school,” she said. “The artwork is one way of communicating with the neighborhood that kids are here, so (they) pay attention — and that we can do really fun things that help raise awareness using artwork.”