You are here: Home / Home / Carousel / Police Ambassadors provide bridge between officers and community
Share this... 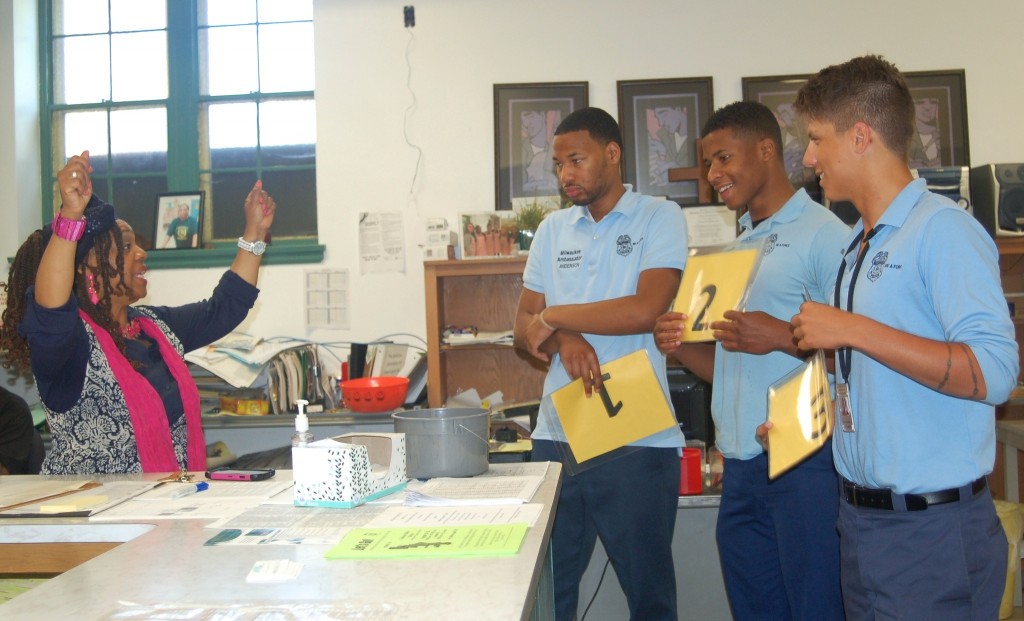 When participants in the Milwaukee Police Department’s Police Ambassador program were given the chance to choose a service project, Shenise Hill knew exactly what they should do.

Hill, one of 15 students in the program, thought back to the many community speakers who had addressed them in their classes. She remembered Pastor Teresa Thomas-Boyd of Central City Churches and her mission to serve Milwaukee’s poor. The students decided they would give back to the community by bagging food and stocking the food pantry run by Central City Churches at Our Savior’s Lutheran Church. They also helped in the kitchen and signed people up for the church’s various services.

“I like (volunteering here),” Hill said as she washed dishes. “I’m thinking about coming back on my own time.”

The ambassadors’ early morning service project is just one aspect of the Police Ambassador program, which started in March 2015 and will run through the end of the year. This is the first group to go through the program, which has been an educational opportunity for students and police officers. 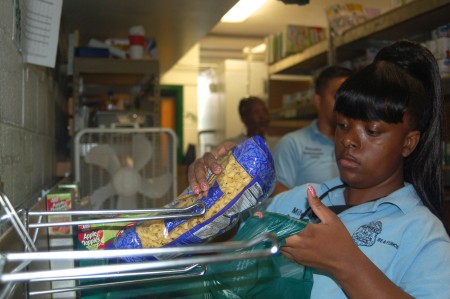 “I have learned so much from (the ambassadors),” said Leslie Silletti, who helped create the program when she worked for mayor’s office. “It’s just been wonderful working with them.” Silletti is now vice president of the Milwaukee Area Workforce Investment Board’s Policy and Development Fund.

The program, started by Mayor Tom Barrett and police Chief Edward Flynn, aims to provide young adults with more opportunities for transitional jobs as part of the Compete Milwaukee initiative. Participants range in age from 19-25. They are paired with individual mentors through MPD and spend 20 hours a week working in various police department offices around the city. They also spend four hours a week in police academy training, where they learn resume building and leadership skills, according to program instructor Elizabeth Ledesma.

“(The program allows ambassadors) to get involved in civic life and work side by side with law enforcement to prevent crime,” Ledesma said. “It has been phenomenal learning and growing with them. (We) hope they become law enforcement personnel.”

The program also provides students with skills that will help them in any field. Of the 17 initial ambassadors, two left the program early because they found employment. Some are considering a career in law enforcement, public safety or criminal justice, including 19-year-old Kalin Welch.

“(We have) the opportunity to join (the force) and to work in different departments,” he said. “I would recommend (the program) to a lot of people.”

By interacting with officers and reaching out to their community, the ambassadors act as a bridge between the public and the police. This dialogue is critical at a time when trust between the police and minority communities remains strained on a national level following high-profile police shootings.

“(As police officers), we see people when they are at their worst,” said Sgt. Richard Kelly, a Police Academy instructor. “As I’m coming to the end of my career, it’s good to be around young people who are positive and want to get involved, including in law enforcement. (Sometime you) forget there’s a lot of good people … (this) helps give a good perspective.”