The brightly painted performance and gallery space at TRUE Skool vibrated with energy and anticipation at a recent gathering showcasing the teen participants’ summer work at the youth arts program.

“I had a chance to hear a few of you practice last week and was so moved by the thoughtfulness and effort that you put into honoring your sister’s stories,” Katie Mullen, youth mentor and board vice president, told the young male performers. Domonique Whitehurst reads his original poem about lessons Tracy Rolkosky is learning from the challenges of poverty for “My Sister’s Story.” (Photo by Andrea Waxman)

Each young man interviewed a teen woman about challenges she faces and then created a work of art — dance, original music, poetry or visual piece — that conveyed his view of those struggles. The goal was to build deeper, more respectful relationships through open, authentic communication.

Mullen and other members of the FROM HERE TO HER Artist Collective brought the project, “My Sister’s Story,” to TRUE Skool. First exhibited at the collective’s annual Women’s History Month exhibition in March, the original concept “was meant to push back against how popular culture has normalized competition among women and ‘mean-girlism’ by demonstrating the power of reaching out, listening to and empathizing with other women,” Mullen said.

TRUE Skool Program Director Shalina Ali suggested pairing the young men with young women. The project allowed the teens to connect with one another in a nonsexual way, something that can be hard for teens to do, Ali noted. 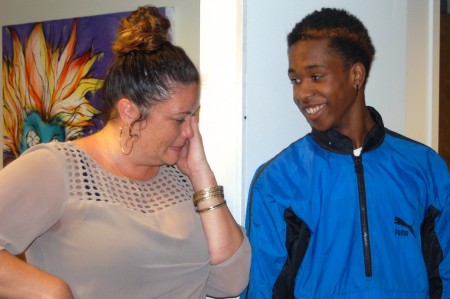 Hearing about experiences from the young women’s perspective was enlightening, Mullen said. “One of the male students partnered with a girl who told him about being catcalled in her neighborhood and being sexualized by men in general. It made him understand the seriousness of it, how damaging those kinds of things can be and the effect it can have on a young woman mentally.”

Domonique Whitehurst, who was partnered with two young women, said the project “put me in their shoes and I tried my best to interpret their lives in my style of writing.” He was surprised to learn that Tracy Rolkosky had grown up in an impoverished neighborhood with a drug-addicted brother, and was inspired by her strength in overcoming many obstacles.

“Tracy kept moving forward with her life, not letting (her challenging situation) burden her and stop her from continuing on in her education and working,” Whitehurst said.

Founded in 2005, the mission of TRUE Skool, 161 W. Wisconsin Ave., is to use urban arts to engage youth in social justice, community service and civic life.