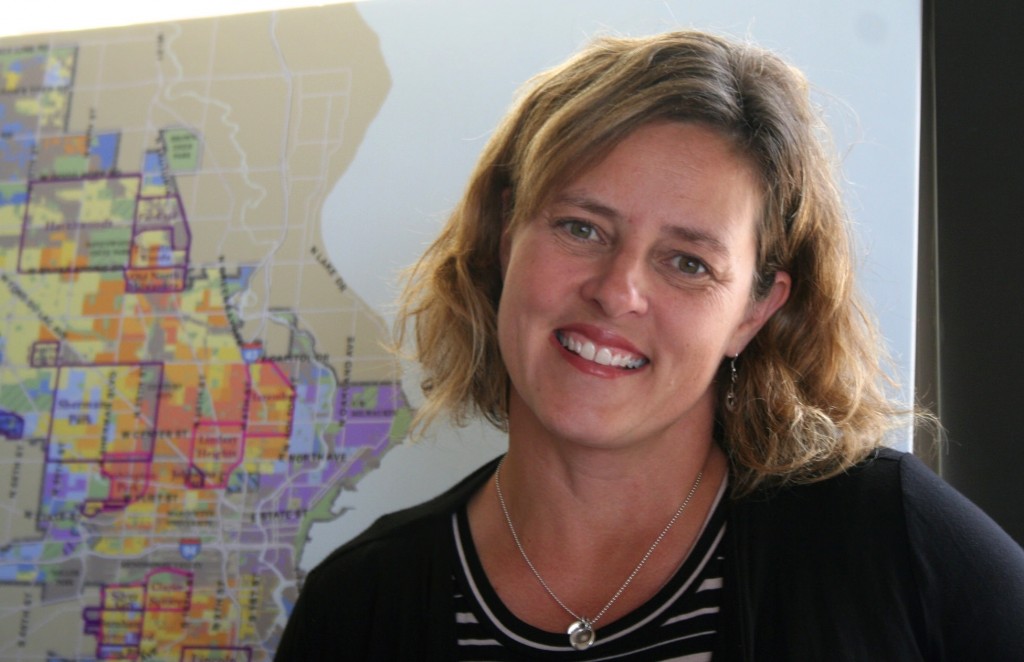 Laura Bray’s new office in the southwest corner of the fifth floor of 660 E. Mason St. overlooks the site of the new Northwestern Mutual Tower and Commons project near East Mason and Cass streets in downtown Milwaukee. Glimpses of blue can be seen through cracks of concrete and steel but the unimpeded view of Lake Michigan that existed for 10 months until construction started in March is gone for good.

Change is also in the air at LISC Milwaukee, where Bray has begun her tenure as executive director, replacing 15-year veteran Leo Ries. LISC will be moving to new offices at the beginning of next year, as well.

Bray, who describes herself as a “collaborator,” was the executive director of Menomonee Valley Partners from 2004 to 2014, overseeing the completion of the Hank Aaron State Trail and creation of Three Bridges Park, where the Urban Ecology Center opened its third Milwaukee branch. The effort brought together partners including the City of Milwaukee, the Department of Public Works, Wisconsin Department of Natural Resources, Layton Boulevard West Neighbors (LBWN) and more.

“The work of improving cities and improving neighborhoods [has] evolved over time,” Bray said. “It really does require so many stakeholders at the table working together.”

“Laura has definitely had a strong track record of … revitalizing the Menomonee Valley,” said new LBWN Executive Director Will Sebern. 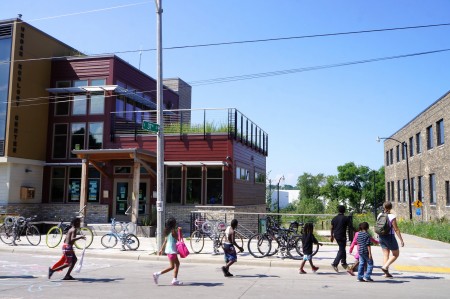 Of LISC, he added, “They’ve been a great partner in our efforts to build strong neighborhoods in Milwaukee,” which he defined as places where “neighborhood residents, homeowners, business owners, other stakeholders are investing their time, their money and their talents into the community’s continued growth.”

Bray served as head of biosciences association BioForward for a stint of six months but said the position, which would have necessitated her spending most of her time in Madison, didn’t end up being what she’d hoped for. “My family is here and my passion is here,” she said.

After graduating from Marquette University in 1994, Bray, who grew up in Milwaukee, spent two years in Bridgeport, Conn., working on a LISC project. As a community organizer in a neighborhood that was just beginning to see investment, Bray “did some of the up-front organizing and meeting with residents” to determine which projects to pursue first.

“I would say that Laura is a thought leader and definitely a person that attracts resources,” said Sharon Adams of Walnut Way Conservation Corp., who has previously worked with Bray. “I have gone to Laura over the years in that capacity.”

LISC is well known for its financial stake in Milwaukee neighborhoods. Since 1995, the organization has invested more than $120 million and generated more than $365 million in development in the central city. LISC supports initiatives in Clarke Square, Harambee, Layton Boulevard West, Lindsay Heights and Washington Park. The organization’s website says it seeks to build sustainable communities using a five-part strategy, which includes stimulating economic activity, investing in housing as well as improving access to quality education and increasing family income and wealth.

“I would like to see … more investment directed toward investing in people,” said Rick Banks, Harambee Great Neighborhood Initiative community engagement specialist, who added that improving the long-term economic stability of individuals is important.

“Higher educational attainment, training, better access to jobs, better jobs, period — those are the kind of things that improve stability,” he said. “And, when people are stable, they’re more likely to invest in their neighborhood in terms of actively wanting to be involved.”

When it comes to how to improve neighborhoods, Bray acknowledged the benefits of an asset-based model, which is centered around identifying unrecognized assets. “You have to take a more holistic approach (to community development),” she said.

So far, Bray has concentrated on just that — identifying assets. “Where do people go to seek change or to seek individual assistance on something?” she said. “Who are the people that are trusted in the community who people seek for advice?”

“There’s a lot of those people within a community.”

At the same time, Bray made it clear that she doesn’t want to “start from scratch” and that LISC “can’t be everything to everybody.”

“At the end of the day, not any one institution is going to be able to solve all the problems — it has to be working together in partnership,” she said, adding that her job is to figure out, along with stakeholders, how best to distribute resources.

Adams added, “I think that LISC will be very firm in its commitment to help neighborhoods strengthen.”

Bray noted that working together to improve a community “is a fluid, dynamic process” and that the work never really ends; the focus only changes. She said, “It’s not … just a target that you reach and then you move on.”