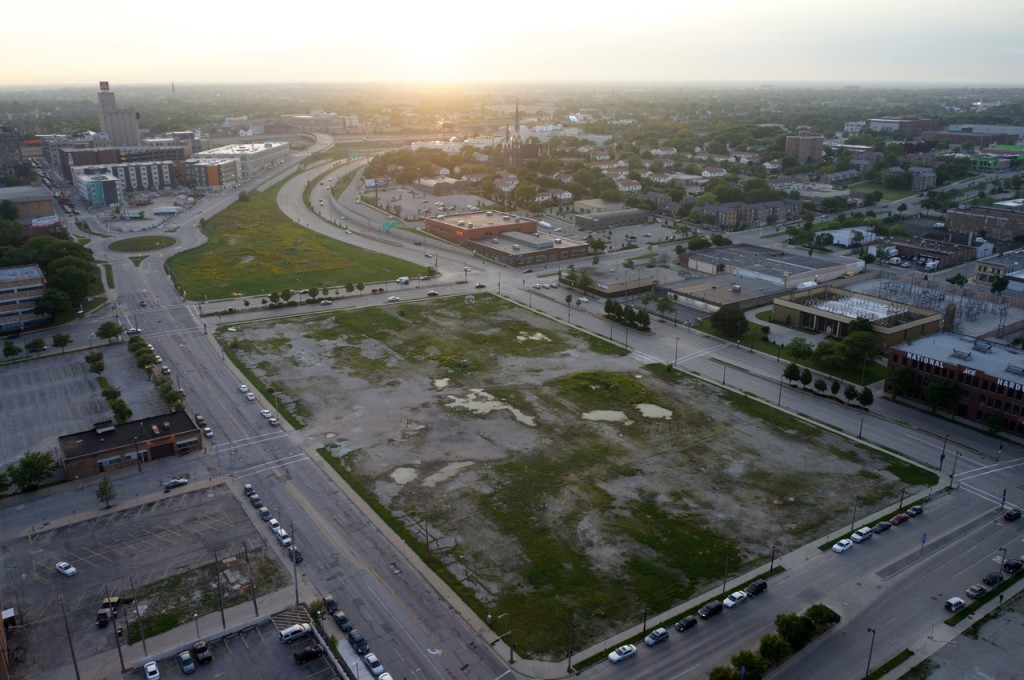 Looking down on the proposed site for the new stadium. (Photo by Adam Carr)

Virginia Small, a researcher on public-interest issues and volunteer teacher at the Dominican Center for Women, write that Milwaukee’s Common Council should designate funding only for arena construction, not public-asset giveaways.

State and county funding has assured construction of a new Milwaukee Bucks arena. City residents will help pay for this arena through taxation by the state, county, city and the Wisconsin Center District (WCD), which supports conventions and tourism.

Milwaukee’s Common Council will soon review and vote on an independent funding package, possibly as soon as Sept. 22. Three public hearings will be held starting Aug. 31.

Virtually all proposed city funding would assist the Milwaukee Bucks in creating a vast entertainment monopoly beyond the arena. That would include so-called public plazas controlled by the Bucks or its affiliates.

Mayor Tom Barrett wants the city to subsidize a Bucks-owned, for-profit “entertainment” mall through a pretzel-like scheme designed for the Bucks’ gain and taxpayers’ loss. The city would raze its 4th Street garage (built for $30 million), give the land to the Bucks, and build a new garage two blocks away. Taxpayers would inexplicably split parking income with the billionaire Bucks owners.

As a separate issue, the mayor has voiced concern that the state’s deal heavily burdens the WCD, which could hurt Milwaukee’s convention and tourism business. To remedy that, the Common Council could insist that city funding only support arena construction and reduce WCD’s borrowing.

To that end, residents should urge Common Council members to consider the following:

The gifts go way beyond announced public-asset giveaways and $250 million in cash borrowing, which will cost taxpayers at least $400 million with interest. Many planned city subsidies are barely mentioned.

It’s whispered that the council will simply go along with the proposed deal, as other politicians have done. However, there’s no reason for elected representatives to act as rubber-stampers. Democracy is a use-it-or-lose-it public enterprise. It’s up to citizens to petition their representatives, whether in person, by email or phone.

Public hearings will take place in Room 301-B of City Hall, 200 E. Wells St. Citizens will be allowed to speak briefly. The first meeting, of the council’s Steering Committee, will take place on Monday, Aug. 31, at 4. p.m.