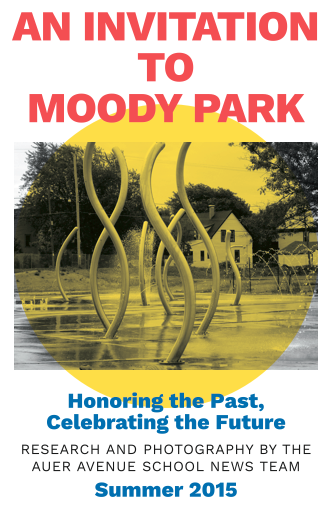 In the summer of 2015, students at Auer Avenue School learned important and timely community history, exploring the past of Moody Pool, just as a new Moody Park arrived. Community leaders and longtime Amani residents visited their classroom, sharing stories and memories of Moody Pool with the students, all of whom were too young to have experienced the pool while it was still open.

Throughout this project, 3rd-6th grade students at Auer Avenue School honed their skills as interviewers, writers, artists, and photographers. They even visited the construction site to watch a new park being built in their neighborhood. The students’ research and photographs were turned into a booklet, “An Invitation to Moody Park”.

The booklet was distributed at the park’s grand opening on August 20th, 2015 and can be downloaded in its entirety here.