You are here: Home / News / Arts and Recreation / Generations of young men learn about life, football from sports league
Share this...

Kendall Johnson raised his voice to be heard above the cheerleaders and boisterous crowd celebrating a touchdown. “This means something to me because we can do it together,” he said, referring to his son, who was on the football field playing as part of the Neighborhood Children’s Sports League. “And, besides, you really get excited out here!”

Now approaching middle age, Johnson still has the short, stocky build of the football player he once was while playing for the league back in his youth. He said sharing a passion for playing football strengthens his relationship with his son and the game “keeps something positive in front of the kids.”

Fullback Dedric Willis, 12, plays on one of the league’s nine teams because he enjoys the contributions he can make as a player. “With teamwork if I do it then we can win. I like that,” he said.

League Vice Chairman Earl Ingram has held leadership positions at the 57-year-old organization for the last 18 years. He believes that sports can help shape the character of young players when they are taught well. “I love the game of football, but it’s easy for people to look past us and say it’s only a sport and not see the life lessons being taught,” he said. 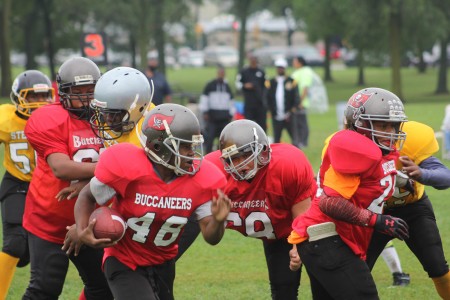 Teamwork and football fundamentals are essential lessons for players in the 57-year-old Neighborhood Children’s Sports League. (Photo by Mark Doremus)

For Ingram and the coaches instructing the league’s approximately 700 players ages 6 to 14, football is a tool for lessons in commitment, leadership and discipline. “We even talk to them about diet because you can’t play football if all you ever eat are flaming hots,” Ingram said, referring to the popular snack made with Cheetos and hot sauce.

“It’s so exciting to see players execute something they learned in practice and then you get that exhilarated look on their face during a game that says they accomplished something, they did it,” said Floyd DeBow, the league’s chairman. “It could be a block or a catch; whatever they accomplished.”

Playing sports has guided generations of young people towards becoming more responsible, mature adults, but Ingram said it may have an even more critical role in Milwaukee now. “In the 1970s Milwaukee was one of the best cities in America for quality of life for African Americans, but now it’s one of the worst,” Ingram said. With the increased influence of violence and other challenges facing central city youths, “the things we do (at the Neighborhood Children’s Sports League) are more important than ever,” he added.

Susan Allen, who lives in the Thurston Woods neighborhood, said the league has had a positive influence on her son. “They get all their aggression out on the field,” she said. “And I think it helps his schooling.”

Ramaro Hopkins, 9, known to everyone as Bam, said he loves spending time with his friends on the practice field and during games because “we learn something new every week.”

Players come from virtually every neighborhood in Milwaukee and each team in the league has three squads: Pee-Wees, age 6-8; Juniors, 9-11; and Majors, 12-14. High school teams throughout the city are dotted with players who first got their spikes dirty in the NCSL and former players are on the rosters of major college programs around the country, including at UW-Madison, UCLA, Arizona State and University of Michigan, according to Ingram.

Alumni regularly make it onto teams in the National Football League. Lance Kendricks, tight end for the St. Louis Rams, moved on from the NCSL to play for the Wisconsin Badgers before being drafted into the professional ranks. 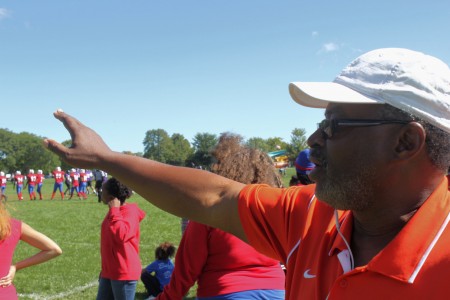 Players come from throughout the city to compete on the field and learn about responsibility and leadership in the process, according to Earl Ingram, vice-chairman of NCSL. (Photo by Matthew Wisla)

While the NFL generates more revenue than any other sport, community football operations at the local level run on shoestring budgets. The league’s annual budget is about $75,000, according to Ingram. It is staffed entirely by volunteers, but a range of expenses contribute to overhead, including equipment, uniforms, insurance, referees for every game and fees paid to the Milwaukee County Park Service for weekly practice time at McGovern Park and games at Lincoln Park.

With growing concern about concussions among football players of all ages, the league invested in new helmets this year. At about $300 each it was a significant expense, but Ingram said the money was well spent and each helmet is expected to last 10 years.

The league has received grants from the Zilber Family Foundation and a Community Block Grant through the city, as well as contributions from individuals and businesses. But its primary source of revenue comes from a $100 fee paid by parents. Families can recoup this cost by selling 100 tickets to the annual raffle at $1 each.

“You don’t mind the money because the kids look forward to it,” Allen said.

Even so, the fee is out of reach for some budgets and Ingram said the league doesn’t turn away players. For example, coaches and league officials sometimes receive calls from extended family members raising young boys. The grandmother may have heard positive things about the league but money is tight. In those cases teams make every effort to pay the fee out of money raised through bake sales, car washes and other activities.

Coaches often become role models and participate in players’ lives and upbringing away from the football field. The mother of a player recently called Coach Evan Kern when her son got into trouble for disrupting his high school class. Kern and one of his assistant coaches met the mother at the school to pay a surprise visit.

“You can imagine how it got his attention to have his coaches show up,” Kern said, chuckling. “I know him and he’s not really bad, but I wanted him to understand that his behavior was absolutely unacceptable.”

Kern, 26, said he wants to pass along what football taught him about leadership and responsibility to his players. He played for the Neighborhood Children’s Sports League before playing cornerback at Texas Christian University, graduating in 2011. “Things I didn’t notice because they didn’t mean much to me at the time I look back on and realize that I learned them here,” he said.