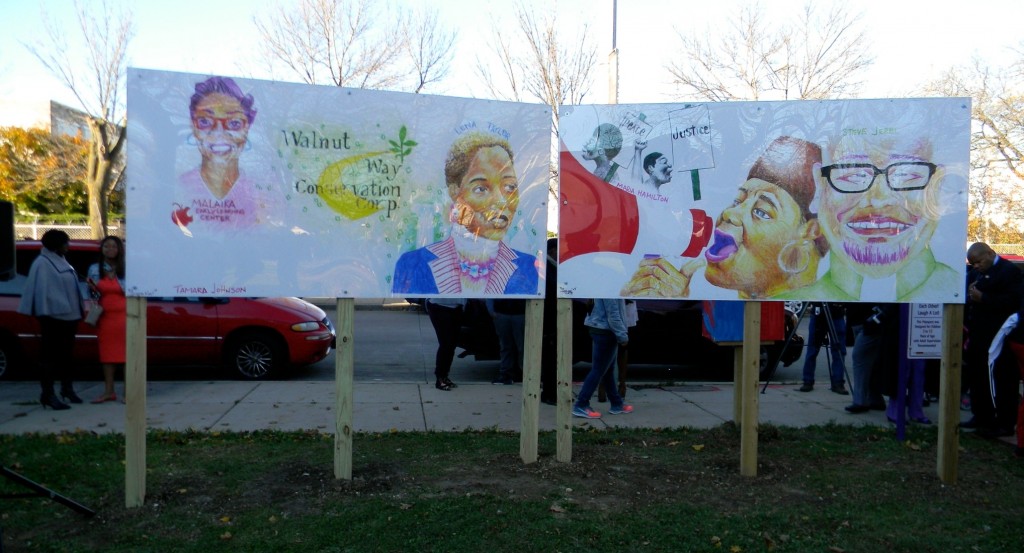 The mural is made up of four separate panels with portraits of Milwaukee cultural leaders on both sides. (Photo by Stephanie Harte) 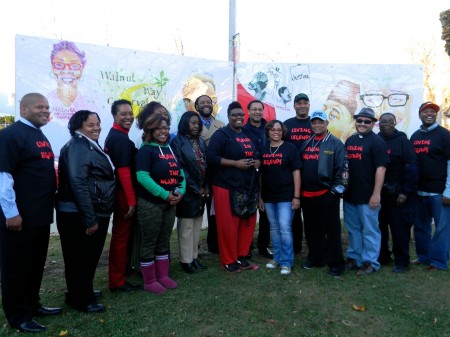 Artist Jasmine West (center, in red pants) and Bridney Chappel, the community arts and culture engagement coordinator for Riverworks (fourth from left), pose for photos with the superheroes. (Photo by Stephanie Harte)

The mural features 18 community leaders who have made contributions to Milwaukee and the Harambee neighborhood. Local artist Jasmine West created the mural by studying photographs of the subjects and drawing their portraits with colored pencils. West said she enjoyed figuring out how to incorporate the bright colors on the portraits of such serious people.

Linear Graphics, a digital printing company, transferred her drawings onto a metal sign, which is secured in the ground with stakes. West introduced each superhero during the mural unveiling last weekend at the playground at 117 E. Keefe Ave. She explained the contributions, or “superpowers,” that prompted her to honor them on the mural.

Chareese Cash attended the event to support her friend Tamara Johnson, executive director of Malaika Early Learning Center, who is featured in the mural. Cash said she believes the artwork will give young people a sense of support by seeing role models they can look up to in the African American community.

“It is important for people to realize that people in this mural give back to Harambee tirelessly,” Cash said.

Johnson said she felt very honored at the ceremony. She added that she was shocked when she found out she was nominated to be featured on the mural because the importance of early education is often overlooked. 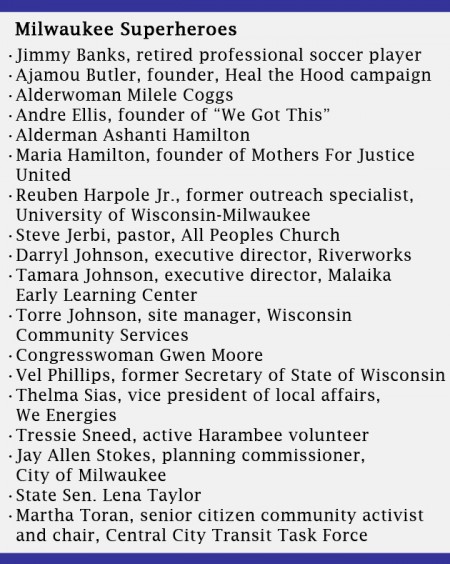 Artists Working in Education (A.W.E.) reached out to Bridney Chappel, the community arts and culture engagement coordinator at Riverworks, for suggestions on who could create the mural. Chappel said she recommended West for the project because of the great work she did sprucing up the playground over the summer with the same superhero theme.

Chappel, West and A.W.E. collectively came up with the theme. Chappel said they wanted to help children feel a sense of pride about their neighborhood.

“Jas has great energy and worked well with the kids,” Chappel said. “I figured since she already started work on the tot lot, she might as well finish it.”

During the first phase of the project, West worked with children attending A.W.E’s free drop-in programming at parks and other public spaces. Artists Michaela Murry, Kailee Evans and MPS arts intern Nia Wilson led the project with West. The team showed the children how to paint portraits of themselves as superheroes, make capes and use proper brush techniques. West said about 130 children worked on the playground during a two-week period.

The community leaders mural took West about a month to complete. Chappel selected the people she wanted featured by researching the subjects and seeking suggestions from Darryl Johnson and some of Riverworks’ partners.

One featured superhero, Ajamou Butler, is a spoken word artist and founder of “Heal the Hood,” a campaign that promotes self-sustainability and nonviolence. “Heal the Hood” has hosted four annual block parties where residents discussed how to end violence in Milwaukee. Butler performed one of his works during the unveiling ceremony.

“We live in an age where you don’t give out roses to people while they can still enjoy them,” Butler said. “This mural to me is a rose. It is a huge blessing, to say the least.”

Butler said it was amazing to see so many black men featured in the mural. He believes it shows that black men can overcome stereotypes.

“Anytime we can look at art together as a community on a beautiful day is a great thing,” said Keith Bailey of Milwaukee Matters, a group aimed to help victims of violence and their families. “We still have a lot of work to do in our city, but it is good to honor those dealing with the issues right now.