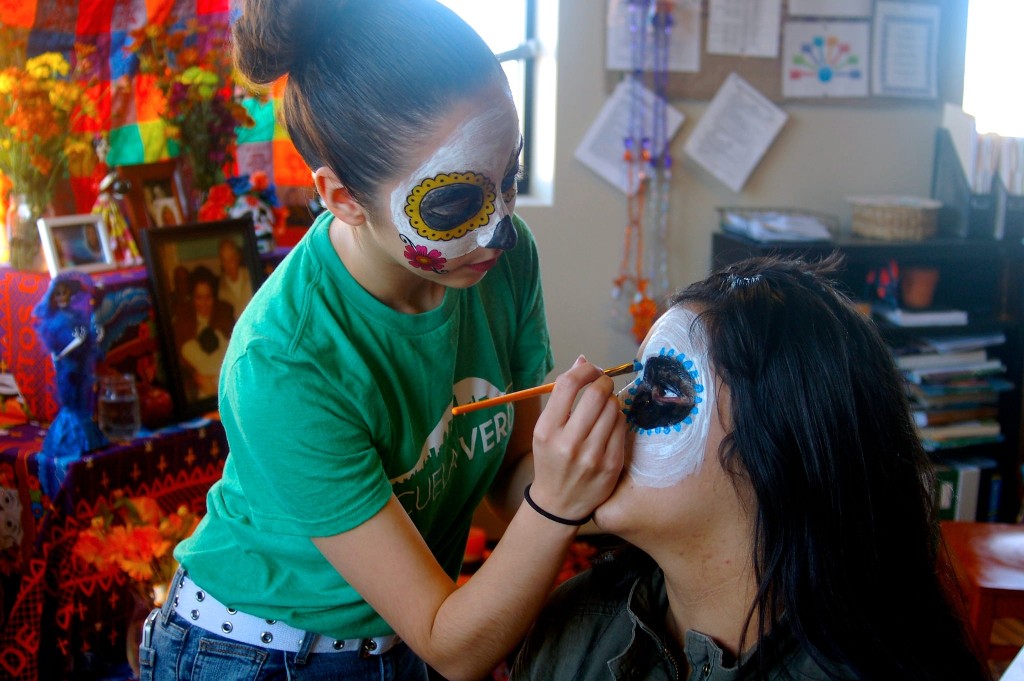 This year’s Day of the Dead festivities gave a group of Milwaukee high schoolers the opportunity to study and understand practices and traditions central to their family histories.

At Escuela Verde, a public charter school at 3628 W. Pierce St., vibrant, intricately cut decorative tissue paper strips called papel picado hung from the ceiling, streaming bright pinks, blues and greens in every direction. Flowers made from the same material were scattered across the tables. Upstairs, an altar featured a rainbow of decorations, photos of deceased loved ones and a plate overflowing with loaves of pan dulce. Downstairs, high school students with faces painted with the beautiful skull designs finished final preparations for their Day of the Dead celebration.

“A lot of people misinterpret what Dia de los Muertos is,” said Isabel Castro, a junior at Escuela Verde. Castro and about 20 other students organized an event celebrating the holiday at their school as part of their bilingual class. 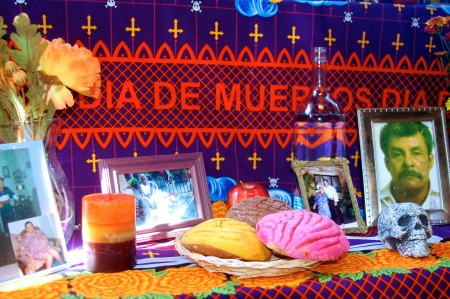 The students built this ofrenda, or altar, to honor loved ones who have died. They designed it according to custom, to include suggestions of earth, air, fire and water. (Photo by Allison Dikanovic)

“We have students that are of Mexican descent, and they are beginning to explore Day of the Dead differently. Some have seen their parents put up flowers at home, but now they can get into the whys and learn all the different aspects because it’s very traditional,” said Cynthia Gonzalez, faculty adviser for the students’ project.

Gonzalez said that planning and facilitating the event was part of her students’ mission to be “bilingual, biliterate and to explore their biculturalism.”

“Not only are they organizing, but they are mobilizing everyone else around them,” said Nicole Acosta, a local artist who supported the students and co-founded the Day of the Dead parade in Milwaukee with Latino Arts. Acosta taught the students traditional techniques and helped plan activities for their event.

Marylenni Vargas, a freshman at Escuela Verde, found personal significance in creating the ofrenda, complete with photos that students brought in of family members who had died. She said she hoped to honor her late brother because it hurt her to think that the best memories and parts of his life weren’t always remembered.

“It’s a way to value the dead ones and really remember them because most of the time, people just forget about the past,” Vargas said. Acosta said one of the main purposes for the altars is to facilitate healing from loss, especially for a younger generation that has experienced violence.

“It’s pretty powerful if you think about it. It’s a way to cope with what’s happened in the past and to reflect on our lives now and how precious they are,” Castro said.

Activities such as decorating skulls and images such as dancing calaveras brought that point home to the students. “Death in the United States is scary. No one wants to talk about it,” Gonzalez said, explaining the holiday as a way to “celebrate familia.”

The meaning behind the day gave Marysol Bermudez, a junior at Escuela Verde, a new appreciation for her Mexican heritage. “I never really looked at my culture this way,” she said. “I want more youth my age to see how beautiful our culture is because they should appreciate it.”

Acosta said the importance of holding onto and passing on this cultural identity is why she got involved with the event. “Over time, a lot of our identity is erased to become part of this American life, and on the way we lose sight of our roots and where we come from,” she said.

Escuela Verde’s entire student body of about 100 participated in the celebration, and those who organized it are already talking about how to expand the event next year to include other schools and members of their wider community.

“We are the future,” Vargas said. “We will make the tradition even bigger than it is.”