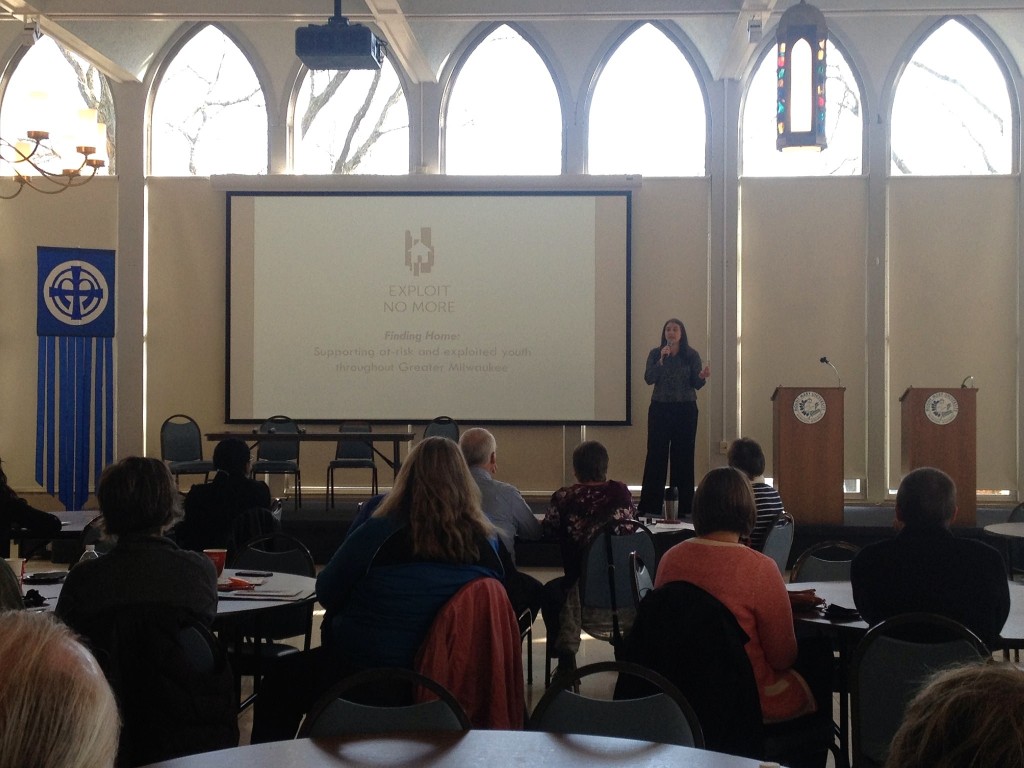 Katie Linn, executive director of Exploit No More, introduces the problem of sex trafficking in Milwaukee. (Photo by Stephanie Harte)

Exploit No More is working to find foster parents for young girls transitioning out of the sex trade in Milwaukee, as part of its mission to eliminate sex trafficking in the city.

“As individuals we are all called to do something,” said Debby Rowe, an Exploit No More volunteer. “It will take a grassroots effort to stop sex trafficking.” Exploit No More also encourages people to get involved by hosting an awareness gathering or making a donation.

Showing a photo of Lambeau Field, Exploit No More Executive Director Katie Linn explained that the total of domestic child sex trafficking victims in the U.S. could fill the Green Bay Packers stadium four times over. 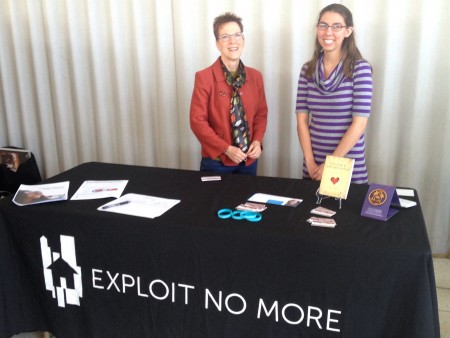 Exploit No More volunteers Debby Rowe (left) and Missy Lueck hand out information on getting involved. (Photo by Stephanie Harte)

As part of a panel discussion, survivor advocate Martha Kuhlmann shared her story as a runaway. She said after three days in the cold with nowhere to eat or sleep, she gave in to one of the pimps who offered her clean clothes and a place to shower and rest. After falling asleep in a bed, she woke up the next morning in a car halfway to Texas, where she was forced to work the streets.

“The pimps will manipulate you by buying you things, taking you to concerts and making you feel special,” Kuhlmann said. “After being put into the sex trade you are taught not to trust anyone and start to believe there is no love out there.”

Kuhlmann was brought into the sex trade at 14 years old and unable to escape until she was 40. Her journey brought her from Minneapolis where she was kidnapped to Dallas, Chicago, St. Louis, D.C., New York, Atlantic City, Atlanta, Los Angeles, San Diego and San Francisco. After leaving the sex trade she began taking classes at Waukesha County Technical College and now volunteers for Exploit No More.

Dwyer said that vulnerable children who do not have an adult to watch over them are often targeted by pimps.

“Kids need an adult who knows them and cares about them,” Dwyer said.

Denise White has been specially trained to provide therapeutic care for children who have suffered neglect or abuse. She has had nine foster children over a 10-year period. White said she normally gets the girls when they are 16 or 17, so they only stay for about a year.

“After my baby boy went off to college I wanted to do something to give back,” White said. “I always loved kids and didn’t find it different than raising my own children.”

Jones, who has worked for the Human Trafficking Task Force for eight years, said her first three investigations began two weeks after being assigned to sex trafficking cases. She became interested in focusing on the topic after realizing she had seen it her entire life and grew up with people who were victims.

“It is important to me to be able to spread the truth on trafficking,” Jones said. “It will take all of us working together to make a dent.”

Corrine Wartenweiler attended the gathering to support Exploit No More and her daughter, who works for the organization.

“I learned a lot through the presentation and panel,” Wartenweiler said. “You normally think about sex trafficking happening internationally and not in our own city.”