You are here: Home / News / Arts and Recreation / Unique art gallery depicts link between diabetes and dental health
Share this...

Sisters Dina and Marcela Garcia found a nontraditional way to deliver information on how diabetes affects oral health in the Mexican-American community ­– they created an art gallery.

“The Milwaukee Diabetes & Oral Health Gallery” was on display in a vacant storefront last month during Diabetes Awareness Month. A virtual gallery will be available on the Cientificas website in early January, according to Dina Garcia.

Dina, a doctoral candidate at the Medical College of Wisconsin, received a $37,000 grant from the National Institute of Dental and Craniofacial Research to explore the factors that influence dental care among Mexican-Americans with diabetes.

She conducted five focus groups, three in Spanish and two in English, with 39 Mexican-Americans with Type 2 diabetes, from June through September. Dina said many participants in the focus group could not afford dental care because they were uninsured. They also said they were discouraged from visiting affordable dental clinics because of long waits for appointments. 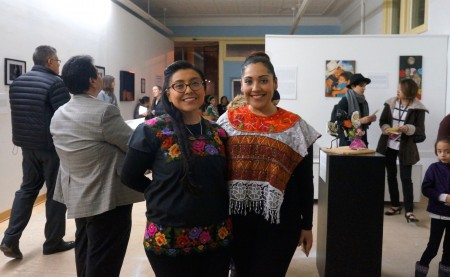 Marcela and Dina Garcia (left to right) welcome guests to the grand opening of their gallery. (Photo by Adam Carr)

After conducting the focus groups, Dina decided to share her findings with a wider audience. She said she didn’t want her research hidden away in a small academic publication that community members wouldn’t be able to access. She turned to her sister Marcela, a member of the City of Milwaukee Arts Board, to curate an art gallery to display the findings.

“For us, art became a medium where we could not only share these findings with individuals, but do it in a visual way,” Dina said.

Each of the seven sections of the gallery had a theme. The first few sections made people aware of the importance of brushing and flossing, and seeking proper dental care. Dina said individuals with diabetes are at a higher risk of developing oral health diseases due to uncontrolled blood sugar, increasing their chance of cavities. The gallery ended by asking community members to advocate for improved dental care access and dental coverage.

Marcela reached out to artists she met through Latino-focused arts events to participate in the gallery. Eleven Mexican-American artists were featured, most of whom had family members directly affected by diabetes.

“Aside from having a personal connection to diabetes, different artists mentioned that this was an opportunity for them to showcase their work,” Dina said.

The artists were asked to interpret a quote from focus group participants. They chose a variety of media, including painting, charcoal, photography and paper maché. Descriptions of the work were displayed in both Spanish and English.

Rosana Lazcano, a local freelance artist, contributed two paintings to the gallery: one of a mother holding her daughter and another of a father spoon-feeding his son. The quote that inspired the two paintings discussed how oral health habits, such as brushing, flossing and using mouthwash, must be taught to children so they can carry on these habits as adults.

“At first I didn’t know how to combine medical findings into my artwork,” Lazcano said. “Then I realized Dina had the hard part of doing the research, all I had to do was relate it back to my community.”

Lazcano said the message behind her two paintings is to “take care of yourself so you can take care of others.” She said she enjoyed working with other Hispanic artists in the area.

“I love that we are incorporating art with science to make a difference and engage the community,” Lazcano said.

The gallery also featured a collection of masks created by a group of Latina girls Dina works with at Cientificas, a program at Hayes Bilingual Elementary School that encourages girls to pursue science education.

“I want to be a part of projects that bring awareness of different health issues within the Latino community and that advocate for better care and services,” Sanchez said.