You are here: Home / Home / Carousel / Former sex offenders left out in the cold by city residency restrictions
Share this... 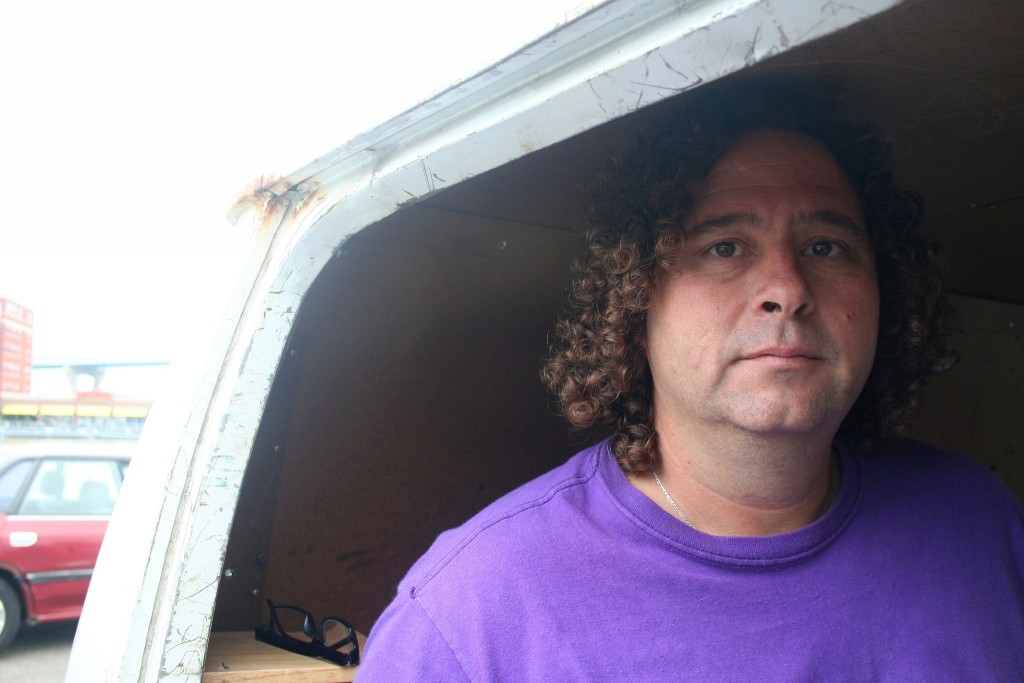 Raymond Rosa sits in the back of his van, which he outfitted with a makeshift electricity system. (Photo by Jabril Faraj)

A City of Milwaukee ordinance passed by the Common Council in July 2014 is making it nearly impossible for former sex offenders to find housing. The ordinance restricts these ex-offenders from living within 2,000 feet of any school, licensed day care center, park, recreation trail or playground.

As of Jan. 16, 2015, the city released a public notice listing 55 addresses — 117 units, according to a Department of Corrections (DOC) field supervisor — where released sex offenders can legally reside under the new law. The list includes private residences that are currently occupied and multiple-unit buildings that have refused to rent to sex offenders.

“We do not in any way represent that these properties are available to rent or live in,” said Milwaukee City Clerk Jim Owczarski, who noted ironically that the list is “the best reference document” for sex offenders trying to find housing.

He added, “It’s frankly not the city’s role … to find housing for sexual offenders.”

Thomas Salter, a DOC field supervisor for sex offenders at Unit 330, said the city ordinance is “the most difficult thing that my agents have to deal with.” Salter said 40 individuals currently under his supervision are homeless.

One of the people affected by the ordinance is Raymond Rosa, 49, who was released on parole in June and is homeless. Rosa and his girlfriend Malina Oglesby, 52, who had a home together before Oglesby filed for bankruptcy, had been staying with her mother with the permission of Rosa’s parole officer.

At the end of June, the couple was kicked out because there were “too many people in one house,” according to Rosa. Since then, they’ve moved from place to place in a van Rosa jerry-rigged with batteries, which provide a small amount of electricity to power the couple’s breathing machines — both Rosa and Oglesby have sleep apnea — and the GPS bracelet he wears on his ankle. Rosa even installed an air conditioner during the hot summer months.

Oglesby said she has seen other homeless people with nothing more than a bag and a pillow. Rosa, who referred to himself as “a survivalist,” acknowledged they’re better off than some but he’s still unsure about what the Wisconsin winter will bring.

Rosa said he petitioned DOC to let him serve out his time on supervision, which goes through September 2016, in prison. Rosa received a letter in response stating a request for voluntary incarceration will not be approved if the offender “seeks to avoid supervision.”

The preamble to the city ordinance that restricts where sex offenders can live calls them “an extreme threat to the public safety” who are “extremely likely to use physical violence and to repeat their offenses.” It says the cost to society is, “while incalculable, clearly exorbitant” and claims the intent of the ordinance is “not to impose a criminal penalty” but to improve the health, safety and welfare of citizens.

“That’s an awfully broad brush to be painting all sex offenders [with],” said Larry Dupuis, legal director at the American Civil Liberties Union (ACLU) of Wisconsin. “People who have been convicted of sex offenses are quite variable. Unfortunately, most of these laws treat them all as identical.”

In fact, nationwide, only 5.3 percent of sex offenders re-offend within three years of their release. More than nine out of 10 had not previously been convicted of a sex crime; most victims are known to the perpetrator; and treatment can have a significant effect on whether or not a sex offender will re-offend. In Wisconsin, sex offenders deemed to be at high risk of reoffending are confined to sex offender treatment facilities under a 1994 law.

Dupuis, who was involved in an unsuccessful challenge to a similar South Milwaukee ordinance, said residency restrictions on sex offenders “are largely driven by misconceptions.” Among them is the idea of the “lurking sex offender,” which Dupuis called “fiction,” and the assumption that sex offenders are more likely to commit an offense closer to their homes.

All 19 municipalities in Milwaukee County have some type of residency ordinance that restricts where sex offenders can live. “The biggest problem with many of them is that they’re actually counterproductive. They make people’s lives less stable,” said Dupuis.

Dupuis added, “They have to live somewhere.”

He noted that an unstable environment can make it harder to access treatment or keep a job; that instability can also estrange a person from family or social support systems.

Dupuis said, “There’s no doubt that these ordinances have created a homeless population,” adding, “if people really want to be safe, the last thing you want is for [sex offenders] to be homeless.” 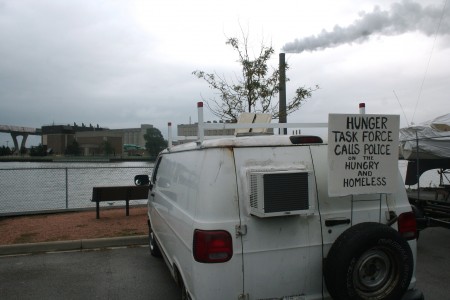 On Monday, Sept. 28, Milwaukee police arrested Rosa on South Hawley Court, a dead- end street where he and Oglesby had been periodically parking to sleep. According to a complaint Rosa filed with the City of Milwaukee Fire and Police Commission, he was taken into custody after a Hunger Task Force employee notified police of a suspicious vehicle. Rosa had an outstanding parole violation, stemming from a problem with the GPS tracking band he wears on his ankle; he said his parole officer had forgotten to remove the bogus violation from the computer system.

Rosa was released less than 24 hours later, and he returned to Hawley Court. According to the complaint, the arresting officer came back to check on the couple the next morning. Then, in the early morning hours of Oct. 1, a member of the police Homeless Outreach Team (HOT) drove Rosa to his brother’s house for water. By later that morning, however, another District 3 officer came to tell the couple they had to leave.

“We decided that we didn’t want him to be there any longer,” said Salter, adding, “we didn’t say anything to him about being in violation of the ordinance.”

Salter said Hunger Task Force Executive Director Sherrie Tussler told him that Rosa had been using a water supply without permission, was bathing in public and had “some rude, inappropriate interactions with staff.” The fact that the couple was staying in the van together also factored into the decision, according to Salter.

Rosa disputes that account. “I showered every day at my mom’s or my brother Joe’s — every day,” he said. “That’s why I stayed there, because it was four blocks from my brother’s house and I could just go there and take a shower every day, and charge up.”

When contacted about the incident, Tussler was not available and Hunger Task Force Communications Manager Julie Frinzi declined to comment.

Rosa said that, after being arrested, he was given permission to return to Hawley Court by his parole officer. HOT coordinator Lt. Liam Looney and Rosa spoke over the phone, as well. “He asked me a specific question about [whether he could] park on the city street by the Hunger Task Force,” said Looney. “And, what I told him was that he can park on a city street just like anybody could.”

But he was picked up again on Friday, Nov. 20. This time, Rosa was held for a week. He said he had stopped on the block to eat. “I can’t even park on that street; my dad’s buried right there,” he said. “I can’t even go visit my dad.”

In general, Salter said Rosa has been “up and down” about following his rules of supervision, which include weekly check-ins with his parole officer and weekly treatment sessions. He said there have been some small missteps but that “they haven’t been really significant violations that required … long-term incarceration or anything like that.”

Salter added, “For the most part, he’s been pretty good about it. He’s been a little bit frustrated with things, which is totally understandable.”

Rosa is afraid DOC is building a case to revoke his parole and send him back to prison. Were that to happen, Rosa would most likely be required to serve the remaining 15 months and 22 days of his sentence.

Joy Staab, director of public affairs for DOC, said, “If an offender who’s on supervision breaks rules, then the Department of Corrections has the authority to proceed with revocation.”

For now, all he can do is wait. “I’m paying my debt to society and I will continue to pay it … then I’ll be gone, then I’ll leave this place … try to start my life over,” Rosa said.

He added, “I’ll find somewhere where they’ll accept me [as] a human being.”

Numbers provided by Milwaukee Police Department Sgt. Timothy Gauerke show that 713 sex offenders are on active supervision in the city. So far this year, 121 citations have been issued in violation of the residency ordinance. “When an individual is cited, offenders can pay the citation or dispute it in court,” he said.

But Gauerke added, “Since someone that is homeless technically does not have a permanent or temporary address, they cannot be in violation.”

According to Dupuis, “The crimes that people have committed, nobody is excusing them. But there are other awful crimes where people get a second chance.” He called the residency law a form of banishment. “For some reason … people have decided that sex offenders can be treated as lifetime pariahs, even if they don’t offend ever again.”

Owczarski noted, “From a policy perspective … the interest was not to find housing for sexual offenders. It was to state those areas in which they could not live.” He added that he doesn’t think the Common Council would remove its restrictions except as part of a comprehensive, statewide solution.

Dupuis noted that in some states, courts are starting to recognize that sex offender laws and, in particular, residency restrictions are bad policy. “They just, essentially, continue the punishment beyond a person’s criminal sentence,” he said.

Wisconsin State Senator Lena Taylor’s office is in the very early stages of researching a possible legislative solution. “I think the state does have a responsibility and I know … my desire is to see legislation done,” she said.

Craig Trost, Taylor’s communications director, said the goal is to create a statewide, uniform policy to give sex offenders a place to live while keeping the community safe. He said the senator intends to introduce legislation some time in 2016.

Until then, Taylor said local governments have “a responsibility to figure out how to help to place those individuals.” She also said there needs to be more cooperation among departments and agencies so that communities know when and where offenders are being released and are prepared to accommodate them.

Taylor added, “I think that we could be more proactive.”